Welcome to the long-awaited blog tour for Love Potions and Other Calamities by Charlie Laidlaw! Follow along for tour details, exclusive content, and a chance to win a signed copy of the book! 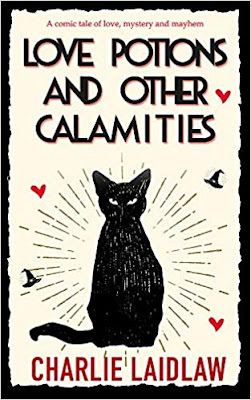 Love Potions and Other Calamities
by Charlie Laidlaw

Love Potions and Other Calamities is pure comedy, with a bit of drama thrown in, as Rosie sets out to discover whether her husband is having an affair and, as the story unfolds, to solve a murder – before she becomes the next victim.

Rosie McLeod, pub proprietor and a gifted herbalist of some renown, is thirty-nine and holding, but only just.  The talons of her fortieth birthday are in her back and her bloody, bloody husband hasn’t laid a lustful hand on her for months.

She has the fortune, or misfortune, to live in one of Scotland’s most famous places – the East Lothian village of Holy Cross, which takes its name from the legendary Glastonbury Cross that was spirited away – and subsequently lost – when Henry VIII purged the English monasteries.  The cross of pale Welsh gold, reputedly buried within the village, had at its centre a fragment of emerald from the Holy Grail.  The story is, of course, complete baloney.

But the association with the Holy Grail and the later witch persecutions of James VI mean that the village is as well known around the world as Edinburgh Castle, haggis or Loch Ness.  It has been described as “the heartbeat of Scotland” and is a major tourist destination – many of whom visit the village with metal detectors, hoping to discover the elusive cross.

However, a sighting of a large, black cat by the local Church of Scotland minister sets off a chain of events that lead back twenty years and, although the villagers are blissfully unaware of it, to a woman’s murder.  The black cat had last been sighted near the village some two decades before, and the minister’s predecessor was sure that it had triggered something evil.  The villagers, of course, think otherwise.

Nothing ever happens in Holy Cross.

For fans of Mel Brooks and Monty Python!
Add to Goodreads
Amazon UK-Amazon

Have you ever began a walk through a peaceful wooded forest just knowing it’s going to be an enjoyable journey; only to find the farther you go, the thicker the forest and less visible the path? You can’t decide whether to turn back or keep fighting your way through the jungle until you reach some sense of a pattern to follow.

Well, that’s what I felt when trying to navigate this book from Charlie Laidlaw. I thought the synopsis I read sounded intriguing: bar owner herbalist, amateur detective, possible witchcraft, black cat, murder and comedy! What’s not to like about that description? Apparently, I missed all of those things in the pages. It took me about 50% of the book to try to make any sense of order to the chapters. I mainly remember a sexually frustrated bar owner, certified as an herbalist, trying to dose her husband with some concoction to boost his desire for her.

The beginning of each chapter had an excerpt from a 13th-century scientist about plants and their effects when used on human conditions. Now I found that interesting (but rather hard to understand in 13th century speaking fashion!) because I have some background in drugs and their originations.

It is hard for me to put in words how I felt about this read. It took me forever to get through because I had no “urgent” feeling to get back to the story and it seemed as if I had to struggle to find a purpose or plot. I didn’t even realize it was supposed to be a comedy until I went back and reread the promotional blurb. Sorry, perhaps it’s just my lack of funny bone?! But, I understood the book more after I finished it that while reading it.

It received great reviews from other bloggers so I think it’s just the writing style that I was ‘lukewarm’ about...and maybe the kind of humor...and maybe the lack of organized thought process...Oh well, I may have to check out another of Charlie’s books to see if this is a “one-off” or overall style.

Don’t let me deter you from trying this, there is some pretty accurate information on the plant and herbal intros from Albertus Magnus’s Book of Secrets!

Excerpt
Coincidentally, Rosie had once owned a black cat, although it was very small, and was eaten by an eagle on the Christmas morning she was given it. That was also the Christmas she stopped believing in Santa Claus. One minute, the kitten was on a scrubby patch of grass in their Sussex back garden, a round ball of black fluff, peering fretfully at her new world; the next, she wasn’t anywhere to be seen until, looking up, Rosie saw large and predatory wings disappear over the farmhouse roof. She was at an age when she knew that bad things happened, but still believed that Christmas Day was somehow exempt: guns fell silent, everyone had enough to eat, and pestilence was postponed until Boxing Day. Her parents tried to console her by saying that eagles weren’t native to Sussex, searching fruitlessly in flowerbeds and, then, in the surrounding fields. In a way, that day had become a metaphor for her life: that in unexpected ways good things can be randomly snatched away. It felt like that now: sagging boobs, carpet slippers, a dreaded birthday – and the revelation of a precise delusion.

About the Author
website-FB-Twitter
I was born in Paisley, central Scotland, which wasn’t my fault. That week, Eddie Calvert with Norrie Paramor and his Orchestra were Top of the Pops, with Oh, Mein Papa, as sung by a young German woman remembering her once-famous clown father. That gives a clue to my age, not my musical taste. I was brought up in the west of Scotland and graduated from the University of Edinburgh. I still have the scroll, but it’s in Latin, so it could say anything. I then worked briefly as a street actor, baby photographer, puppeteer and restaurant dogsbody before becoming a journalist. I started in Glasgow and ended up in London, covering news, features and politics. I interviewed motorbike ace Barry Sheene, Noel Edmonds threatened me with legal action and, because of a bureaucratic muddle, I was ordered out of Greece. I then took a year to travel round the world, visiting 19 countries. Highlights included being threatened by a man with a gun in Dubai, being given an armed bodyguard by the PLO in Beirut (not the same person with a gun), and visiting Robert Louis Stevenson’s grave in Samoa. What I did for the rest of the year I can’t quite remember Surprisingly, I was approached by a government agency to work in intelligence, which just shows how shoddy government recruitment was back then. However, it turned out to be very boring and I don’t like vodka martini. Craving excitement and adventure, I ended up as a PR consultant, which is the fate of all journalists who haven’t won a Pulitzer Prize, and I’ve still to listen to Oh, Mein Papa. I am married with two grown-up children and live in central Scotland. And that’s about it.

For your chance to win a signed copy of Love Potions and Other Calamities, click the link below!