A calculatingly crazy and refreshing romp through the wildest headlines, personalities and peculiarities of the science fiction and fantasy field.

WordFire Press is proud to announce the release of Plumage from Pegasus: The All-New 25th Anniversary Collection, by Paul Di Filippo! 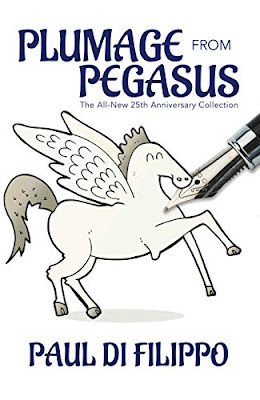 by Paul Di Filippo
December 4, 2019
Trade paperback ISBN 978-1-61475-999-7
Ebook ISBN 978-1-68057-000-7In the manner of Robert Sheckley, William Tenn, Harry Harrison, Douglas Adams, Tom Holt, and other great science fiction satirists, Paul Di Filippo takes on the foibles and follies, tropes and tics of the genre he loves in a wealth of short, sharp flash fictions. Using his four decades of experience in writing and publishing, he skewers authors, editors, artists, readers, retailers, librarians, and book companies alike with fantastical and visionary humor. You'll encounter miniature android authors as playthings and a future where guns are de rigueur and books are banned. You'll learn of the secret collaboration between Wells and Verne, and how civilization was toppled by a DVD sale gone wrong. You'll attend the only school for writers that matters, and witness how an invented language escapes Hollywood to revolutionize the world. On each overstuffed mini-odyssey into Carrollian contrarianism, you'll enjoy sparkling and savage prose and meet folks you'll recognize from a thousand conventions--or from looking in the mirror. The reader's love of good science fiction will be enhanced, and their radar for pretentiousness and fakery will be upgraded to cosmic levels!

EXCERPT A GIRAFFE YOKED TO AN OX: A REVIEW OF "FLORA COLUMBIA: GODDESS OF A NEW AGE"

Before discussing the quality of this recently discovered rara avis manuscript--known to scholars for the past two years, but only now available to the general reader in a handsome edition from Oxford University Press--we should try to ascertain its provenance and authenticity--a matter which the editor, Tyron Braves, examines forthrightly and thoroughly in his extensive introduction. I will attempt to summarize Braves's academically rigorous findings for the layperson.

In the year 1901, with the publication of his ninth novel, The First Men in the Moon, H. G. Wells, then a thirty-five-year-old wunderkind, cemented his reputation as the leading purveyor of "scientific romances." The acclaim accorded to this British upstart, however, did not sit well with the aging lion of the nascent genre, Jules Verne--then an ailing seventy-three and just a few years away from his own death. Verne did not care for Wells's less-stringent approach to scientific speculation, nor for his wilder imagination. In fact, Verne was so perturbed that he gave vent to his famous direct criticism of the novel: “I sent my characters to the moon with gunpowder, a thing one may see every day. Where does M. Wells find his cavorite? Let him show it to me!”

So much is a matter of historical record. But what came next remained secret until just recently.

Both irked and disappointed by the jab from this venerable figure who had done so much to pioneer imaginative literature and whose respect he would have relished, Wells did a daring thing. On a mission both conciliatory and confrontational, he journeyed to France to confront the Master. In Amiens, at 44 Boulevard de Longueville, he was received with a wary hospitality. But after some awkward conversation over a lunch of calvados and choucroute garnie, the two writers found a shared footing in their mutual love of "science fiction," a term they would not even have recognized. And then, impulsively, they decided to seal their tentative new friendship in a manner befitting their shared passion.

They would collaborate on a short novel together.

Over the next two weeks, with Wells as houseguest, the men speedily drafted the book currently under our attention: Flora Columbia: Goddess of a New Age. Ultimately, however, they found themselves dissatisfied with it, and the single copy of the manuscript was stored away in Verne's archives. They parted, not hostilely, but with mutual chagrin at their failure to blend their contradictory approaches to science fiction. Wells returned to England, and the two men had no further contact during the final years of Verne's life.

All this information comes down to us through a contemporaneous account recorded by Michel Verne, Jules's son. And this documentation represents the doubt concerning the novel's provenance.

Black sheep Michel Verne was a known fabricator and hoaxer, always looking to ride the coattails of his famous father. After Jules's death, Michel created several works from scratch, such as The Lighthouse at the End of the World, and promoted them as being authored by his father. His involvement with Flora Columbia, even as mere amanuensis, taints the project.

Tyron Braves subjects the manuscript both to his own expert eye and to computer-aided analysis of the language and style, before coming up with his judgment. The odds, he feels, are approximately three to one that the novel is what Michel Verne represents it to be: the one and only collaboration between these two mighty grandfathers of science fiction.

With this ancillary material out of the way, the reader is free to turn his attention to the novel itself. And what we find--at least in my initially-willing-to-be-won-over-but-balked reading--is a frustrating, somewhat bipolar mess. Wells--long the prototype for the "woke," socially conscious, contrarian and daringly speculative SF writer--comes hard up against Verne--the model for the somewhat stodgy, establishment-loving, engineering-minded and didactic tour guide of the voyages extraordinaires. As one who has read a large share of both authors, I detect that the composition of this novel proceeded in round-robin fashion: each man wrote a chapter, then handed off the result to his partner. There was no attempt to integrate material or blend styles on a sentence-by-sentence level, nor for one man to mimic the other.

The book is set in contemporary America, chosen apparently as a compromise between featuring either France or the UK (or one of their colonies) as a partisan venue.

The tale begins with a contribution from Verne. It is the year 1877, and we witness the birth of an infant girl to a Caucasian man and woman resident in the middle of the Florida Everglades. The man is an engineer working for Hamilton Disston and the state's Internal Improvement Fund on a scheme to drain the Everglades and profit from the reclaimed lands. Alas, when just a few days old the unchristened girl seesher parents consumed by a giant alligator. She is left an orphan and is raised by a tribe of Seminole Indians. In unlikely fashion, they name her Flora Columbia.

Without much by way of transition, chapter two, from Wells, finds Flora a young woman resident in New York City in the year 1901. She has genetically inherited her unknown father's passion for engineering, but disdains tampering with the Everglades since that would displace her adopted tribespeople. There is a very long section where Flora visits Thomas Edison at his home in Fort Meyers and argues with him about the proper role of technology. The rest of the chapter finds Flora playing the role of a "New Woman" in Gilded Age New York society and taking up the suffragist cause. George Bernard Shaw makes a cameo appearance.

Chapter three suddenly introduces the figure of John Jacob Astor IV, famous heir to the Astor fortune, and well-known investor and inventor, as well as being the author of 1894's A Journey in Other Worlds: A Romance of the Future--a book which takes a critical drubbing from the omniscient narrator as if from the pen of a jealous rival. Flora soon convinces Astor to finance a scheme she has apparently been long nurturing: a transatlantic tunnel. This motif is cited by Tyron Braves as partial evidence of Michel Verne's hand in the manuscript, since Michel wrote of such a concept in 1888 in a story entitled Un Express de l'avenir (An Express of the Future). But since the tale appeared afterwards in English in the Strand in 1895, Wells might also have known of it.

Chapter four focuses exclusively on a tempestuous love affair, as Flora comes between Astor and his wife, Ava Lowle Willing. Flora has occasion to repeat many of the arguments for birth control and sex education endorsed by Margaret Sanger, one of Wells's mistresses at the time. Braves finds this motif supportive of Wells's authentic involvement in the manuscript.

Chapter five sees the hiring of the leader of the tunnel project: the nineteen-year-old prodigy Robert H. Goddard. Most of this chapter is devoted to specifications of equipment, materials and cost estimates, including blueprints for a rocket-powered tube sled, as well as details of what kinds of wine and cheeses the commisary will serve the workers.

In the next chapter the project is getting underway when a villain appears! J. P. Morgan, closed-minded capitalist whose International Mercantile Marine Company seeks to dominate shipping, sees the transatlantic tunnel as a rival that will undercut all his profits. A campaign of sabotage and treachery ensues.

We are introduced to the last major characters in chapter six. Onto the scene comes seventeen-year-old Frank Buck, dashing rogue and would-be explorer, accompanied by his forty-six-year-old wife, Amy Leslie, drama critic for the Chicago Daily News. Buck hires on as troubleshooter and enforcer for the project, while Amy is given the task of preparing press releases and a chronicle of the enterprise.

The rest of the novel charts the ups and downs of the wild-eyed scheme, a tumultous saga of engineering triumphs and disasters, romantic assignations and critiques of Western society. The narrative goes entertainingly off the rails entirely in chapters twelve through fifteen, when the underground boring device breaks through into a vast mid-Atlantic cavern system populated by a colony of Selenites! Ultimately--since the book features an odd number of chapters, giving Verne the last word--the tunnel, a hardfought success, does not emerge as planned in Liverpool, but rather inCoquelles, France, exactly where the current-day Chunnel exits. Score another triumph for the predictive powers of Wells, Verne and science fiction in general!

Wells's voice does not go climactically unheard, however, since Flora ends up in a group marriage with Astor, Buck and Amy.

It's a shame that this novel--whatever its origin--is not a more polished and harmonious work, for it could have served as a beacon to light the way to a current detente between the two kinds of SF today that roughly mirror the famous Wells-Verne dichotomy. But such a peacemaking accomplishment might be too much to expect of any mere work of fiction, however visionary. 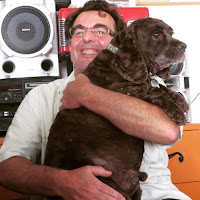 About the author:
website-FB-twitter
Paul Di Filippo sold his first story in 1977. In the forty-plus years since, he's had published forty-plus books: a record he is unsure of continuing into his decrepitude. His latest novel from 2019 is the crime thriller THE DEADLY KISS-OFF. He lives with his partner Deborah Newton, who appeared on the scene a year before that first sale and made them all possible. A native Rhode Islander, he inhabits Lovecraft's Providence, his home about two blocks from the monument marking HPL's birthplace.

WordFire Press is a mid-size new-model publisher founded by New York Times bestselling authors Kevin J. Anderson and Rebecca Moesta. You can find us at wordfirepress.com. Tweet us @WordFirePress. Follow us on Facebook at facebook.com/WordfireIncWordfirePress.