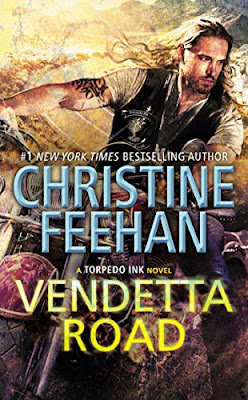 by Christine Feehan
January 28, 2020
464 pages
Publisher: Berkley
#1 New York Times bestselling author Christine Feehan pushes the limits in her next novel in the Torpedo Ink series.
Isaak “Ice” Koval is on a club mission when he sees a woman who stops him dead in his tracks. Soleil is a sweet, sexy, girl-next-door type. She’s an innocent who should be nowhere near the rough-and-ready world of the Torpedo Ink motorcycle club. But Ice knows Soleil belongs with him—and he’ll do whatever it takes to keep her.

After a life of drifting from one thing to the next, Soleil Brodeur is determined to take control of her life. When her breakup with her manipulative fiancé turns ugly, Soleil searches out the stranger who offered her a lifeline and ends up in a Las Vegas biker bar where she meets a gorgeous, dangerous man straight out of her most secret fantasies.

High on adrenaline, she finds herself falling faster than she thought possible. But Soleil knows little about the territory she’s stumbled into, and even less about what it really means to be Ice’s woman.…

Ice is a member of Torpedo Ink, a biker gang that seeks out pedophiles so they can save the kids and kill the pedophiles. All the members of Torpedo Ink are messed up mentally because of how they were raised. This is the first book of this series that I've read and I was a little lost as to what happened to them to make them the way they are until we get a glimpse at Ice's memories or what he and the others endured as children. Let's just say that it was worse than bad.

Soliel got mixed up with Winston who only wanted to marry her for her money. When Soleil overhears Winston's plan to kill her after they're married, she runs right into the arms of Ice. When he finds out what happened to her, he vows to keep her safe but after just a few hours together they end up a lot closer than either of them imagined would happen. I kinda thought the quick way they end up together and push things so fast was completely unbelievable. She's jumps out of a bad relationship and right into one with someone she doesn't even know which I thought was dumb.

Ice and his team go after the pedophiles and when they look into Winston and the people who he works for, they find a correlation between him and the people they are already after. I found this to be another instance where it was such a big coincidence that was too much to be believable.

The guys of Torpedo Ink are rough, rude, crude and dangerous. I would say this is definitely a dark romance. If you're looking for a nice guy, well-mannered men, or guys who will melt your heart...you won't find that here. Yes, Ice falls madly and deeply for Soliel but I had some problems with the way he treated her and problems with the fact that she let him or rather that she didn't mind. He likes it when his friends watch him have sex with her and while she didn't seem to mind, I had a problem with it and it happened frequently. I don't think this is the series for me because there's so much rape, abuse, torture, and murder. I usually really like this author's books but this one just didn't do it for me. I love the writing style, the story flowed effortlessly, the danger was exciting and the story was an engaging one but there was too much murder for me to really enjoy this book. But while I had some problems with parts of this book, I did enjoy the overall story and read it in one day because I wanted to see how this story would end. I think if you like this type of story then you would probably like this series.

Chapter 2
Soleil ran through the lobby, uncaring of turning heads. One didn’t run in a very swank hotel. She wanted to grab security, but Winston had a way of talking that made her look hysterical or childish and him look totally controlled, the adult having to put up with tantrums. She wasn’t about to take chances, not when she knew they planned to kill her.

Who would believe her? Her own fiancé? A lawyer? A policeman? All conspiring to kill her? She would look crazy and Winston would explain she’d lost Bennet, the only one she had as family. He would get sympathy and understanding, and they would all look to him to take care of her. He’d probably sedate her. Did he have a doctor involved too? It was possible. She’d met one through him, one he considered important.

She burst out onto the street, her lungs hurting. Clearly, she needed more exercise if she was going to have to run for her life. Her thoughts were wild and a little hysterical. She couldn’t have that. It would only play into Winston’s hand. She raced to the crosswalk, and fortunately the light changed and there were few people in her way. She was able to cross quickly and get into the relative shelter of the hotel-casino on the next street.

Noise erupted all around her. The concentrated smoke from cigarettes threatened to choke her. For a moment, she paused, a little disoriented. The whiskey she’d drunk was making her feel a lot better. Clearer. She knew exactly what to do. She made her way through the casino with more dignity, not wanting to draw attention to herself.

The casino floor was set up so that the exits were difficult to get to. Every little turn put her in front of card tables, the roulette wheel, craps, or, when she managed to find her way through the maze, machines. A sea of them. They didn’t matter. The drinks had finally steadied her, and she was feeling as if she was in control and could do this.

Still, it was a good distance to the exits and it took her a few minutes to make her way to the other side of the room. The casino was enormous, so much so that she knew she’d probably covered a block at least. She had to have. But she walked with more confidence and less panic. Every now and then, just to be certain, she glanced over her shoulder, or paused at a machine to see if Winston was behind her. So far, her plan had worked. Most likely, he’d gone out onto the strip and worried she’d hailed a cab or taken one of the hotel’s private limos. She was afraid to do that. He could trace a cab and he’d talk any driver into coming back for him.

She thought about getting another drink, but she hadn’t eaten. Already she was much clearer in what she had to do. She felt very courageous. It only took a couple of times going in a small circle before she mastered the maze of machines and was able to push open the door that let her out onto the street. The lights were much dimmer, but still illuminated the sidewalk.

She looked left and right. She was right in the middle of the block. Across the street, neon blue signs flashed, and the sound of music was loud. Each of the bars seemed to be playing a different song, but she loved to dance and the one on the end at the right blared the best music. She headed in that direction and then changed her mind, a little shiver going through her. She knew Winston. He would hire men to find her. He would call the police and report her missing, saying she had a mental disorder and he was worried for her safety. This street was still too close.

She hurried down the block to the next line of bars. The streets seemed darker, and as she came around the corner, a few men standing on the sidewalk in front of a bar looked up, nudging one another. Alarms went off and she paused to get oriented. Just in front of her was another bar blaring dancing music and in front of it were motorcycles, instantly reminding her of Lana. Her heart jumped. Lana. She hurried toward that one without hesitation. If Lana was there, she would know what to do. She was that kind of woman.