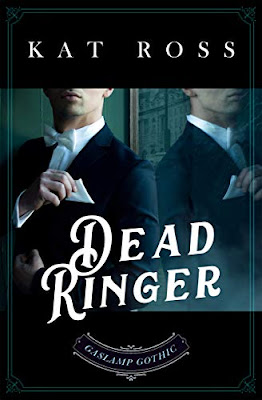 And a client she’d just as soon see dead in a ditch….

Summer 1889. Harrison Fearing Pell hoped for adventure when she signed on with the Society for Psychical Research as an occult investigator. Slogging through New York’s sewers in pursuit of a “mud man” wasn’t exactly what she had in mind. But the reeking monster terrorizing the dance halls of the Tenderloin leads her to an even more peculiar mystery — and the last man on earth Harry wishes to become entangled with.

James Moran is a prodigy in music, mathematics . . . and crime. Harry’s older sister, the famed detective Myrtle Fearing Pell, has vowed to put him behind bars. But Harry owes Moran a personal debt, so when he demands her aid she can hardly refuse. It turns out that the brilliant black sheep of New York Society is part of a secret club at Columbia College whose members have started dying in bizarre ways that may not be accidents.

Thus begins one of the strangest cases of Harry’s career, a tale of murder, cold-blooded revenge and fairytale bogeymen to make the Brothers Grimm shudder. As the bodies pile up, each preceded by sightings of the victim’s doppelgänger, Harry and her stalwart friend John Weston must race against time to save a man who arguably deserves his macabre fate.

Kat Ross’s Gaslamp Gothic is an outstanding series not to be missed. If you haven’t read previous installments, by all means, drop everything and commence reading. Dead Ringer is the outstanding fifth installment, but to start here would be doing yourself a grave disservice.

The series follows a cast of inquisitive female main characters looking to reconcile reality and the supernatural. Harrison “Harry” Fearing Pell resumes the spotlight in Dead Ringer along with her faithful friend and sleuthing partner John Weston. Harry and John have been asked to locate and dispatch a mysterious “mud man” lurking in sewers of New York City terrorizing citizens and tourists alike. The pair soon discover their fabled foe is part of a larger, more sinister, web.

In book five, readers finally get a deeper dive into the enigmatic James Moran. Moran has been an unsettling, albeit intriguing, feature in previous books. And while I’m not sure I know him better having read Dead Ringer, I’m definitely more invested in his character and the sphere of Harrison Fearing Pell. I’m also certain of one thing: I want more Moran.

I’ve said it before, particularly in my 2019 “best discoveries” post; Ross is a formidable storyteller. I’ve savoured every word of every book in this series. Gaslamp Gothic is witty, smart, and a little sexy. Dead Ringer is an excellent addition to this collection.
Jeanie G
Getting 4 “mirrored” sheep

I am not sure how I have totally missed this author’s works. New for me but now added as a go-to for further publishings if this writing is any indication of her other books.

Starting with the 5th installment of her Gaslight Gothic series might have put me at a slight disadvantage in the beginning but it didn’t take me long to enjoy the main characters’ (Harry and John) relationship and the “villain” Mr. Moran. I didn’t feel overwhelmed with the setting of early 1900s in the brogue or “stereotypes”. Most of the time I forgot the time period all together.

The mixture of mystery, paranormal, danger, and underlying attraction fit well in this tale. I did have to backtrack a couple times to make sure I had the storyline correct but I didn’t have a problem with making sure I read thru to the last page! I thought the doppelgänger an interesting mystery plot.

I know I will be going back to pick up the first 4 books to find out a little more background on Harry.

About the Author:
Website-FB-Twitter
Goodreads
Newsletter
Kat Ross worked as a journalist at the United Nations for ten years before happily falling back into what she likes best: making stuff up. She’s the author of the Fourth Element and Fourth Talisman fantasy series, the Gaslamp Gothic paranormal mysteries, and the dystopian thriller Some Fine Day. She loves myths, monsters and doomsday scenarios. Check out Kat’s Pinterest page for the people, places and things that inspire her books.