Excerpt: To Weave a Highland Tapestry by Mary Morgan + giveaway

Inspiration for a Series by Mary Morgan

As a writer, I can be inspired by anything—from a song, an old photograph, or watching a weaver work on her loom. My new release was a yearning to return home to the Dragon Knights of Scotland and include a very special tapestry.

Yet before I give you a glimpse into the background for To Weave a Highland Tapestry, I must take you back almost two decades…

The Order of the Dragon Knights was created in the Highlands of Scotland on a cool summer evening of June 2000. Sitting alone on a large boulder, I was surrounded by the magic and mists of the land, including a few bleating sheep. The Dragon Knights were born that evening. The awakening and sense of a story overwhelmed me, and I can recall vividly these men and some of their tales. I wove my fascination with Celtic mythology, which began years before my first trip, into these epic stories of men who were part Scottish and Fae.

Now my love affair with Scotland began many decades ago. I blame it on my own bloodline—a yearning to return to the land of my ancestors. I have visited Scotland three times, so I’ve put into my stories what I’ve seen, felt, and experienced. I took a travel journal and wrote daily, which helps in my research, too. In addition, my husband took many wonderful pictures that captured the majestic scenery of Scotland.

In To Weave a Highland Tapestry, I felt it was time to give the hero, Patrick MacFhearguis his own “happy ever after.” He’s been a huge secondary character since my first book and series, Dragon Knight’s Sword, Order of the Dragon Knights. I sensed he was brooding at his home in Scotland. What he needed was a wife and a purpose. In truth, he has been a favorite of mine since he stepped into the first story. I made his castle, Leòmhann, as the center of this love story, along with an ancient yew tree.

Five stories later, a second spin-off series (Legends of the Fenian Warriors, four books), and three Highland holiday romances (A Tale of the Order of the Dragon Knights), I’m sure the Dragon Knights will have more stories to be told. The spark of inspiration took off with this first series and gave birth to other ones, too. 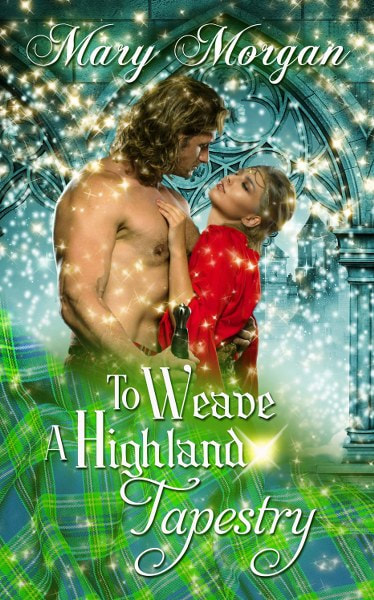 To Weave a Highland Tapestry (A Tale from the Order of the Dragon Knights)
by Mary Morgan
December 9, 2019
Genre: Time Travel/Scottish Medieval/Paranormal Romance
Publisher: The Wild Rose Press, Inc
Patrick MacFhearguis, hardened by battles won and lost, desires what he can never have—peace within his heart and soul. Yet, the ever-meddling Fae weave a new journey for him to conquer—a task this Highlander is determined to resist.

When skilled weaver, Gwen Hywel, is commissioned to create a tapestry for the MacFhearguis clan she embraces the assignment. While seeking out ideas, she finds herself clutching the one thread that can alter the tapestry of her heart and life.

A man conflicted by past deeds. A woman with no family of her own. Is it possible for love to unravel an ancient past in order to claim two badly scarred hearts? Or will the light of hope be doused forever?


Excerpt
His eyes smoldered like fire. “Will ye heal me with a kiss?”

Slowly, he brought her fingers to his lips, kissing each one. “I have told ye my name. What more do ye wish to ken?”

Gwen chuckled low. “I don’t even know your surname.”

Bringing her wrist to his mouth, he nipped along the vein, sending shards of pleasure up her arm and down her back. “MacFhearguis. Patrick MacFhearguis.”

Gwen swore her heart stopped beating. Lights danced in a tempest around her. “No,” she whispered.

This time, Gwen yanked with all her might and was rewarded when he released his hold on her. All the pieces of her jumbled puzzle of insanity slipped into place with clarity. Her mind screamed at the impossibility. She refused to submit to the conclusion. He must be a different Patrick MacFhearguis. However, the further she fought the realization, the more everything became crystal clear.

She fought to steady her nerves and clutched her hands to her chest. “What is the year?”

“The year!” she demanded, pounding her fist into the palm of her hand.

A flicker of uncertainty reflected in his eyes. “Twelve hundred and nine.”

Hysterical laughter bubbled up inside her, and she squashed its release immediately. “How in the hell did I end up here?”

About the Author:
Website-FB-Twitter
Instagram-Pinterest-Bookbub
Amazon-Goodreads-LinkedIn
Award-winning Celtic paranormal and fantasy romance author, Mary Morgan, resides in Northern California with her own knight in shining armor. However, during her travels to Scotland, England, and Ireland, she left a part of her soul in one of these countries and vows to return.

Mary's passion for books started at an early age along with an overactive imagination. Inspired by her love for history and ancient Celtic mythology, her tales are filled with powerful warriors, brave women, magic, and romance. It wasn't until the closure of Borders Books where Mary worked that she found her true calling by writing romance. Now, the worlds she created in her mind are coming to life within her stories.


If you enjoy history, tortured heroes, and a wee bit of magic, then time-travel within the pages of her books.