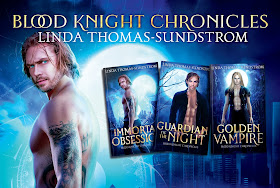 Hi Sheepsters. Glad to be here again with a new post in celebration of my new release just this week – GUARDIAN OF THE NIGHT.


“She was breathless, as if each word she spoke was hard-won. Her eyes were bloodshot and open wide. More fascinating for him than those eyes, or the way her chest rose and fell beneath the blanket covering her, was the way he could trace the path his blood was taking inside her. The droplet had already threaded through the chambers of her heart.”

Guardian of the Night is the third book in my sexy, race-paced Blood Knight Chronicles series, which was started at Nocturne, and continues with new birthdays from GothicScapes.

In a paranormal story, it’s what we crave.

What's so freaking cool about the romance in it?

What is it about a paranormal or fantasy story that turns you on, as a reader?

I have my own ideas, of course. The first one revolves around the phrase "Forbidden fruit." The "guys" we, as good girls, aren't supposed to give the time of day to, yet curl up with at night with when the lights are low, and we have time to indulge in our bookish fantasies. You know what I mean. “Others.”

Guys that can tantalize us with their eyes, have bodies to die for, and underneath it all… have traits we somehow can relate to, even if we aren’t “Other.”

This is all about seduction, really. Right? A slow build of literary foreplay carries readers through the book as a lead-up to a great and satisfying culmination of two souls finally merging. The way a vampire seduces. The process of a good alpha-Were seduction. Dangerous, sure, but oh-so-sensual. So hot and so very special if it’s drawn out and done well.

Here, foreplay means the sighting, the chase, the intimate and immediate knowledge of another being “the one,” and then having to convince another character of it through actions, plot, dialogue, and sexual tension.

In The Blood Knight Chronicles series…. About seven knights from the time of the Round Table who turn up in our century after living from then to now, and that are still honoring their vows and their quest… 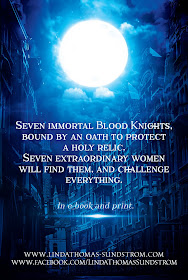 In this book, Guardian of the Night, we now meet French recluse Mason LanVal, one of those original seven knights, who fights vampires and others who bother the area, while still protecting a holy relic… The Holy Grail… for reasons which will be made clear. Dangerous reasons. Imperative reasons that make him the middle ground between mortal and immortal souls.

And then American surgeon Faith James shows up in his forest, looking for her missing sister, and asking for his help. Because she’s seriously injured in chapter one, he is driven to help her. We wouldn’t love him if he didn’t.

Guess what happens after that?

A lot of sexiness and heat that both attracts Mason and Faith to each other, and also repels them. They are of different species, after all. (More on this in chapter two).

Racing pulses. Fast-paced action and suspense. Two souls meeting that can have no part of each other, according to the world. A handsome immortal with honorable principles. A feisty female who won’t let him get away with silence, and needs his help to find her sister. Trouble. Incredible danger. Immortals, vampires, and werewolves in a French forest.

This is Guardian of the Night.

I hope you will check it out, and the other two Blood Knight Chronicles books as well. They are Golden Vampire and Immortal Obsession. 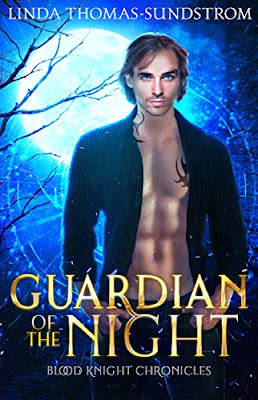 by Linda Thomas-Sundstrom
January 10, 2020
247 pages
Publisher: GothicScapes
An all-consuming desire that is forbidden to indulge, but impossible to ignore....

The Guardian. An immortal with incredible strength, created centuries ago to protect a holy relic and ensure the purity of an immortal bloodline by fighting those who would abuse its power.

As one of the seven Blood Knights, Mason LanVal spent lifetimes honoring his vows without wavering. That all changed the night he found American Faith James, in France to find her missing sister.

Two souls on separate personal missions converge paths in a dark, dangerous forest... and inherent genetic traits can either bring them together or drive them apart.

About the Authors:
website-FB-Goodreads
Amazon-BookBub
Newsletter
Linda Thomas-Sundstrom is the author of paranormal romance and urban fantasy novels and novellas, both dark and light, for HarperCollins/Harlequin Nocturne and GothicScapes, with more than 30 stories that trespass into the supernatural realm.

Linda is the author of contemporary, paranormal romance, and urban fantasy books for Kensington, Amazon Montlake, GothicScapes, Harlequin Nocturne, and Harlequin Desire. She currently has 30 stories that trespass into the supernatural realm, with ton of ideas for more.