Sometimes you run into a cover or series of covers that make you stop, bow down to the awesome, and maybe drool and develop grabby-hands.

Today, I give you the Winged Warriors Trilogy
by African American Paranormal Romance by USA Today Bestselling Author N.D. Jones

Talk about an explosion of colors! Love the composition of these covers. The way the wings are part of the background. Very ethereal and powerful. I also like that this is a trilogy and the titles are three words. 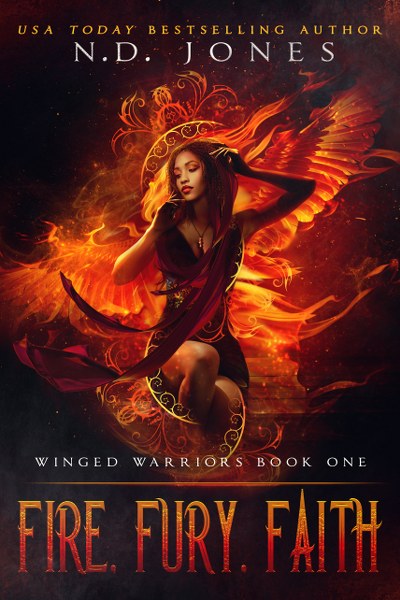 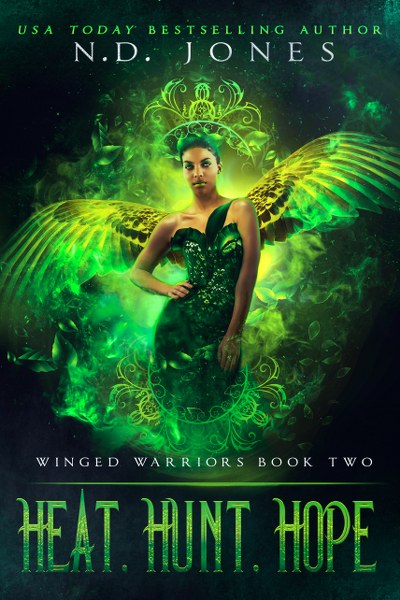 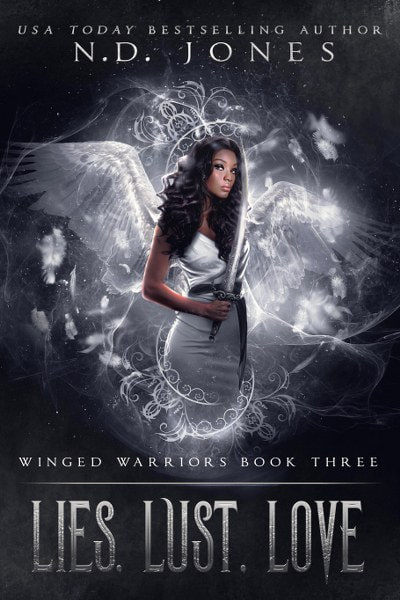 They have earned my Grabby-hands stamp of approval 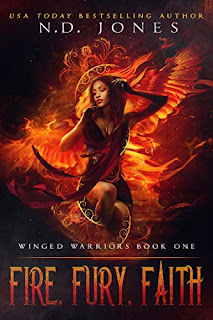 by N.D. Jones
April 24, 2020
96 pages
Issa, tribal chieftain and warrior, dies trying to protect his family and tribesmen from slave traders but is given a second chance at life as an angel. Having lost his home, daughters, and life by forces beyond his control, Issa, a Guardian Angel for four centuries, has yet to come to terms with this "failure." So when a rogue demon attacks and almost kills his wife, Serwa, Issa goes on the hunt.

Serwa knows the pain of loss, the burn of fire, the heat of love. She is a Healer Angel, bound to help, to heal, to protect. And the person she wants most to heal is Issa, her husband, her soul mate, her warrior. But what is a woman to do when a husband's guilt and fury challenge the very foundation of their marriage?

"I found this book to be a steamy and intense story about angels going through the end of time." Amazon Audible Review

Fire, Fury, Faith Excerpt
Grateful for the quelling blackness of the night and the glowing full moon, Serwa slipped away from the village. The melodic drums, tapping feet and clapping hands, boisterous laughter, and good cheer made her escape a surprisingly easy task.

Following the jagged line of the unimpressive, solemn lake that served as a natural and fragile border between the two warring villages, Serwa glanced behind her, the burning torches from the village enclosure growing dimmer the deeper she sank into the woods.

She turned away. There was no one tracking her, or at least no one she could see or hear. Serwa couldn’t be certain her absence hadn’t gone unnoticed. Would he send one of his guards after her? She darted another furtive glance around, nervous, brown eyes slowly searching the shadows for movement. Nothing. But he would send someone for her, she thought. The grim possibility of being dragged back against her will chilled Serwa. An unwelcome coat of cold sweat trickled from tense nape to resolute shoulders. She quickened her pace, bare feet hitting the ground with determined strides.

She broke into a sprint. Long, toned legs used to the exertion propelled her forward, the freedom awaiting her on the other side of the lake an incalculable motivator. So Serwa ran. A hint of cool mist danced down from the swaying overhanging trees, their branches rich and heavy with vibrant leaves meant to tempt. But she refused to be enticed by the intoxicating aroma or the sinfully beautiful sight of the Wawa Aba Forest in full, bountiful bloom. No, she had to get to the other side before they came for her.

Pushing the tide of black hair away from her sticky brow, Serwa slowed, hid behind a towering baobab tree, and peered across the river. The village she spied was farther in the distance, but all was quiet save for the hypnotic chirping of— Two strong hands caught her unawares, one going to her waist, the other across her mouth, effectively silencing the scream that threatened, forcing a compressed, trembling swallow.

Serwa’s heart sank to her soles, her short-lived escape plan dying with each step her captor took. He carried her deeper into the forest. The sparkle from the moon glistened off the water, a mocking reminder that an even an unimpressive river could be a prison.

While the urge to fight and flail about welled inside, she squashed the impulse, knowing she could harm no one, even if it meant sacrificing her freedom, her very beating heart. Instead, Serwa relaxed into the powerful hold, accepting her fate, already calculating her next escape plan. For there would be another, and if need be another, and another still until she was free. There was, after all, more than one mode of fighting. Blood and death weren’t the only options, just the ones men often prized, spear and shield their default.

So she closed her eyes and permitted her body to release the tension that had built into a cataclysmic fright the moment she was grabbed. Then a rush of awareness washed over her, causing Serwa’s heart to race. Her dashed hopes of only a moment ago frantically pulled itself from her feet, up her shivering thighs, settled in her lower belly, then exploded through Serwa’s suddenly moist sex.

That smell. Myrrh. Musk. Him.

That touch. Trained. Tender. Him.

That taste. Sweaty. Sensual. Him.

His low, deep voice drifted in her ear, warm honey to her senses. “Everyone is drunk on the winter solstice. They’ll be celebrating until the sun finally rises after a long day of rejuvenating slumber.”

He released her, and Serwa turned to face her captor. Issa, the eldest son of the chieftain of the village across the river, was indeed her captor. For he’d captured her heart six months ago, claimed it as his own, locking the delicate organ away for all time. It was Serwa’s finest surrender, Issa’s noblest victory.

That sight. Dignified. Dangerous. Hers.

Website-FB-Twitter
Instagram-Amazon
Goodreads
N. D. Jones, Ed.D. is a USA Today bestselling author who lives in Maryland with her husband and two children. In her desire to see more novels with positive, sexy, and three-dimensional African American characters as soul mates, friends, and lovers, she took on that challenge herself. Along with the fantasy romance series Forever Yours, and a contemporary romance trilogy, The Styles of Love, she has authored three paranormal romance series: Winged Warriors, Death and Destiny, and Dragon Shifter Romance.

She writes what she sees as a dearth in the romance genre--African/African American love with a paranormal twist. She spends a lot of time developing the mythology of her novels, as well as the execution of the paranormal element. When she writes a book with witches and shapeshifters, for example, she thinks it's important to show what it means to be a witch and shapeshifter. That's one thing a reader of books by N.D. can look forward to. The paranormal is not a sidebar in her novels. It's center stage and critical to the plot.

GIVEAWAY
2 $10 Amazon Kindle Gift cards; 2 copies of original concept art for Fire, Fury, Faith (8x10 glossy photos, one per winner. Winners can choose from one of two options. Both photos are sold at my Etsy shop, as well as on my author website. The photo prizes are US only for mailing.