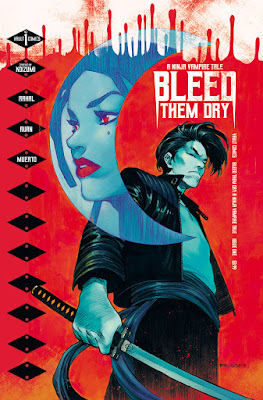 Vault Comics
The year is 3333. Earth is in a state of recovery. Vampires are real, and though far less populous, they thrive alongside humans in the Japanese engineered mega city known as Asylum. People have come to understand that some Immortals are good, some are bad, and most navigate the world without incident. There is peace. That is, until now. Someone is brutally murdering vampires. And Detective Harper Halloway has been assigned to the case. To solve it, she'll have to unearth a much deeper truth: the future of humanity has been edited.

I'm a big urban fantasy fan and I love a good vampire story; give it a dark edge and I'm all in...turn it into a graphic novel...and move out of my way! Add a ninja? Mwahaha!
So I was thrilled to check out Bleed Them Dry #1 from Vault Comics. And I was NOT disappointed. 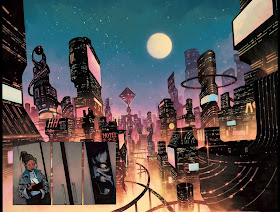 The story is well told and grabs you from the beginning and yanks you into this futuristic world.

Detective Harper Halloway is my kind of woman protagonist. Just the right amount of vulnerable vs badass and not over the top. It doesn't hurt her partner is a sexy white-haired vampire...who doesn't love a little eye candy? Anyway, the story moves along at a fast pace with a WTF?-twist and big-box-office-movie-style ending that has me craving for the next part.

This was me at "that" part

Great clean artwork and interesting panel composition. And one of the coolest presentations of death by sword I've seen. 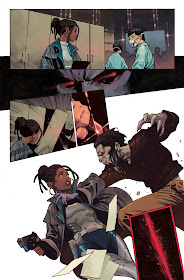 Bleed them Dry is everything I look for in an urban fantasy graphic novel... it would make a great movie or TV series...just saying...

Put Vault Comics on your radar, Bleed Them Dry #1 is a winner and I'm betting they have more!

If you've never read a Vault Comic you can try out 13 different first issues for free on their site!
https://vaultcomics.com/free-firsts/ 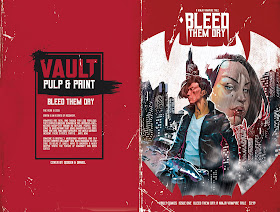 Inside the Vault, it's safe to be different.