Todd Sullivan - Writer vs Author: A Matter of Semantics + giveaway 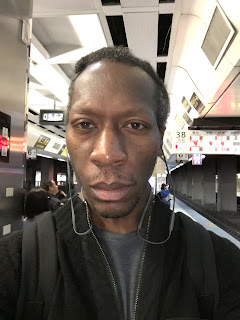 Todd Sullivan talks about being a writer vs an author.
Then check out Todd Sullivan's two novella series: The Windshine Chronicles and the Vampire Series of Extreme Horror. And enter for a chance to win print copies of all four novellas!

A Matter of Semantics

I’m big on labels. I think words should fit snugly into the shape of their meaning. These days, I’ve been referred to by two titles: writer and author. Are they both the same? And ultimately, which one am I?

Everyone literate can write, but does that make everyone who writes a writer? I think many people would reject giving that label to anyone who can simply pen a language’s words in ink. I know Korean, and can fill a blank page with it, so does that make me a writer of Korean? If not, then what is a writer? Perhaps one who devotes a certain amount of time in their finite lives to chasing the perfect crafting of prose and poetry?

Piggybacking off that, is everyone who spends enough time writing, an author? Or perhaps is it anyone who writes, and then puts their writing on the market for sale? Does then the selling of one’s books for profit make a person an author?

One label that hasn’t been affixed to me by others is artist. Are writers and authors, artists? Artists live in pursuit of beauty, even if the subject is ugly. They search for truth amongst the lies we cloak around society. They seek to create that which transcends time, culture, race, gender, and socioeconomic status.

Labels are important to me because I believe every word has its own unique identity. Though they can share similarities, I do believe there is an ideal meaning for each word. When I construct a sentence, I try to find the absolute best way to craft the line to create maximum effect. So if I were to pen the sentence, ‘The __________, Todd Sullivan, sat before his computer.’, which would be the optimum way to fill in the blank: writer, author, or artist?

At the beginning of a podcast guest spot I did months ago, the host introduced me as, “The author, Todd Sullivan.” I corrected her with, “Well, writer.” Without missing a beat, she said, “Yes, author.” I let it go, and haven’t mentioned it in any podcast since. Being called an author does me no harm, but making an issue out of it wastes time and starts off the encounter disagreeably. But I don’t label myself as an author in my own mind. In the end, I think author is something that happens after a certain mastery of prose-craft has been achieved, a certain number of books has been published, a certain number of sales has accrued, a certain number of awards has been received, and a certain level of notoriety has been attained. Coupled with all of these factors, for great authors, is longevity; discovering a novel form of expression; and the magnitude of social impact of your writing.

And what of an artist, which has less to do with output (though output is essential) and more to do with lifestyle. Being an artist is a way of living, perceiving, and interacting with the world through a creative lens. A writer-artist doesn’t observe people, they see characters. They don’t wander through events, they walk through plots. They don’t listen to speech, they hear dialog. They don’t think good and evil, but protagonist and antagonist.

I know how much time I’ve dedicated to the written word, starting in kindergarten up until the present. Most of my month every year since childhood is spent on writing and thinking about prose, so I feel comfortable calling myself a writer. And if reality was the matrix, I wouldn’t conceive it as a steady flow of numbers, but a storm of alphabets. In my eyes, life is a page filled with words.

One day I may feel confident in calling myself an author, but that will probably be much later, when the novel of Todd Sullivan is on its last chapter, and in the distance two words loom. 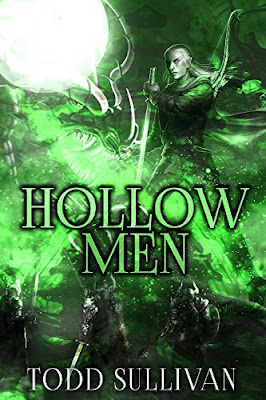 Hollow Men (The Windshine Chronicles Book 1)
by Todd Sullivan
December 9, 2019
138 pages
Men from South Hanguk undertake quests to gain social standing, to stand above their peers, to make names for themselves.

Ha Jun, sixteen years old, possesses a glyph sword crafted in foreign lands. Alongside a soldier, a knight, and a monk, he travels across the country to destroy a demon lurking beyond the running trees of Naganeupseong Fortress. Accompanying them is the dark elf, Windshine, who emigrated to South Hanguk from her own war-torn country centuries ago.

Distrusted by the people of South Hanguk, Windshine has the Emperor’s protection and is tasked with recording the valiant acts of quest groups battling creatures born from nightmares.

Ha Jun becomes drawn to Windshine as they near Naganeupseong Fortress, but when he discovers the blood connection between the demon and the dark elf, he will either succumb to his fear, or rise up and become a hero. 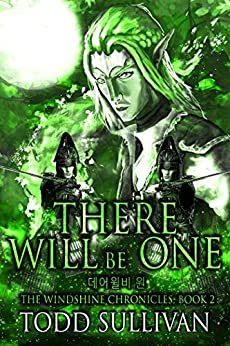 There Will Be One: The Windshine Chronicles, Book 2
by Todd Sullivan
May 1, 2020
112 pages
Genre: dark fantasy, horror
Publisher: Mocha Memoirs Press, LLC; 1 edition
For generations, Windshine has chronicled the exploits of young men on quests to become heroes. Most suffered brutal deaths, and distrust of the Dark Elf grew until rogue officials offer sixteen-year-old archer, Woo Jin, the chance to eliminate her. If he succeeds, they will name him hero. If he fails, he can never return home.

In the company of musicians, veterans, and the wielder of the glyph blade, Woo Jin sails from Jeju to the mainland. Their quest— to evacuate Goseong, the village of children, from the devastated borderlands of South and North Hanguk. Unbeknownst to Woo Jin’s companions, he studies Windshine for weaknesses even as he wonders what evil lurks in the Dark Elf.

Reaching the village, the companions encounter a fierce horde of northern soldiers. Battling to survive, Woo Jin spots the perfect opportunity to fulfill his mission, but will he assassinate the Dark Elf to become a hero?
The Vampire Series of Extreme Horror 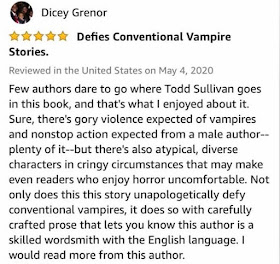 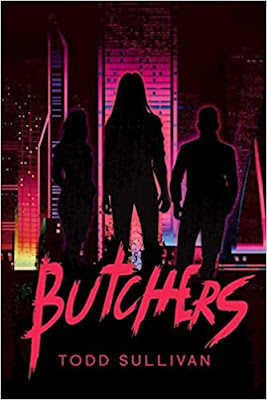 Butchers (Vampire Series of Extreme Horror)
by Todd Sullivan
November 21, 2019
Genre: horror, vampire
111 pages
Publisher: Nightmare Press
Kidnapped, turned, and locked away in a concrete basement, high school student Sey-Mi is taught the ways of the damned. Her captors, beautiful and malignant, cruel and insane, torture her until she pledges allegiance to the Gwanlyo, a secret organization of vampires now obsessed with bringing her into their ranks. Enter Cheol Yu and Hyeri, rogue members who want to liberate vampires and set them upon humankind like a plague. Their first act of rebellion is to persuade Sey-Mi to join them in their twisted objective of unraveling this draconian society of the dead. Before they can do that, they will have to dodge the Natural Police, an order within the Gwanlyo whose objective is to hunt down and butcher any vampires that break the organization’s strict rules, and who are currently tracking Cheol Yu for murdering one of their own. Hyeri, who is no stranger to the organization’s wicked methods of agonizing punishment, is hell-bent on bringing them down, and is prepared to lead Cheol Yu through the dark, abandoned streets of the Gwanlyo’s compound where Sey-Mi is being held captive. She doesn’t intend to go in unarmed, however. Hyeri has a plan – one that might just burn the Gwanlyo to the ground. Will Sey-Mi place her loyalties in the Gwanlyo that rules through terror? Will she side with rebellious conspirators who strive to bring hell to the world? Or will she carve out her own path through the flesh and bone of anyone who stands in her way? Find out in Butchers, a novella of extreme horror. 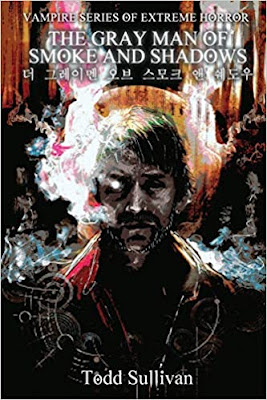 The Gray Man of Smoke and Shadows (Vampire Series of Extreme Horror)
by Todd Sullivan
May 24, 2020
141 pages
Genre: horror, vampire
Publisher: Nightmare Press
As a child, Hyeri’s uncle tortured her. Years after escaping his brutal touch, she discovers a secret organization of vampires and joins the ranks of the undead. Gaining supernatural strength and speed, she seeks one thing: revenge. When Hyeri unleashes her decades-old hatred upon her uncle, she’s interrupted by a vampire enforcer who seeks to apprehend her for breaking company protocol and revealing her vampiric nature to mortals. Hyeri fends off the assassin, but an errant attack wounds her uncle, and the vampires glimpse an evil that has taken refuge inside of him. The darkness desires to remain unknown and plots to silence them both. Forced to combine their abilities, the vampire duo sharpen their swords and gorge on blood to increase their strength. Can they withstand the onslaught of Hyeri’s uncle, The Gray Man of Smoke and Shadows? Before they can find out, someone else stumbles onto their path. Someone with abilities they have never seen. This strange being, full of rage and vengeance, is hell-bent on destruction. But who will be his target? Find out in Volume II of the Vampire Series of Extreme Horror based in South Korea.

About the Author:
FB-twitter
Todd Sullivan attended his first serious writing class in 1995 at Stanford University. Between 1997 and 2002, he participated in the National Book Foundation's 10 day summer writing retreats. In 2006, he graduated with a Bachelors in English with Concentrations in Creative Writing from Georgia State University. He moved to New York that same year, and received a Masters of Fine Arts from Queens College in Flushing, New York in 2009. Todd moved to Jeju, South Korea, where he taught English in the public school system for five years. He currently lives in Seoul, and is studying the Korean language at Yonsei University. He is also working on a speculative fiction/urban horror novel that takes place in Korea.

GIVEAWAY
I currently have two novella series, each with Book 1 and Book 2 available. I would be happy to send a single winner all four novellas, mailed through Amazon.