Undying Witch A Dysfunctional Family of Witches Prequel by B. Austin + giveaway 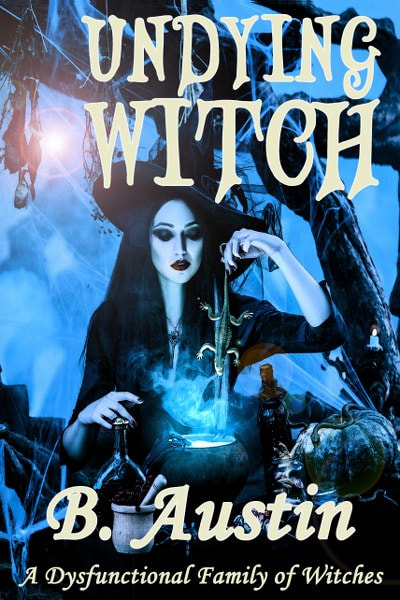 by B. Austin
October 1, 2019
Genre: Dark Fantasy
"I will live forever. If I could make you, my daughter, live longer than a human, I would. I do not want to be alone again."

A 97-YEAR-OLD FORTUNE-TELLER DISCOVERS THE MAGIC TO BE YOUNG AND LIVE FOREVER.

DIMA seems doomed to live a life of poverty until she steals the Starostavne Books of Magical Spells and Enchantments. Monks wrote the wizardry books centuries ago. In the Tree of Life Magic and Time Spells book, Dima learns the secret of never aging.

Years later, Dima's teenage daughter resents a mother who is 112 years old but shifts into a woman young enough to be her sister. MEDEA loathes a mother who loves her 17 cats more than she does her daughter. Medea despises a mother who claims all witchcraft as her magic and treats her daughter like a slave. In secret, Medea develops her own sorcery.

PLEASE NOTE: This is a standalone book in this series and does not have to be read first or in any other particular order.


Excerpt
Ninety-eight-year-old Dima clutched the rock, spinning like a young woman. She would die remembering herself dancing in St. Petersburg Square.

She closed her eyes, clenching the volcanic rock, feeling the stone shudder beneath her touch.

She saw herself once more, with lush hair brushing her ankles. On a warm day, she would dance naked in the allies, her hair covering her breasts like Lady Godiva. She would twirl, slapping the men’s faces with her golden locks and driving them wild. “Those were the good days.”

Dima would die singing. She sang out loud the song Those Were the Days composed by Boris Fomin. The song was about remembered youth and romantic ideals.

She was getting dizzy and feared falling. She did not want to die in pain with broken bones.

Dima stopped spinning. What the…? How could this…be?

Are these my hands, smooth and young with no wrinkles?

Her legs were smooth, shapely, and tall.

Her back was straight and her breasts…ooh-la-la, could she attract the men with these twin firm beauties!

There was no sagging under her arms.

She shoved her hands under her buttocks and squeezed. Her Butt was hard as a rock.

She patted a hand under her chin which was no longer almost touching her chest but was firm.

Dima ran out of the House of the Tragic Poet with the volcanic rock, no make that shape-shifting rock, clutched in her hand. The ruins were especially eerie because the site closed at five o'clock. All the tourists were gone. 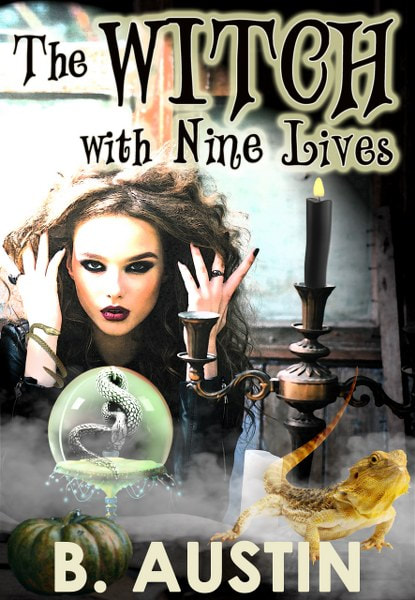 The Witch With Nine Lives (A Dysfunctional Family of Witches Book 1)
by B. Austin

August 27, 2020
MEDEA TURNS INTO A CAT AT NIGHT, due to her mother's curse. In Undying Witch, DIMA found a shapeshifting stone. She is 130-years-old but appears to be 18, the same age as her two daughters. Medea works in the family witchcraft business of fortune-telling, seances, and other witchery-for-hire. NIKKI works as a maid. Medea is tortured by a secret that can destroy the sisterly tie between her and Nikki. Her sister was born a Marilyn-Monroe lookalike. Despite her beauty, jealousy eats away at Nikki because her mother and sister have magic. Nor is Nikki allowed near the books of spells, enchantments, and potions Dima stole from Russian monks. Unknown to her family, Nikki, is developing a magical gift which she cannot control, a sorcery that will threaten Medea and pit two powerful sisters against each other.

(Please note: This is a standalone series. The books can be read in any order.) 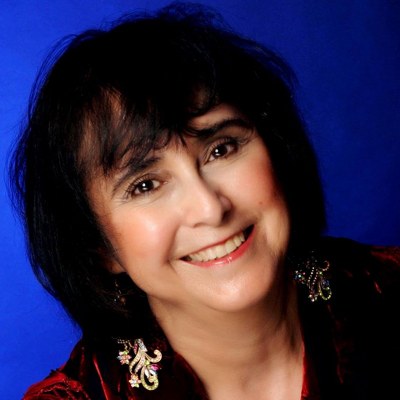 Before writing fiction full time, B. Austin was a Computer Programmer, Web Developer, and Software Engineer. She has a Bachelor's Degree in Applied Mathematics. If you are still curious about Belinda, she has written a series of memoirs entitled: MEMOIRS OF A BIGAMIST'S DAUGHTER. She thanks you humbly for your interest.

In her own words: "I would like to have a dinner party on Halloween with all my fans, and Edgar Allan Poe as guest of honor. I fell in love with his writing when I was a kid. We will have chocolate cake, chocolate-covered strawberries, and fudge for dessert. With bated breath, we will ask Eddie the real story of how he died. Everyone loves a good horror tale."