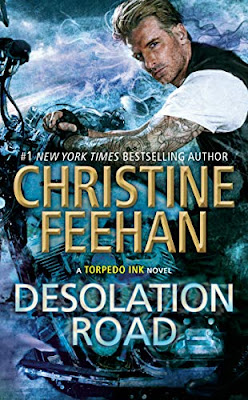 by Christine Feehan
July 7, 2020
Berkley
Take the ride of your life with the Torpedo Ink motorcycle club in this thrilling romance novel from #1 New York Times bestselling author Christine Feehan.

Torpedo Ink is Aleksei “Absinthe” Solokov’s whole life. They’re his brothers, his family—his everything. But that doesn't stop him from wanting something that only belongs to him. That’s why the tough biker has spent the last six weeks at the library, reading every book he can get his hands on and watching the prim and proper librarian who makes his blood rush.

For the past six weeks, Scarlet Foley has been fantasizing about the handsome, tattooed man whose eyes follow her every move. She senses he's dangerous. She wants him to get close enough to touch. She wishes she could let him know the real woman, not the one she pretends to be. But Scarlet has a plan to carry out, and she can’t afford any distractions.

Absinthe is well aware that Scarlet is hiding something. She’s a puzzle he intends to solve, piece by intoxicating piece….

Aleksei (Absinthe) loved books, it gave him a way to escape for a little while and feel normal. But coming to the library for the past six weeks had more to do with the librarian than the books. He had been watching her and hadn't told anyone about her yet. He could command with his voice if he wanted to and he wanted to tell everyone to be quiet and stop thinking for a while so he wasn't always bombarded with emotions, but he didn't.

Scarlet Foley, the librarian was thrilled when Aleksei kept coming back to the library. She thought he was the most gorgeous man she's ever laid eyes on. She hadn't been enamored with muscles and tattoos until she met him and now she had a hard time not staring at him. But she has a huge secret so she's very careful about who she spends her time with.

Aleksei could read thoughts from those he touched but he also had other gifts. He could compel the truth and make suggestions others would follow. He's a member of Torpedo Ink, a biker gang that was trained from a young age and now seeks out pedophiles so they can save the child victims and kill the offenders. Unfortunately, all of the members are a little messed up mentally because of how they were raised and the abuse, torture, and hell they went through as children.

When Aleksei asks her out on a date, she was wary at first but she accepts and finds out that they have a lot in common including the fact that they are both speed readers. I loved that since I've been told that I read pretty fast and could relate to that fact really well. I found them to be fun, genuine, and even a little flirty. But when his club does a deep background check on her, he finds out that she's more like him than he could have ever imagined. All he knows is that Scarlet might be in danger from a very powerful man who wants vengeance and even though she can take care of herself, he wants to be there to make sure she's safe...if she'll let him.

Their relationship gets serious really fast when they're thrown into a dangerous situation and Absinthe's club gets involved in helping to keep her safe not only from the man who wants revenge against her but a rival motorcycle club who has been hired to kidnap her and bring her to the person who put a hit out on her.

I have so many mixed feelings for some of these characters. Absinthe's brothers and sisters of his club have very strong personalities and even though they care deeply about each other and the person that will become their husband/wife, they are still really messed up people. They all seem to have peculiar or even strange and sometimes dangerous sexual 'needs' that they expect their partners to be ok with. So while I liked this book much better than the first, there are still things about these people that I don't like. I'm almost scared to guess what will happen when Savage gets his book because that character is probably the most messed up and he's more than a little scary. I pity the woman that catches his eye but I'm also intrigued. Like I said, so many mixed feelings.

I liked this book a lot more than the first book. The guys of Torpedo Ink were rude, crude, and very much cavemen in the first book. But Absinthe is a more likable character and the other guys have settled down a little bit. They might still be unpolished gems but they seem to be better people since finding their partners. The women's calming personalities seem to be rubbing off on these guys. But they all genuinely care about each other which is admirable and something that I really like.

I give this book 4 sheep.


Excerpt:
Absinthe opened the door to the restaurant for her, scanning the room quickly for potential trouble before allowing her to do the same thing while he turned back toward the street and gave that another quick once-over. Certain no one was paying attention to either of them, he closed the door and followed his librarian’s amazing ass. She was in a black skirt with small white polka dots scattered over it. The material clung to her curves. He appreciated that particular skirt very much.

Absinthe held the back of her chair for her, ignoring the waiter who looked as if he might conk him on the head and abscond with the girl. She looked regal as she took the seat, smiling up at Absinthe, nearly taking his breath away. Whatever it was that she had affected him like some kind of aphrodisiac. Her small teeth. That mouth with her full, pouty lips that were made for a man’s dirtiest fantasies. He hadn’t had them until she came along. Not like this. Mostly he’d had nightmares. The erotic, very graphic dreams were a welcome change.

“Are you a wine drinker?” Absinthe didn’t know the first thing about wine. He could make her any kind of drink she wanted, or talk beer, but wine eluded him. If she loved wine, he was going to be taking a crash course. It wouldn’t take him long to catch up.

She shook her head. “I actually don’t drink very much. Once in a while, if it’s really hot out, I’ll have an ice-cold beer. But other than that, it’s a very occasional drink and usually I go for something girly like a cosmopolitan.”

“I don’t drink wine,” Absinthe admitted. “Like you I’m not a big drinker, but mostly that stems from wanting to be alert all the time.”

“You don’t put your feet up, relax and have tons to drink?” There was the merest hint of amusement in her voice. Mostly she was serious.

He loved the look on her face when she gave him her full attention. He focused completely on her once he was certain the few couples already eating or waiting to be served weren’t interested in them in the least.

“No, that wouldn’t work for me. I do like to put my feet up though,” he admitted. “I’m going to be very up-front with you.” It was confession time. If he didn’t say it straight up, she’d find out anyway. “I’m not good at this. I never know what to say and I come off stilted and awkward, but I don’t want to be that way with you.”

Her green eyes were hard to stay still under. She seemed to see right through his skull into his mind where chaos reigned—thanks to her.

“I’m not so great at this either,” she declared. “I guess we’re going to have to learn. I’m very competitive and I have a fast learning curve. Very fast. Wait.” She frowned at him. “You weren’t reading a help book on dating, were you?”

“Do they have those in the library?”

Her lashes swept down and then back up. A small smile teased the curve of her mouth, causing his heart to accelerate. He found himself staring. Shit. He was going to lose before he got started because he couldn’t stop staring at her.

She laughed. “I’m not telling you. I’ll read them and turn into a scintillating conversationalist in minutes, leaving you in the dust.”

He instantly learned three things. There were multiple self-help books on dating, she read extremely fast, and she really was competitive. He flashed a small grin, looking at her with hawk-like eyes, giving her the predator look just for a moment. Just to see the shiver that crept down her spine.

“I’ll have to be there first thing in the morning before your shift.”

“You know my shifts?” The smile faded, and she sounded uneasy.

He shrugged. “How was I going to ask you out? I went multiple times without seeing you, so clearly you had a shift and only came into the library during those times. I kept having to trade work with friends, and drive here from the coast, so, I found out when you worked. I came as often as I could, and just waited until we’d established a very tentative woman can charm the socks right off a shy man any day of the week.”

“Is that what we established?”

Her laughter got him every time. He found himself actually relaxing. The waiter hovered, and both guiltily studied the menu. She ordered a pasta dish and he ordered a steak. Fresh-baked bread was put on the table, and he suddenly realized he was very hungry.