Excerpt: Spells for the Dead (A Soulwood Novel Book 5) by Faith Hunter + giveaway 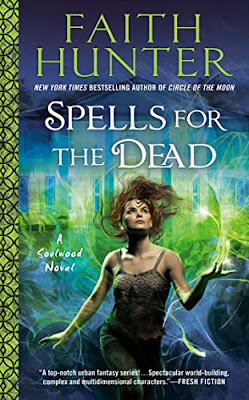 Spells for the Dead (A Soulwood Novel Book 5)

Nell Ingram is a rookie PsyLed agent, using the powers she can channel from deep within the earth to solve paranormal crimes. Together with her team, she's taken on the darkest magic and the direst foes. But she'll need to tap into every ounce of power she has for her newest case.

Nell is called to the Tennessee mansion of a country music star and finds a disturbing scene—dead bodies rapidly decaying before everyone's eyes. The witch on her team, T. Laine, knows this can only be one thing: death magic, a rare type of craft used to steal life forces. PsyLed needs to find this lethal killer fast. But when a paranormal-hating FBI agent tries to derail the investigation, they find themselves under attack from all sides.


EXCERPT FOURTEENThe Nashville witch coven finally showed up, two cars and a van pulling a cargo trailer down the road. The trailer was the portable null room, which the LEOs, the paramedics, and the remaining human victims on-site needed badly. T. Laine had to request a police escort to get the witches onto the grounds, but their faces were apparently known to the locals because their movements were followed by a Primitive Baptist preacher with a bullhorn.The preacher seemed to feel he had a right to give everyone migraines while he assigned every soul but his own to hell. He was stopped at the entrance to the drive and turned back, but even so, things weren’t copacetic with the witches, and the media drones were making sure everything went out to the public.I watched as they pulled up, parked in the middle of the driveway, got out, and—in unison—slammed their vehicle doors. They were all wearing long black skirts and black shirts, like tropes out of a novel about witches. There wasn’t a smile in play as they spread out in a semicircle across the lawn, seven of them, a good number for a coven. They approached the house and the quarantine tents like hunters flushing game. They seemed to have a collective mad on, their eyes taking in everything from the tents to the victims in the unis to the law enforcement types, who were watching them back with penetrating curiosity and a measure of hostility.I moved closer to get a better view and ended up near Officer Alvin Hembest, who stood with one hand on the butt of his service weapon. It wasn’t a very calming stance, and it was echoed by the other LEOs. Putnam County and the surrounding environs appeared unwelcoming to the witches who’d come to save them.When the witches stopped, every eye was on them and the officers were silent, watchful. The witch in the middle was a short woman with shoulders like a linebacker. She was clearly the leader and she raised her voice, shouting, “Why should we help you, when you took one of ours into custody.”“One of yours is in custody?” T. Laine asked, her tone practical and her volume moderated. Though she surely knew the answer to her own question.“Catriona Doyle,” the leader said. “The FBI took her into custody as a person of interest and they won’t let us see her. The agent sent social services to pick up her kid. At school. Her child has been remanded into the system instead of to her sister or to one of us.”“The child’s other parent?” T. Laine asked. 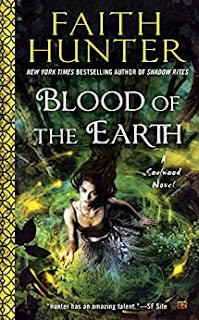 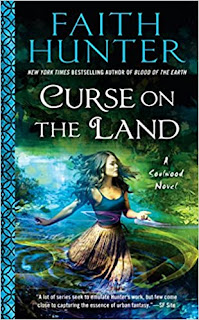 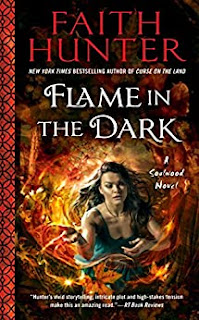 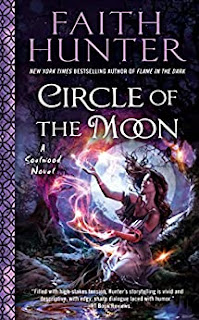 About the Author:
website-FB-twitter-blog
Yellowrock Securities
Gwen Hunter
Faith Hunter is the award-winning New York Times and USAToday bestselling author of the Jane Yellowrock, Soulwood, Rogue Mage, and Junkyard Cats series. In addition, she has edited several anthologies and co-authored the Rogue Mage RPG. She is the coauthor and author of 16 thrillers under pen names Gary Hunter and Gwen Hunter. Altogether she has 40+ books and dozens of short stories in print and is juggling multiple projects.She sold her first book in 1989 and hasn’t stopped writing since.Faith collects orchids and animal skulls, loves thunderstorms, and writes. She likes to cook soup, bake bread, garden, and kayak Class II & III whitewater rivers. She edits the occasional anthology and drinks a lot of tea. Some days she’s a lady. Some days she ain't.

Check out all the tour stops at LTP 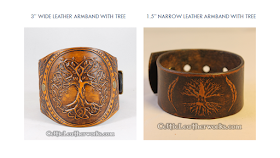 Enter to win some fabulous prizes! Giveaway is open to US residents only.
$25 Amazon or B&N e-giftcard
3” wide armband
1.5” narrow armband