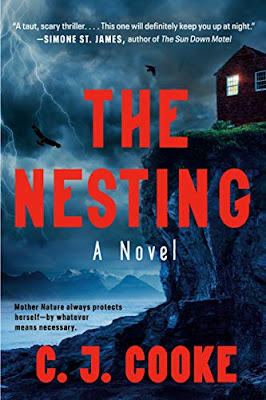 The Nesting
by C. J. Cooke
September 29, 2020
Publisher: Berkley
ASIN: B0838KHDQR
ISBN: 9780593197660
Architect Tom Faraday is determined to finish the high-concept, environmentally friendly home he’s building in Norway—in the same place where he lost his wife, Aurelia, to suicide. It was their dream house, and he wants to honor her with it.

Lexi Ellis takes a job as his nanny and immediately falls in love with his two young daughters, especially Gaia. But something feels off in the isolated house nestled in the forest along the fjord. Lexi sees mysterious muddy footprints inside the home. Aurelia’s diary appears in Lexi’s room one day. And Gaia keeps telling her about seeing the terrifying Sad Lady. . .
Soon Lexi suspects that Aurelia didn’t kill herself and that they are all in danger from something far more sinister lurking around them.
Lexis Ellis’s live-in boyfriend breaks up with her and she has to move out. She overhears a woman on a train mention a job in Norway, with free food and accommodations, as a nanny to two English children. The two women ask Lexi to watch their stuff while they do something. Lexi snaps photos of the woman’s laptop, planning to pretend to be Sophia Hallerton, and do the interview. She gets the job and goes to Norway. She hopes to write a novel which she always dreamed of setting in Norway. But soon finds herself busy with the children, plus she finds a mystery with muddy elk footprints, and the older child, Gia, telling her about the “Sad Lady.”
A haunted mix of gothic suspense and the atmospheric paranormal, the story will draw you in and leave you feeling uneasy even long after the book is done.

I gave The Nesting 4 sheep. 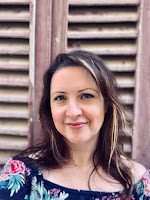 About the Author:
website-FB-twitter
C J Cooke (Carolyn Jess-Cooke) lives in Glasgow with her husband and four children. C J Cooke's works have been published in 23 languages and have won many awards. She holds a Ph.D. in Literature from the Queen's University of Belfast and is currently Senior Lecturer in Creative Writing at the University of Glasgow, where she researches creative writing interventions for mental health. Two of her books are currently optioned for film. Visit www.cjcookeauthor.com