Why Animals are Important in Life!
By Melanie Snow
Author’s note: As a paranormal cozy mystery author and professional animal communicator, my books provide a voice for animals in an awesome and humbling way. The stories are an inspirational medium for them to share their wisdom with you—helping all of us to become better humans. How do I share the voice of the animals with you? By using Animal Communication.
Please Ask Yourself
Did you know that all the animals and pets in your life know things about you that you don't? Did you also know that your pet is here to guide you throughout life by assisting you with your happiness and purpose in life?

Imagine for a Moment
That every animal that crosses your path has a deep and profound lesson for you that can help you change your life!

It's true . . . with their skills your feelings such as fear, anxiety, self-sabotage and lack of self worth can transform into power, intuition, creativity and finding your purpose in life!

How Is This Done?
Basically, our the animals in your life and your companions that share your homes have mastered unconditional love and they will teach you to upgrade your life! So, some of those new crazy behaviors—like peeing on the carpet or new alarm barking that maybe driving you crazy are special messages from them to you to start paying attention to the way you live life.

They constantly provide you with behaviors, gestures, actions and more to guide, teach and help you take hold of your life so you can be happier, more loving, kinder, successful, peaceful and the list continues!

5-More Reasons Why It’s Important To Listen To The Voice of Animal!
First, by connecting and communicating with them on an energetic spiritual level, they will translate personalized information about...
What actions you need to take to transform your feelings that are holding you back!
How your spiritual path is directly connected to their spiritual path!
How to live a healthier and calmer lifestyle!
How to practice strength, balance and clarity!
Ways to trust your intuition! And more!

Most Exciting
The most exciting thing about trusting your own intuition and animal intuition the awareness and bond you have with them becomes more profound. When you connect with the energy of an animal you can get information about the bigger picture of your purpose in life.

Remember, all animals can be your teacher to help guide you into your soul level awareness—just like they do with Sarah Spellwood the protagonist in the series, The Spellwood Witches.

Don't Wait Any Longer!
The time is now to listen to the animals in your life and receive the gift they have for you . . . it is the greatest gift that you can give to them! 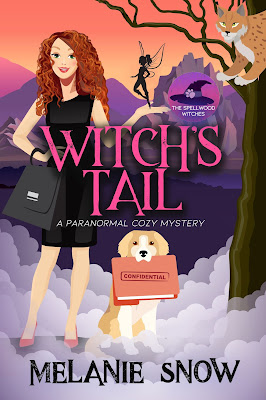 Can she awaken her dormant powers and stop a desperate killer destroying the forest?

Sarah Spellwood feels she’s hit bottom. Divorced and jobless, she relocates to the enchanting village of Witchland intent on solving the murder of her late mentor. But as she pursues clues buried in the man’s fight to save the endangered forest-dwelling lynx, she makes an enemy of a ruthless land developer.

Encountering fairies in the woods, Sarah discovers she’s been repressing unique gifts passed down from her ancestor and founding witch, Lativia Spellwood. But though she can now hear her deceased friend’s dog speak, she isn’t sure her abilities are enough to expose the greed and corruption covering a killer’s lies.

Can Sarah work with the magical beings to bring a murderer to justice?

Buy Witch’s Tail to set a snare for an assassin today!
Amazon 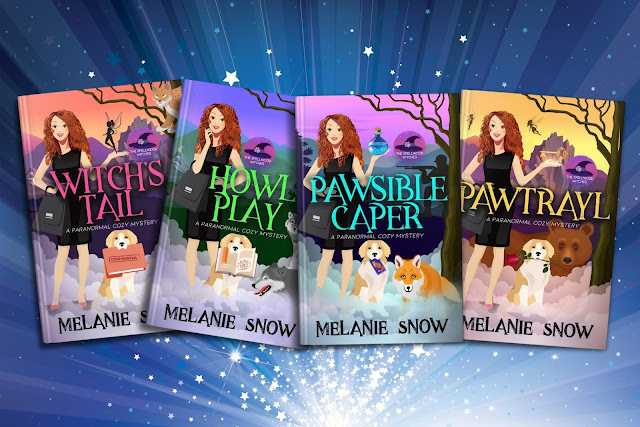 Prologue
Lativia Spellwood sat on her ghostly throne of branches on the summit of Mount Katribus, with many other ghosts swarming around her reminiscing about life and drinking wine.
The ghosts of Witchland residents always came to this clearing after they died to stay near Lativia for guidance and to wait until they were ready to pass on to the afterlife. Lativia had been dead for hundreds of years but had still not passed on, for her work overlooking Witchland and its forest was not yet done. One day, it would be, and she was beginning to welcome that time, for she was growing very tired.
A tiny troop of Leekin faeries moved about the arms and legs of Lativia’s throne, placing flowers into the holes between the woven boughs. They did that every day, as a way to honor her as Queen of the Forest.
Lativia sipped from a goblet of ghost wine, enjoying the blue fire as it spread down her throat, engulfing her in tingly warmth. Being a ghost was always cold; the magic wine was one of the few momentary sources of warmth that she could cherish.
“What else do you need, my queen?” chirped one of the Leekins, buzzing on tiny brown wings before her nose.
Lativia smiled. “I think it’s time I checked on Sarah, don’t you agree?”
The Leekin nodded excitedly and flew off into the woods. A huge bunch of Leekins soon returned, flying in formation to carry the weight of a glowing crystal ball. They lowered it to Lativia’s lap, where it sank through the spectral outlines of her legs. Lativia could pass through things, and things could pass through her, for her physical body was long gone and all that remained was her powerful soul
Lativia smiled even more broadly and began to draw her transparent ghostly hands over the ball, summoning the blood bond she shared with her descendent, Sarah Spellwood.
Gradually, the fog inside the ball began to clear and an image of Sarah’s frizzy explosion of red curls filled it. Lativia drew back a few feet with her mind and saw Sarah was at a coffee shop ordering a vegan sandwich. Sarah’s love and respect for animals always made Lativia proud. She noticed there was a conspicuous pale and indented band of skin on Sarah’s ring finger where her huge diamond wedding ring had once been. “That no-good husband of hers is finally gone!” Lativia crowed with delight. But then she noticed that there were bags under Sarah’s eyes, the bags of someone who had been up all night crying. Sarah must be heartbroken, Lativia thought with a heavy heart.

The barista serving Sarah froze when she saw Sarah’s last name on the credit card receipt. “Um, are you related to . . . ?”
Sarah drearily raised her hand. “Yep, I’m descended from Lativa Spellwood.”
“That’s amazing! I mean, have you ever been to Witchland and looked at the Lativia memorabilia?” The barista’s pigtails wiggled with her excited body language, and Lativia felt a swell of pride that people still remembered and even revered her. It had been four centuries and she was still honored as the greatest witch of New England, the one who had turned into a wolf and fought her way free of her captors at the Salem Witch Trials!
“Yep,” Sarah said, her voice full of annoyance. It was clear she was ready to dash out of the coffee shop.
As good of a lawyer as Sarah was, Lativia noticed how awkward she was around most people, and how little she liked to disclose personal details, especially of her magical ancestry.
Sarah was a woman of facts and logic, which is why she fought the magical powers pulsing through her like a current, trying to pull her back to her destiny. Her resistance to her true self and her stubborn adherence to logical facts made her unpopular with many people. Lativia yearned to watch Sarah blossom into her beautiful potential.
“Don’t you see?” Lativia cried. “You are not meant to be in New York! You should be here, following your calling, completing my work as a witch! You’re not happy there!” But Sarah couldn’t hear these words.
“Yes, yes,” several Leekins agreed. A ghost who was standing near Lativia also nodded his head.
Sarah trudged out of the coffee shop, carrying her drink and the sandwich in a paper bag. A man in a trench coat bumped into her, and she hastily checked her pockets to ensure he had not pickpocketed anything. Then she continued on to her office, a massive steel gray prison with spikes in the window ledges to repel pigeons. There was no sign of life anywhere but for the scraggly maple planted out front of the building and a few waxy tropical plants blooming inside the lobby. Lativia groaned, feeling the despair and coldness of the place.
“It’s time for you to come here, to your destined home,” Lativia declared. “My Leekins have told me about the Hunter tracking lynx and the land surveyors, and I sense that there is about to be trouble in the forest.”
At the mention of the Hunter, the Leekins gathered around her throne began to turn blue and tremble in terror.
“I am not strong enough to fight these battles much longer, so I need you to come home, to come into your true self. Your marriage fell apart of its own accord, and I sense your job is about to unravel on its own, too. You can’t fight destiny,” Lativia said, giving the group of hovering Leekins their crystal ball back and shutting her eyes. “I could use magic to bring you to your destiny sooner, but it is evil to interfere with one’s life that way. I can only hope you don’t take much longer.”
She opened her eyes as the Leekins cried, “We need her!” 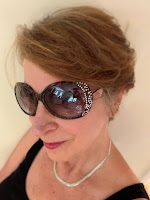 About the Author:
website-FB-Instagram
goodreads-amazon
FBgroup
Melanie Snow is the pen name for Wendy Van de Poll, a bestselling author, pet loss grief coach, and animal medium. She is the author of The Spellwood Witches, a paranormal cozy mystery series.

Her books weave together positive magic, snarky forest faeries, and insightful animals with fun and eclectic humor. True life adventures and intuition are woven into her stories laced with unbridled imagination.

She has been followed by wild wolves in minus 60 degrees, hissed at by a mama bobcat, and played ball with a wild owl—among other animal encounters. 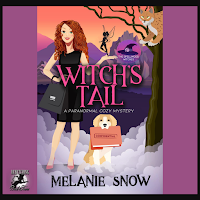