What can you tell us about your new release, 2HVØRHVNØT: To Have Or Have Not?
The numeronym title 2HVØRHVNØT came to me in a serendipitous moment while driving with my family. I remember thinking about To Be or Not To Be, while pondering the idea of the Haves and Have Nots. Seeing the numeronym appear in my head, I envisioned it as a defaced identification tattoo on a wrist of someone oppressed by the government. The whole story developed from trying to figure out how that would have happened.
2HVØRHVNØT: To Have or Have Not is a fast-paced, genre-bending murder thriller set in a dystopian future where the superpowered Mighty oppress the powerless Citizens. Mario’s identity tag is 24VØR4VNØ, but he defaced it when he was a kid to spell out the numeronym To Have or Have Not, after the Mighty took away his parents and left him to raise his younger sister Zelda. The whole story takes place from 5:46am to 8pm in a single day, starting with Mario waking up late for work.

As he waits in line, he has no idea his boss is dead, and an adjudicator named Tanalia, who is one of the telepath-seer monks that police Fellowship City, is on her way to arrest him for the undetected, grisly murder.

The book is split into three parts with Mario being the primary protagonist of part I. However, in part II, his sister’s adventure begins as she searches for her brother in a city besieged by a monstrous killer.

This book combines some of my favorite things to read: science fiction, fantasy, superpowers, post-apocalypse, dystopia, and horror. There’s also elements of romance and suspense, and it is littered with subtle pop cultural references and social commentary throughout. I write what I want to read (or watch). My hope is that others like what I like, because I’ve got a whole world I’m building, and I’m ready to entertain. 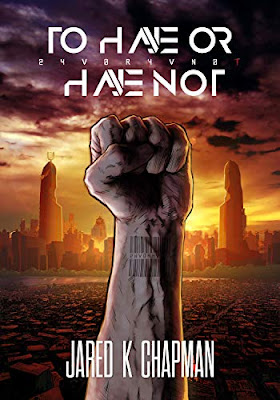 2HVØRHVNØT: To Have or Have Not
by Jared K. Chapman
Sept 8, 2020
Genre: YA, Dystopian Superhero Fantasy, Horror, LGBT
492 pages
Welcome to Fellowship City, where the Haves are super-powered, and the Have-Nots are just like you.

The Mighty have all the wealth, fame, power, and superpowers, but even they are subject to the monastery’s control. To maintain peace, telepathic monks see into the past, present, and future to police the other Mighty and the minority of powerless Citizens, who have nothing but their identity tags tattooed on their wrists.

Twenty-year-old Mario lives with his kid sister in one of the many camphouses on the island south of the city. Unlike the other citizens he stands in line with every morning waiting to be bussed to work, he actually likes his downtown job and the Mighty restaurateur who employs him.

At least, he did.

This morning, the grisly, undetected murder of his boss changes everything. In a flash, Mario becomes the primary suspect and must race against time to prove his innocence in a world that oppresses the powerless.

Part READY PLAYER ONE. Part DIVERGENT. Part MINORITY REPORT. Totally Superpowered! 2HVØRHVNØT has fast-paced action, suspense, horror, and mature themes that are sure to keep readers on the edge of their seats.
Add to Goodreads
Amazon-Website
Book Trailer:
https://youtu.be/yhtL31D0eeI 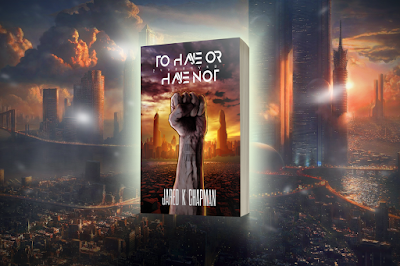 But I’m fast for a man in a black suit, he chortles at the thought. All these other workers, leaving their camphouses now and taking their sweet ass time as they stroll toward the bus stop, are probably looking at me and thinking, glad I’m not that guy.

Ahead of him, he glimpses an older woman with salt and pepper brown hair tied up in a bun with white lace, walking at a steady pace. As he closes in on her, he recognizes the stereotypical black and white uniform of a French maid she’s wearing.

She must work for some richy-rich Mighties up in Emerald Hills, he thinks, a little jealous. They love dressing up their workers in crazy shit like that. I’m surprised she’s living in the WPC and not in the Normal slums with all the other preferred workers. I bet it’s a new gig, and she’ll be moving on up real soon.

He often ponders what life might be like if he lived outside of the WPC, wondering if a place in the Normal slums (or what the Mighty call southside ghetto) would truly afford more freedom at all.

Having to wear a ridiculous outfit just to land a cushy job up there might not be worth it though, he thinks, loosening his collar and adjusting his necktie, as his short-lived jealousy fades away.

He hurtles by, startling her.

She jerks out her earbuds and yells, “Watch out!”

He waves his hand in the air without looking back or slowing his gait. At the next block, he jumps up and high-fives the Luxuria Street sign.

He laughs, picking up his pace, trying to cut ahead of the many people leaving their homes for their 7 a.m. shifts.

Come on. Come on, he thinks, racing forward, trying to ignore the soft rumbling of a crowd.

The noise builds, rising into a voluminous cacophony of chatter, as he crosses Tristia Street. He can no longer ignore the sound of the gathered mass of people waiting in the bus line, not moving an inch.

“Son of a bitch!” he exclaims, zipping by people of all shapes and sizes, costumed and uncostumed.

In the distance, he spots a lone bus exiting Olum Bridge toward Citizen Way. He bolts toward the front of the line, passing a myriad of glowering faces. The weight of their judgment does nothing to slow him down.

“No cutting!” a woman’s voice shouts, but he disregards her and runs faster. The crowd’s murmurs merge into some foreign-sounding condemnation where the words are unintelligible, but the tone is clear.

“I’m sorry,” he apologizes, galloping past the gawking onlookers. “I need to get to work. I can’t be late!”

No one is fooled by his lip-service apology, but they do understand his dilemma. Not that his boss will. He’s not the most forgiving about tardiness, and the recent promotion from the kitchen to the dining room floor would likely be the first thing on the chopping block.

I don’t want to be back in the kitchen all the time, he thinks. Or worse. It could be a lot worse.

His eyes lock onto the bus, as it creeps toward the bus stop. He rounds the front of the line, maneuvering through the crowds of other workers to inch closer to the door of the bus before it burps to a halt. He grins ear to ear.

Mere steps away from the doorway, his smile rips from his face in a sudden jolt of panic, as a massive reptilian tail drops in front of him like a boom barrier at a railroad crossing.

“Where do you think you’re going?” the guard inhumanly snarls.

About the Author
Website-FB-Twitter
Instagram-Bookbub-Amazon
Goodreads-FB Group
Jared K. Chapman is an author, filmmaker, and educator. He is a native Californian who spent his formative years at school in frigid Alberta, Canada with his father and summer vacation in arid central California with his mother. He holds degrees in psychology & religious studies and is currently a doctoral candidate studying the social psychology of extreme groups. He lives in a little oasis just east of Los Angeles with his wife and three sons. 2HVØRHVNØT is his debut novel.