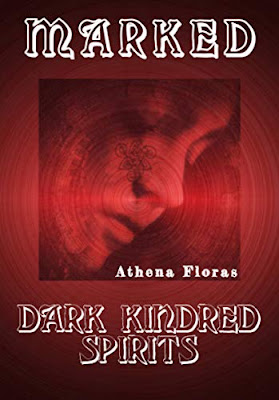 When there is darkness, seek the light…

Sebastian Falls has known his fair share of pain and sorrow in his life. His world is one filled with evil and danger. He’s learned to keep his emotions to himself and not let anyone get close. It’s the only way to not get hurt. But when he meets Ariel Olivier, the shy, awkward girl in his class, he wonders if he should continue to stay in the darkness. There’s something about Ariel that makes him want to let her in.

Ariel Olivier never knew when she got a tattoo on her eighteenth birthday that her whole world would change for the worse. From that moment on, her normal, mundane life turned into something sinister. An evil grows within her and it threatens to consume her and all those she cares for.

There is only one person who can help her vanquish what wants to destroy her, the alluring, mysterious Sebastian Falls. She can’t help but be drawn to him. He comes from the same evil world that is trying to kill her. Can she trust him and her growing feelings or let whatever dark power that is controlling her take over completely?

Amazon-Amazon.co.uk-Amazon.ca
Excerpt: Ariel Olivier’s wandering mind never rested. It kept her occupied at the most inopportune times, like right now in her Humanities’ class. Mr. Brentwood’s monotone voice as he read a passage in the reference book on religion and its influence on politics was the driving force propelling her thoughts away from the subject matter. This was her least favorite class. She probably wouldn’t have chosen it if another Humanities subject was available in the same timeslot. But there hadn’t been, so she was stuck with this boring class and Mr. Brentwood’s unemotional and slow-paced teaching methods for the rest of the semester. The squirrel doing a balancing act on the powerline outside her window had her undivided attention at the moment. It seemed to stare at her, urging her to open the window to let it in. It was cold outside. The puissant wind blew the fur on its puffy tail, making it shiver. If she could do it undetected, she would have let it in. She hated to see it suffer. When the squirrel saw she wasn’t budging, it scurried farther down the powerline, searching for another opportunity to come into the building. She sighed, glancing down at her watch. There was only a few more minutes of class left and then her school day would be over. She couldn’t wait until she was out of the school. Throughout the entire day, she worried someone would realize it was her birthday and wish her best wishes. She hated drawing attention to herself. She was shy and reserved. She felt the most at ease when she could sit in class or in the library and not be seen or heard. Being invisible was what she thrived for, because it meant freedom without prejudice. No one could criticize her bad posture when she sat or how her hair curled untamed. Or how she wore only monotone colored clothes and hated patterns of any kind. She could be herself and not be judged for any quirks, odd habits, or preferences she might have. Mr. Brentwood flipped the massive textbook closed. The echoing noise it produced sliced into the silence drawing her out of her reverie. She blinked focusing on his words. “That’s the end of today’s lesson. I’d like you all to read the next chapter in the book and we’ll discuss it on Tuesday.” All of a sudden, he honed his gaze onto her and he smiled. “I almost forgot one very important thing to mention before you go.” She shifted her eyes and fidgeted in her chair. Somehow, she knew what he’d say next. She should have expected it. He always did it for all of his students. “It’s Ariel’s birthday today. She turned eighteen. Please wish her along with me a happy birthday.” All eyes turned to look in the direction Mr. Brentwood focused. Only a couple of the students knew immediately she was Ariel. The rest seemed to have noticed her for the first time, as if they never knew she existed before now. She felt her cheeks burning. She wanted to crawl under her desk and hide. * * * * Sebastian Falls witnessed the chaos from afar. He cringed noting the scene was stressing Ariel out. He didn’t know her personally. They’d been in the same Humanities class for the past month and had never spoken to one another. But from the frequent times he’d observed her from the back of the classroom, he could tell she was a lot like he was, an introvert who didn’t like talking in class. Too bad Mr. Brentwood hadn’t figured that out yet. The worst thing he could have done, he did. Drawing everyone’s attention to the fact it was Ariel’s birthday was freaking her out. Her cheeks turned beet red and she couldn’t keep eye contact with the students as they swarmed in and offered her happy birthday wishes. He even caught her eyeing the door. She obviously was contemplating running the hell out of there. If he were in her shoes, he probably would have been thinking the same thing, except his reason was different from hers. She was shy and awkward. He just hated crowds and wanted to be left alone. Grabbing his books, he made his way out, avoiding the traffic jam around her desk. It was getting too busy and too noisy for his liking. Peace and quiet were what he thrived for. He couldn’t get it at home, but he made damn sure to get it at school. He walked into the hallway and leaned on a random locker waiting for the perfect time to act. He had no idea how long he’d have to wait—a minute, ten minutes, or even half an hour. But he didn’t mind. It would all be worth it in the end if everything fell into place like he planned.

About the Author:
Website-Amazon -Twitter
Athena Floras is a wife and proud mother of three who loves to read and write suspenseful and romantic stories. When she isn't busy being a mom, she spends her spare time in her den, totally immersing herself into the whimsical, fantastical world of fiction. She hopes the stories and characters she creates will bring readers as much pleasure and entertainment as they have her.
Tweet 1: Marked is the first novella in the YA paranormal series Dark Kindred Spirits. It delves into magic & that fine line between reality and the sublime. Evil often weighs on goodness and vice versa, but when that balance is disturbed, things will get deadly. https://amzn.to/33yOsv4 Tweet 2: When an evil begins to grow in Ariel Olivier & threatens to consume her & everyone she cares for, it’s up to Sebastian Falls to figure out a way to stop it. Can he save the girl he’s falling for before it’s too late? https://amzn.to/33yOsv4 #YA #ParanormalRomance #horror #Demons
Tour Giveaway
$30 Amazon.com e-Gift Card
a Rafflecopter giveaway