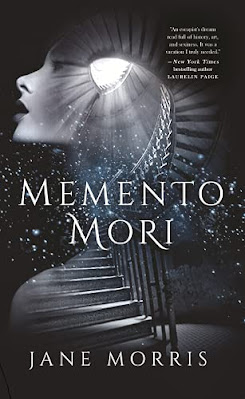 Memento Mori
by Jane Morris
June 15, 2021
420 pages
Genre: Contemporary Historical Retelling, Victorian
A modern-day reimagining of the lives of the Pre-Raphaelite artists and the women they painted obsessively and fiercely loved. Beautiful and strong-willed Jane meets her match in enigmatic artist Gabriel. He immediately challenges her assumptions about art, life, and love. And for Gabriel’s enormous ego, Jane represents an exhilarating yet exasperating game he refuses to lose. When Jane’s brilliant but naïve friend Lizzie insists on accepting Gabriel’s dinner invitation, they are swept into a circle of passionate artists who reside in an old Gothic mansion. Jane embarks on a life-changing journey of desire, romance, despair, and self-discovery as she becomes the muse for Gabriel and his friend and rival, Will. A desperate inner battle wages within Jane, who is drawn in by Gabriel’s magnetic personality and gorgeous looks, yet equally as captivated by Will’s kind heart and steadfast devotion. Underneath an immersive and dramatic world is a deeper storyline, as Jane and Gabriel can't fight the nagging feeling that they have done this all before. Fates collide as lovers and friends become entangled in past, present, and future. An artistic, genre-crossing tale, Memento Mori will appeal to both history and romance lovers alike.
Amazon
Exclusive Excerpt:
He moved faster and followed us out of the exit. Then he stood directly in front of us, blocking our path. “Yes?” I said a bit bitchier than I meant it.

“I’m sorry. I know this must seem weird. There’s just something about you. I can’t let you go just yet.”

“What the fuck is that supposed to mean? You can’t let us go until what?”

“Until you let me paint you,” he said as he stared intensely into my eyes. “Both of you.”

“I’m sure there are a lot of girls who would die to be painted by you,” I offered. I can’t say I wasn’t flattered, but it seemed like a cheap pick-up line.

“I mean, I’ve painted lots of other girls!” His face was inches from mine. Then he turned to face Lizzie. “You have one of the most stunning faces I have ever seen. It’s like you just stepped out of a Florentine fresco. Your hazel eyes that change in the light, that pouty bottom lip you see so often in paintings of saints, and your dazzling blonde hair that shows a touch of copper when you step into the light… You are just what I’ve been looking for, and I’ve been looking for a long time.” She swooned while I laughed out loud. But then he turned to me and stepped up so close that our noses practically touched. “We have definitely known each other before, but where or when, I can’t quite say. Your long neck, blue-gray eyes, graceful hands… You’re so profoundly beautiful; it’s startling. I want to paint you as a goddess or an ancient queen. Please, let me preserve your beauty forever in my art.” He turned a page in his sketchbook and held it up. There was a sketch of me in front of a mass of trees, and he captured my likeness really well but made me look much prettier than I actually was. Stunned by his words and the sketch, I was locked in silence, unable to speak.

“I’ll admit,” he continued. “I was drawing you for a while today before we spoke. I couldn’t help it. You captivated me.” It seemed sincere, and I almost leaned in to kiss him but shook it off.

“Look, this is really weird. We don’t know you at all.” I couldn’t come up with anything else to say, so I crossed my arms and waited for his response.

“Have dinner at my house tonight. And if you feel comfortable, maybe after that I can do some sketches of the two of you.”

“This is crazy. I don’t think this is a good idea.” As cliché as it sounds, my mouth was saying no, but my body was screaming yes. I knew there was no way I wasn’t going to his house, but the sixth sense I had developed for bullshit was begging me not to. Lizzie stepped in front of me and exclaimed, “We’ll be there!” He flashed that coy smile as he took out a scrap of paper and scribbled his address on the back, then handed it to Lizzie. He turned to me and whispered, “Isn’t there something so familiar about this, you and me?” He looked so intensely into me that I couldn’t even formulate a response. There was definitely something familiar about him. But I wasn’t about to let my guard down just yet. “I don’t know about that.”

“I feel like we’ve been here before. You feel it too, don’t you?” If he weren’t so fucking stunning, I probably would have laughed in his face. “I’m not sure what you’re talking about, but we have to go.”

“Yes, we’ll be there!” she called back as I pulled her away from him.

“Don’t count on it!” I added. We exited the museum in silence until we were far enough away. Then we turned to each other and screamed, “Holy shit!”

About the Author:
Instagram-FB-Book FB
Jane Morris is the bestselling author of four comedic memoirs about her teaching career. She has taught English for over 15 years in a major American city. This is her first novel. She received her B.A. in English and Secondary Education from a well-known university. She earned her M.A. in writing from an even fancier (more expensive) university. She loves dogs and trees and other things that can't talk. She has a loving family and cares about making people laugh more than anything else.