The Story Behind the Story: A Slave's Revenge Hell Holes Book 4 by Donald Firesmith + giveaway 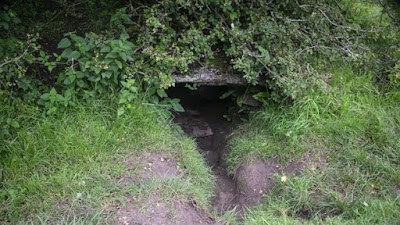 Oweynagat (which is pronounced “Owen-ne-gatt” and means Cave of the Cats) is the name of an actual cave located at Rath Croghan, Ireland. Ancient legends state that many evil and destructive creatures have emerged from the cave, especially on Samhain, the start of the Celtic New Year. These include a three-headed monster, wildcats, and red birds whose breath withered plants. Referred to as the hell-mouth of Ireland by medieval texts, the cave is also said to contain a portal to another world. It seemed a fitting place to be the source of the hellhounds that attacked Aileen’s village and killed her parents, the terrible event that led to her joining the Tutores Contra Infernum.
With the exception of the hell holes, I have taken great pains to ensure that the Alaskan settings in the book are as they are in real life. To achieve this level of realism, I flew to Alaska, drove the Dalton Highway up to the Yukon River, and toured Eielson AFB. I have relied heavily on Google maps, Google maps street view, photographs of Coldfoot and the Trucker’s Café, and both photographs and articles on military equipment such as Strykers and Pave Hawk helicopters. I also used multiple military advisors. 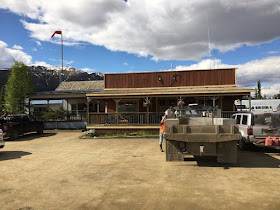 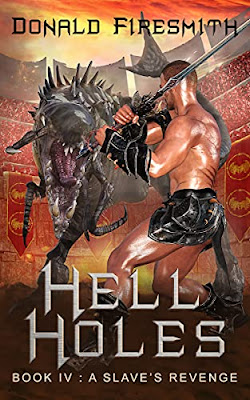 A Slave's Revenge (Hell Holes Book 4)
by Donald Firesmith
August 1, 2021
Genre: SciFi, Paranormal Horror
When demonic aliens kill his father and transport 15-year-old Paul Chapman, his sister, and mother to Hell as slaves, he learns just how far he’ll go to survive, get revenge, and regain his freedom.

After killing his father, a marauding band of alien demons captures 15-year-old Paul Chapman, his mother, and his twin sister. Taken as slaves and food to Hell, a planet orbiting a nearby star, their survival is extraordinarily difficult and far from certain. As the years pass, Paul learns he only has two choices: live as a powerless slave or die as food for his masters. How much must Paul collaborate with his demon masters to survive?

Hell Holes 4: A Slave's Revenge is a prequel to the first three books in the series. Paul Chapman, its protagonist, is also a character in Hell Holes 3: To Hell and Back.
Goodreads-Amazon
Book Trailer:
https://youtu.be/PmoBgedM-OM 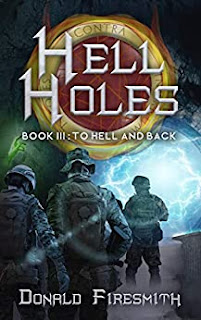 To Hell and Back (Hell Holes Book 3)
Goodreads-Amazon 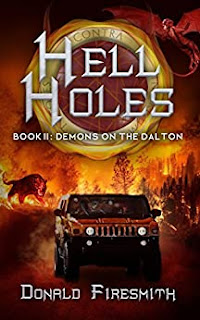 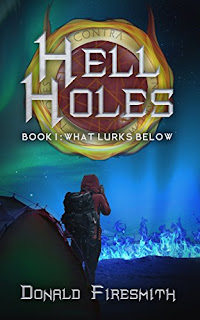 What Lurks Below (Hell Holes Book 1)
Goodreads-Amazon
Book Trailer:https://youtu.be/kUokP5NycfA
Hell Holes: What Lurks Below
Excerpt – In The Hole
“Professor, take a look at this,” Mark said, squatting down and pointing at the nearest mound of dirt. He held his hand a few inches over it. “There are small holes, and I can feel gas escaping from them. That’s weird; it should be freezing, but it’s actually warm.” He leaned over and sniffed the air just above the hole. “Jesus, that reeks,” he cursed as he stood up and rubbed his eyes.

I reached down. There was a surprisingly large flow of gas coming out of the hole. I looked around at all of the other mounds of dirt dotting the ice on which we were standing. “Shit,” I exclaimed. “We’ve got to get the hell out of here.”

“Why?” he asked with a confused look on his face. “We just got here.”

“Prudhoe Bay natural gas is about three fourths methane. One eighth is ethane, propane, and other heavier hydrocarbons, while the remaining eighth is carbon dioxide. I’m not worried about the methane and ethane; they’re lighter than air and will drift up and out of the hole. But carbon dioxide, propane, and hydrogen sulfide are all heavier than air and build up in low areas.”

“Like the bottom of this hole,” Mark said as the nature of our danger dawned on him.

Although I was breathing rapidly, it was becoming increasingly harder to catch my breath. Both were early signs of carbon dioxide poisoning. Meanwhile, my eyes were really watering, my nose was running, and my lungs were starting to burn. Hydrogen sulfide combined with the water on their moist surfaces to form hydrosulfuric acid. I had a dull headache and was becoming increasingly nauseated. Worse, the stench of sulfur had begun to disappear: a classic symptom of hydrogen sulfide poisoning. “We have to head back up and strap on oxygen tanks and full face respirators before we come back down.”

“Okay, Professor,” he replied, looking at me with concern. “You’re definitely not looking so good.”

Weak and increasingly clumsy, Mark had to help me reach the rope and secure it to my climbing harness. Then he said into his walkie-talkie, “Angela, there’s hydrogen sulfide and excessive carbon dioxide down here, and we need to get out of here right now. It’s made the professor sick, so I’m sending him up first.”

“Understood, Mark,” Angie replied, her voice indicating her concern. “Is he ready?”

“Yes, all hooked up,” Mark replied.

A second later, the rope began pulling me up. It sped faster and faster until I was practically running up the side of the hole. Soon, I was up to where the permafrost gave way to damp dirt. I slipped going over the boundary, and the rope dragged me face first over the short muddy slope. Bill helped me climb over the ridge of dirt surrounding the edge and unhooked my climbing harness.

Coughing and unable to catch my breath, I stumbled into Angie’s arms. The caustic gasses at the bottom of the pit had set off one of my ordinarily rare asthma attacks, leaving me gasping for air. I fumbled through my pockets, found my rescue inhaler, and had to give myself three puffs before my breathing became easier. Meanwhile, my eyes were still burning and watering so heavily that I heard rather than saw Bill throw the end of the rope back into the pit and use the winch to lower it rapidly into the hole. After helping me wipe the mud from my face, Angie wrapped me a bear hug, totally heedless of the muck she was transferring to her own face and clothes.

“It’s down,” Jill said, her voice amplified through our walkie-talkies.

Bill stopped the winch, and we waited for Mark to tell us when he was ready to come up.

Bill restarted the winch, and the rope began winding itself back around its spinning shaft.

Feeling stronger, I let go of Angie and turned back towards the pit so I could watch Mark being raised over the edge. It was at that moment, through eyes still somewhat blurry from tears, that I saw Kowalski. He was standing near the edge of the hole, a few feet downwind so that the smoke from his cigarette wouldn’t bother us. He took a final puff and carelessly flicked the still smoldering butt into the pit.

“Stop!” I croaked, my voice raspy and painful from coughing.

Kowalski turned towards me, and our eyes met. Unaware of what he’d just done, he was completely confused by the expression of horror on my face.

After seconds that seemed to stretch into eternity, the cigarette butt tumbled past Mark and eventually reached the depth where the concentration of methane and hydrogen sulfide reached explosive levels. 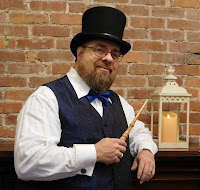 Prior to recently retiring to devote himself full-time to his novels, Donald Firesmith earned an international reputation as a distinguished engineer, authoring seven system/software engineering books based on his 40+ years spent developing large, complex software-intensive systems.

He lives in Pittsburgh, Pennsylvania with his wife Becky, his son Dane, and varying numbers of dogs and cats.

Giveaway
Autographed Book of Hell Holes 1: What Lurks Below (US only)
$10 Amazon giftcard
-1 winner each!
Follow the tour HERE for special content and a giveaway!
a Rafflecopter giveaway