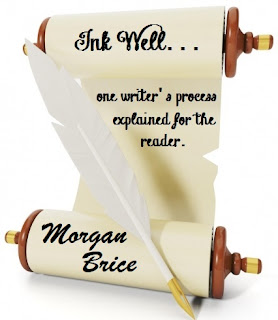 If you ask any two writers about their process, you’ll get three answers. We’ve all got our own ways of doing things, and as long as it works for us, that’s all that matters. There’s no wrong way as long as you get words on page and tell the story you want to tell.

My process has evolved over the years, not just with gaining more experience as I’ve written more books, but also from adapting to writing multiple books a year. But for what it’s worth, here’s a peek behind the curtain.

I usually start with a vague idea of where the story is going, and a very loose outline of the main plot points. If it’s an existing series (like adding Blink to the Treasure Trail world), I already know the names of the main and supporting characters, key locations, and some history. The fun of existing series, especially with romance, is to get to know all the characters a little better in each book, give them some new insights into themselves, and move the relationship along to a new level. So I’ll make notes to myself about those elements—either ideas I’ve already had or reminders that I need to address later.

Next is usually research. I try to base the hauntings, magic, monsters and historic elements on something real, and then take some authorial liberties to adjust for the story. If possible, I love to find things that actually happened in the book’s location, but I’ll also ‘relocate’ a good element from elsewhere if it suits the plot. This is where I get ideas for the subplots and flesh those out. Sometimes, I’ll find something that is so good I’ll change a main plot element to be able to use it!

I try to set books/series in places that I’m familiar with so I can do a better job of capturing the location’s ‘vibe’. Since I can’t always plan a trip to do additional research, I’ve learned to use what I can find on Google images and YouTube, plus Google Earth. Those are amazing resources that help me see locations so I can get the details right.

Telling the story requires thinking about pacing as well as plot, so I try to plan out chapters and the sequence of what happens so that there’s a mix of action and discussion. If I know what’s going to happen in the next book (the big pieces, anyhow) I will drop some hints.

Once all those things are done, I write a detailed outline so I can see how the story flows, balance action and dialogue, and make sure I know what needs to happen in each chapter. I also need to make sure that I’ve dropped enough hints (foreshadowing) that things happening later in the book don’t just show up out of nowhere. The outline often changes as I get into the writing and move things around, but it’s an essential way for me to gather my thoughts and avoid needing massive revisions later.

Then I put my butt in my chair and write. 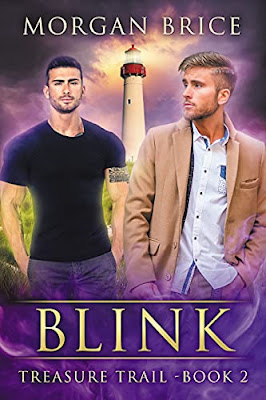 Erik Mitchell helped Interpol bust cartels, oligarchs, and spoiled billionaires for art fraud. As an undercover cop, Ben Nolan helped bring down a Newark crime family. Now Erik and Ben have started over in Cape May, leaving their danger-filled jobs behind them, excited about a fresh start and their new relationship.

Time is running out to lift the curse. The Russian Mob wants revenge on Erik, and the Newark Mob is gunning for Ben. A grieving ghost seeks justice. Secrets, lies, and deception unravel in the blink of an eye.

Erik and Ben were planning for happily ever after. But unless they can outwit witches, wraiths, and wise guys, they could go down in a hail of gunfire and a blast of dark magic—and see their plans go up in smoke. 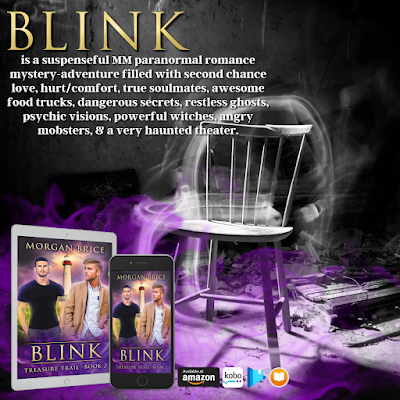 Join us over on Instagram for more of Blink!
Excerpt:
Ben hadn’t been sure he’d last longer than the summer until he met Erik.

After the fiasco of his previous relationship, Ben had doubted the “right one” was out there. He and Erik had hit it off, then managed to solve a long-ago murder, piss off the Mob, and nearly get themselves killed. Through all that, the spark between them burned hotter than ever. If that isn’t true love, I don’t know what is.

Ben shuffled the papers on his desk, mostly bids from contractors for renovation projects on several units now that the peak season was over. He was looking forward to the slow months, and at the same time, felt a little queasy.

Over the summer, he and Erik had been so busy settling into their new businesses that their relationship was built on dates and dinners out. There hadn’t been time for spending long hours together, having deep or difficult conversations—the kind of things that needed to happen to build a lasting relationship.

Fall brought with it more free time, and that scared Ben. What if I’m not really what Erik wants or needs once he really has a chance to think about it? He handled international art theft, worked with Interpol, traveled the world. I’m a Newark ex-cop with issues. I know he loves me, and I love him. Will it be enough?

Alessia Mason had said she sensed Erik and Ben were soulmates. Ben had never believed in that kind of thing before now, but after how quickly he and Erik had formed a bond, Ben was reconsidering that belief. Even if that’s true—and God, I want it to be—we’re going to have to work at it. Make it good; keep it strong. I’m not going to fuck this up by taking anything for granted.

He pulled himself out of his thoughts and focused on a more pressing concern. Cafaro’s name triggered bad memories. While he and Erik had solved one mystery about a long-ago murder, doing so had unearthed information about other crimes some people preferred remain forgotten. They’d nearly ended up dead, and part of the fallout was discovering that old Mob ties were alive and well in Cape May.

While they had solved a murder from the 1970s, Ben had acciden‐ tally found incriminating evidence implicating Vincente Cafaro in another killing. Cafaro had owned the grand, cursed Commodore Wilson Hotel and had connections to a lot of other enterprises.

Cafaro himself was long dead, but as Ben and Erik had learned the hard way, old crimes could reveal a web of secrets and lies that threat‐ ened the living, who would go to deadly lengths to keep the past buried.

For his own peace of mind, Ben had created a program to scan the web for any mention of known Mob players he’d had a role in arrest‐ ing. He wanted to keep tabs on where they were and what they were doing—and whether they were anywhere near Cape May. Ben consid‐ ered the tracking program to be an early warning system. Having one of the mobsters he had tangled with in the past show up might not mean anything—but just in case, Ben didn’t want to be caught by surprise.

He’d checked the program every couple of days when he first moved to Cape May. Ben might have left his former home, but the undercover bust that had gone wrong had Mob ties—and Newark wasn’t that far away. When no one showed up, Ben had relaxed a little —until the Seventies murder case flushed out a local cop who didn’t want old organized crime ties to come to light. 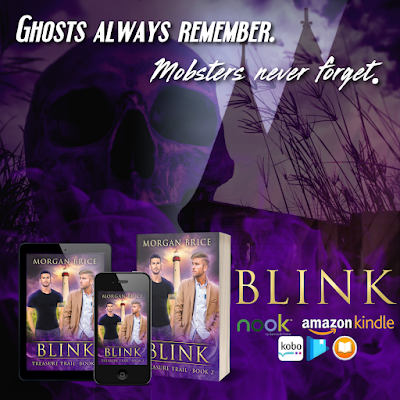 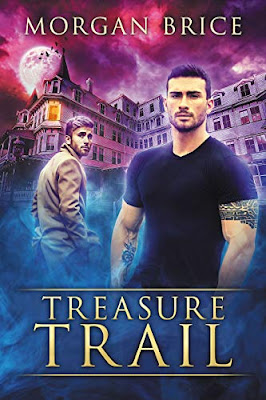 Treasure Trail: MM Supernatural Suspense
by Morgan Brice
June 26, 2019
Erik Mitchell traveled the world uncovering art fraud and relic theft, which pitted him against spoiled billionaires, unscrupulous collectors, mobsters, and cartels. He worked with law enforcement across the U.S. and Europe, but then a sting goes wrong, Erik ends up injured and returns to find his partner cheating. He decides to stop globetrotting and buy an antique shop in scenic Cape May, NJ, rebuild his life, and nurse his broken heart.

Undercover Newark cop Ben Nolan went down in a hail of bullets when a bust went sideways, after a tip-off from a traitor inside the department. When he recovers, he spends a couple of years as a private investigator, only to tire of seeing the worst of human nature. So when his aunt offers him the chance to take over her rental real estate business in Cape May, it seems too good to be true. Now if he could just believe he could ever be lucky again in love.

Sparks fly when Erik and Ben meet. But when a cursed hotel’s long-ago scandals resurface, the two men are pulled into a web of lies, danger, and deception that will test their bond—and might make them Cape May’s newest ghosts!

Treasure Trail contains sexually explicit material intended for adults 18 and over. This is book #1 in the Treasure Trail series.
Amazon-Universal Link-Goodreads

About the Author:
Facebook Group-BookBub
Pinterest (for Morgan and Gail)
Twitter: @MorganBriceBook
Newsletter-Instagram
Morgan Brice is the romance pen name of bestselling author Gail Z. Martin. Morgan writes urban fantasy male/male paranormal romance, with plenty of action, adventure and supernatural thrills to go with the happily ever after. Gail writes epic fantasy and urban fantasy, and together with co-author hubby Larry N. Martin, steampunk and comedic horror, all of which have less romance, more explosions. Characters from her Gail books make frequent appearances in secondary roles in her Morgan books, and vice versa.

Series include Witchbane, Badlands, Treasure Trail, Kings of the Mountain and Fox Hollow. Watch for more in these series, plus new series coming soon!
GIVEAWAY
You can also enter the giveaway on our Instagram post or click here for your chance to win an ecopy of your choice from Morgan or Gail's backlist!
a Rafflecopter giveaway