From a galaxy far, far away, Lucasfilm announces the discovery of the “last surviving copy” of THE JEDI PATH. 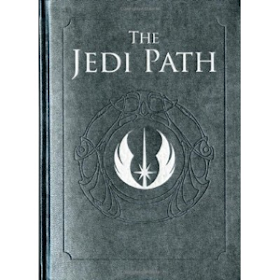 A very cool book is hitting stores this week. As a fan of Star Wars, when I heard about this latest edition I was geekin out! If you're a Jedi like me (or wanna be) I think this is going to interest

I have tons of info on this book so make sure to check it all out below!

Is the dark side getting you down? Fear not, Padawans, Jedi Knights, and STAR WARS™ fans. Now that the last surviving copy of THE JEDI PATH: A MANUAL FOR STUDENTS OF THE FORCE has been discovered, there will soon be balance in the Force.

A long time ago, in a galaxy far, far away… a group of ancient Jedi Masters painstakingly set out to define the roles and training practices within the Jedi Order. Just one copy of the venerable tome has survived throughout the centuries, passed from Jedi Masters to their Padawans—and annotated over the years by Yoda, Obi-Wan Kenobi, Anakin Skywalker, Count Dooku, and Luke Skywalker, among others.

"This is the first time a STAR WARS book has been treated as an actual artifact that originated in the STAR WARS universe. This thousand-year old textbook bears the handwritten notes of everyone from Yoda to Luke Skywalker, and it contains souvenirs including Qui-Gon's Padawan braid and a napkin from Dex's Diner," says Carol Roeder, director of publishing for Lucasfilm Ltd.

To heighten the drama of the revered text’s backstory, THE JEDI PATH Special Edition is housed within a sleek mechanical vault that opens with the touch of a button. Accompanied by light and authentic STAR WARS sounds, the book then rises on a platform within the vault.

The 160-page manual has a faux-leather cover featuring embossing and foil stamping, as well as eight removable mementoes tucked within its pages—including Obi-Wan Kenobi’s sketch of his lightsaber (scribbled on a napkin from Dex’s Diner) and the Padawan braid of Qui-Gon Jinn, which was cut off during his Knighting ceremony. The book’s elegant design showcases more than 150 original illustrations by acclaimed STAR WARS artists including Tommy Lee Edwards, Chris Trevas, and Terryl Whitlatch.

1) Get an insider's perspective: For the first time, Lucasfilm™ has authorized a book that comes from INSIDE the STAR WARS universe. This is the "last surviving copy" of a famous Jedi textbook that was all but eliminated following the Clone Wars.

2) STAR WARS artifacts: A metal Jedi credit, a cloth starfighter patch from the Jedi Aces, and a doodled-on napkin from Dex's Diner are among the treasures tuck within the books pages. 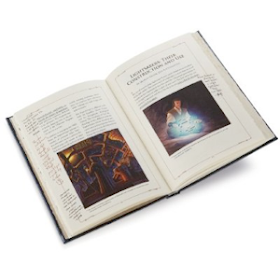 4) Qui-Gon's Padawan braid: The venerable Jedi Master placed his severed braid between pages of the book after becoming a Knight. Now it is yours.

5) Secrets never before revealed: Many creatures, characters, and starships have been created exclusively for THE JEDI PATH and are illustrated here for the first time.

6) What they don’t want you to know: The book, authentically aged, even has a section of missing pages where the Emperor tore out sensitive information. Sections that remain contai

niques, and the Sith warn of the seductive lure of the dark side

7) Wisdom of the Jedi: The book's text is written by seven all-new Jedi Masters, who put together this collection of teachings a thousand years before the events of the STAR WARS movies. In the movies the Jedi wear utility belts, but what do they keep in all those pouches? THE JEDI PATH provides a detailed look at Jedi field equipment.

8) Graffiti chains: In the book's margins you can follow the scrawled comments of the book's various owners, as an observation from Obi-Wan leads to a clarification by Anakin and a sarcastic follow-up from The Clone Wars' Ahsoka Tano.

10) The Jedi Trials: How does a Padawan become a Knight? For the first time the Jedi Trials are explained in detail. And now, the way to Ultimate achievement is revealed. Learn how you might attain the rank of Grand Master, the ultimate title with

in the Jedi Order.

See more about it at www.amazon.com/jedipath and there is also a cool Lucasfilm trailer there.