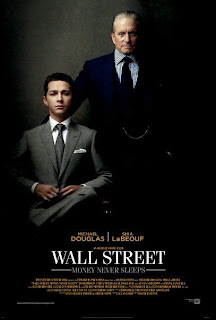 Wall Street, directed by Oliver Stone, stars Michael Douglas, Josh Brolin, Shia LaBeouf and Carey Mulligan. It hit theaters this weekend. Never one to miss a movie staring Michael Douglas, I made my way to the theater with my movie gal pal, Ceci. :)
Plot Summary:
The sequel to the 1987 popular movie, "Wall Street". This film follows the actions of a Wall Street trader Gordon Gekko after his release from prison. As the global economy teeters on the brink of disaster, a young Wall Street trader partners with disgraced former Wall Street corporate raider Gekko on a two-tiered mission: To alert the financial community to the coming doom, and to find out who was responsible for the death of the young trader's mentor.
This movie review for me is a little hard to write. Let me explain a bit. Something definitely felt off in the script. Ceci and I discussed this for at length after the movie but could not put our finger on exactly what the problem was. To quote her words "the whole thing just needed to be redone". I don't know if I agree with that 100% but I get where she was coming from. Something did not work out, there was a big lack of finesse missing. More smoothness needed maybe? Definitely tricky.
Okay, review time. Bling is one of the big themes in this movie. So much time was taken to show who was wearing what and what fancy shmacny place they got it from. Really? Ok if thats what you want to waste film footage on. Oh wait! Film makes big money on showing off corporate names...got it. No wonder Heineken and Ducati are mentioned so much as well. :P
As for the acting, it was decent. Carey can sure cry on cue, had that water faucet pouring a plenty. Almost became annoying IMO. Michael, Shia and Josh put forth the best performance they could, but it all seems to come back to that script. Not much you can do if its horribly lacking. Cinematography was done well enough, but focus felt more on the architecture around the actors and left me with a feeling of emotion detachment.
Overall, it's a bunch of bling-bling look at my ring and Wall Street mind games. As I myself am such a direct person and HATE being manipulated in any fashion. The whole back stabbing and cut throat business that is Big Money was a huge turn off in it's own right. So again, writing this review comes with mixed emotions for me. And seeing how I was just recently screwed out of some money by a cleaver con-artist, this movie hit very very close to home.
Gets 2 1/2 sheep from me and a big recommendation to miss the high theater ticket price and wait for the dvd.
KD