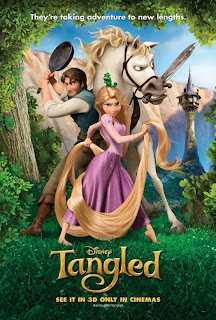 Disney's Tangled is in theaters now. It stars Mandy Moore as the voice of Rapunzel and Zachary Levi as Flynn Ryder. I was pretty excited to see this film, (I'm a fan of Disney. I love Ariel and Beauty and the Beast) so I grabbed my date and rushed out to the theater. I was...a little disappointed.
Plot:
After receiving the healing powers from a magical flower, the baby Princess Rapunzel is kidnapped from the palace in the middle of the night by Mother Gothel. Mother Gothel knows that the flower's magical powers are now growing within the golden hair of Rapunzel, and to stay young, she must lock Rapunzel in her hidden tower. Rapunzel is now a teenager and her hair has grown to a length of 70-feet. The beautiful Rapunzel has been in the tower her entire life, and she is curious of the outside world. One day, the bandit Flynn Ryder scales the tower and is taken captive by Rapunzel. Rapunzel strikes a deal with the charming thief to act as her guide to travel to the place where the floating lights come from that she has seen every year on her birthday. Rapunzel is about to have the most exciting and magnificent journey of her life.
Now with Mandy Moore playing the main character you can expect a few singing numbers. But man there just seemed to be a TON of singing. I love music (rocking out to Primus atm) but was this a musical or a movie? It was hard to tell. Aside from the constant singing, the movie is definitely geared toward the young girls. [3-11 age range] A little action thrown in for the boys but overall it's a chick flick. And to drive that point home my 4 and 1/2 year old date asked me two times "is it over yet?". lol
I need to also point out that while the movie gets a PG rating this was the first time I have EVER seen blood in a kids movie. It was like watching a prison yard shanking! It's a kids movie people! Do they need to see blood? I was just a little put off by that, I know Bambi was hard core sad. But you did NOT see all the blood of Bambi's Mom. Just saying be warned if you go with little ones. There was a lot of "mommy what is that?" in the theater when that happened.
Aside from all that, use good judgement with this one and decide for yourself and family before going. I had no heads up on this on. Had I known...I would have gone alone.
Getting 3 confused sheep. Baaaaa
KD