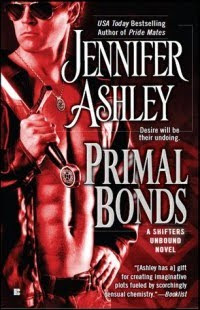 Primal Bonds, by author Jennifer Ashley, is the second book in her Paranormal/Romance series Shifters Unbound. First off I did NOT read book one, so I had no back story going into this one. Plus those of you that know me get that I am a 100% Vamp gal. I love them, I want to marry one and have little blood thirsty babies. lol I did clear my mind of all things Vamp for this fang free story. :) The things I do for the greater good I tell ya!
Storyline:

When half-Fae, half-Shifter Andrea Gray flees an abusive would-be mate, she heads to the Austin Shiftertown, but there's a catch. The only way she is allowed to relocate to the Shiftertown is if a Shifter there claims her as mate.

Sean Morrissey, the Guardian of his clan and all of Shiftertown, is mateless, lonely, and has a tough job--to send the souls of deceased Shifters into the afterworld. He volunteers to claim Andrea, sight unseen, but doesn't realize that one look at the gray-eyed, dark-haired beauty will stir the mating frenzy in him. Even though the mate-claim isn't finalized, official, or yet blessed, Sean will do anything to get Andrea into his life and keep her there, forever.

Primal Bonds does start out with a bang, quite literally, a shooting at the local bar has people running for cover. You are pretty much thrust right into the mayhem from page one, and the story continues to unfold from there. Andrea is a half-breed who has never fit in, picked on mercilessly by her own pack since childhood. She is finally forced to leave or get sucked into an unwanted mating with a jerk back home, so she flees and finds a safe haven in her Aunt Glory's pack in Austin.

Enter hottie with the naughty body Sean Morrissey, the sword wielding alpha-male with a heart of platinum. Sean is an easy character to love, humorous, with a giving and protective nature that wins you over from the start. Always wanting to do the right thing for his pack, the guy is just too cute for words. Carrying a weighty burden alone, he falls hard for the stubborn and strong willed Andrea from the start. Oh my my my does he sure have to chase her tail all around town. That little wolf is sly. ;)

The only thing that really bugged me about this story is the use of tracking collars on all the packs, apparently the government made this mandatory when they found out about the shifters. These collars cause them massive pain when the shifters get angered into fighting, which is usually a good thing. Fighting over nothing is bad. Unless you happen to be fighting for your life, the life of your pack and mate. Then yeah, the collars need to go. But the pack is working that out, so hopefully soon those will be gone.

I didn't care much for the side stories involving Andrea's Aunt Glory and Sean's dad Dylan. But maybe that's because I didn't have much past history to go on with them. Either way they seemed to pull me out of this story when things shifted to them.

Quiet a few plot twists and backstabbing turns that left me guessing until the end. I enjoyed this book for what it was, vamp free but a fun read. Well written and very entertaining. And men that do all the cooking, WINNING! lol. I will happily read the next book in her series and hope the fun continues.