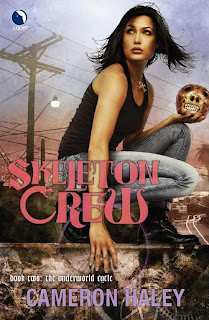 ***Our Guest Blogger Sharon recently read Skeleton Crew by author Cameron Haley, here is her review.***
This is a dark, gritty hard core Urban Fantasy. The world and characters take center stage. Most of the UF I read is heavy on the romance, but this one isn’t. There is a little bit of romance, but I didn’t miss it because I was having so much fun watching Domino and company kick demon and zombie (oh, yes, folks, there are zombies!) ass.
Blurb:
Bodies are hitting the pavement in L.A. like they always do, but this time they're getting right back up, death be damned. My mobbed-up outfit of magicians may be the strongest in the city, but even they aren't immune to the living dead.

And I've yet to develop a resistance to Adan Rashan.

If I don't team up with the boss's son, we won't just be at each other's throats over control of the outfit. We'll be craving hearts and brains, as well.

Because as long as this nasty spirit from the Between is stopping souls from finding peace, I'm facing the biggest supernatural crisis to ever hit the City of Angels.

Zombies, it's time you feared me.

I haven’t read the first book in the series (Mob Rules) and I think you should before reading this book. I was still able to enjoy Skeleton Crew, but information in the first book probably would have made this one easier to understand from the beginning. I will be reading the first one.
Our heroine, Domino, is kick-ass and smart mouthed mob sorceress. There is a hidden world that shadows our world where mobsters rule and their currency is magic. Different gangs fight over territory in an attempt to gain more magic. There are alliances and enemies, but you are hard put to find friends. Zombies are now walking and eating and Domino and her gang have to figure out why and how to stop them. This story is one violent action scene after another and filled with dry humor. It is a clever and imaginative world. The zombies aren’t like what you see in the movies as Domino finds out.

Someone who hasn’t read Mob Rules first would probably give this book a lower rating, but I am not going to dis this story, since it was my stupidity for not reading the first one. I still can recognize the world building genius Haley has created!
Example of Haley’s humor:
“Everyone has an irrational fear. For some people it’s spiders, for other it’s snakes, or maybe clowns. I have a big f@#!ing problem with zombies. I can deal with ghosts- even the really creepy ones. Hell, I share my condo with a spook, an old woman named Mrs. Dawson. I can also deal with dead bodies-as long as they stay down. If they get up and try to eat me, that’s just too f@#!ing much.”

A look into Domino’s head:“I’d done a lot of bad things in my life. I wasn’t an innocent. I didn’t dwell on it, I didn’t cry about it, but I knew there was evil inside me. Maybe it had always been there or maybe I’d had a choice somewhere along the line and I’d done it to myself. It didn’t matter-it was there all the same. I’d thought I could give my life some meaning, some purpose, by turning that darkness against a darkness greater still. I couldn’t change what I was but I could be the lesser of two evils. I could be the devil you know.
SS