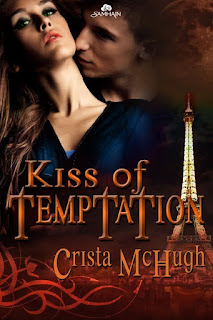 It takes a witch to outwit another witch, so when Daniela finds herself in the catacombs of Rome intent on retrieving the legendary Staff of Octavius, she’s prepared to wield her innate fire magic to claim the staff and keep it—and its overwhelming power—from getting into the wrong hands.
All her Foundation training, however, never prepared her for Luc.
One breath of her scent is enough to reawaken a thirst Luc hasn’t felt in six hundred years. It’s enough to make him almost forget his vow to keep the staff out of the wrong hands—and to never give in to his bloodlust. The moment he touches Daniela, the last shreds of his humanity revive with a violent fury and drive him to claim her…blood, body and soul.
He’s her enemy. He’s arrogant and infuriatingly secretive. And his kiss makes her want things she shouldn’t—like abandoning her mission to spend eternity in his arms. Crossing that line, though, could not only send them up in flames…it could condemn all mankind to hell on earth.
Product Warnings
Contains a smolderingly hot (literally!) witch, a sexy, brooding vampire, wild sex you want to sink your teeth into, and a sensually charged romance that spans several lifetimes.
Review:
Do you love the self-loathing, self-sacrificing vampire alpha-male? Then you will absolutely love Luc. He's a 600 year old vampire that refuses to drink blood from a human host. He has been able to resist the urge until he is forced to work with Daniela, a witch that works for the Kavanaugh Foundation. There is a connection they can’t explain or deny, although they try. This mutual attraction which they try to bury is what makes a fun PNR romance
The Foundation (made up of hunters and witches) is trying to stop Marcellus, a powerful vampire, from acquiring a magical artifact he needs to raise a vampire army. Head witch Morwen has sent her friend and fellow witch Daniela to find the Staff first. It is in the catacombs of Rome searching for the staff that our heroine meets Luc. These two characters have an intense and explosive connection that goes deeper than either can imagine. Daniela initially has no idea Luc is a vampire or of the history between him, Morwen and Marcellus. This secret past eventually leads to feelings of betrayal (another must-have for a fun PNR) when she does discover the truth.
The sexual tension between Daniela and the ex-priest (oh yeah) Luc is well done. I love this type of alpha-male: all arrogant and strong, but a mush ball in the presence of his mate. If you are looking for a quick vampire PNR fix, then give this one a try.
Crista McHugh is also the author of The Alchemy of Desire
3 vamp loving Sheep!
SS (edited by BAK)