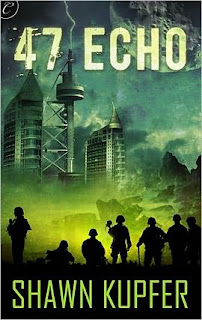 Today we meet with Shawn Kupfer, author of 47 Echo. Shawn was gracious enough to answer a few questions for us about his book and his inspiration to be an author. For all two of the people that read my posts I'm sure you'll be happy to hear from someone else today. Also there's a chance for prizes, so a bonus. Anyway, onward to the interview.

Ben: So welcome, Mr. Kupfer, to begin the interview how about you tell us how you came up with the idea for 47 Echo?
Shawn: About a year or two ago, I read that China had a standing army of nearly 4 million soldiers. I’d also heard the statistic (on British TV, from Top Gear presenter Jeremy Clarkson) that America had the largest number of its own citizens in prison, more than 2 million people. Then, much later, I saw an infographic on the Web that showed what each country led the world in. For America, it was number of people in prison. For North Korea, it was soldiers — there are more than 13 million of them there. Those numbers kind of started it all off for me.
Ben: Wow, 13 million? North Korea's such a tiny nation too, some truly sobering numbers.

Ben: What motivated you to become an author?
Shawn: Most likely the fact that I'm always making up stories in my head. That, combined with a lack of any other marketable skill...

Ben: In your “About the Author” it mentions that you grew up on military bases during your childhood. Did your experience growing up influence the subject matter you decided to write about?
Shawn: Yeah, to a large extent, growing up in the military kind of wired the way I think. We military brats never leave the service behind, whether we go into one of the Armed Forces or not (I ended up working for the Department of Defense, so there you go).
Katie: {hears talk of men in uniform and comes running to hunt down the man candy!}
Ben: No, no man candy. {pushes Katie outside and locks the door} This is my interview, now stay out. {grumble grumble, something about Vietnam}

Ben: 47 Echo is set in 2019, so as I like to say, ten minutes into the future. The main differences we see are hybrid cars and a whole bundle of shiny new military technology. Did you do a lot of research into developing technologies for your novel?
Shawn: A bit of research combined with some educated guesses and extrapolation. I figured that the hybrid power thing would be a must with the dwindling oil reserves, and the new technologies (the TotalVis goggles, UAVs, and omnipresent computing) are the way things are heading, in my opinion.

Ben: As we know from the beginning, Nick Morrow and his compatriots are all convicts pressed into service. Where did you get the idea for the convict battalions and do you think that's something that is likely to happen in the future?
Shawn: Really, it just came down to numbers. When facing such superior adversaries – 4 million in China (in wartime, probably three times that), 13 million in North Korea, and about half of the Russian Federation's god-awful huge amount of soldiers – we'd need to pull bodies quickly, and without worrying about tracking down draft-dodgers. To fill the ranks that fast, we'd grab the people who couldn't run first – the convicts. Then it would be a matter of tougher sentences for minor crimes until we had everyone we needed. And I sure hope that doesn't happen, but I don't think we're likely to pick a fight with China anytime soon... so we're probably safe there.
Ben: Agreed, I'd hate to see the fallout from such a war in real life.

Ben: 47 Echo specifically becomes an elite special operations unit, the first entirely made of convicts. Did any inspiration for their unit specifically come from The Dirty Dozen?
Shawn: You know, people keep mentioning that movie to me. I've never actually seen it. I suppose I have to one day.
Ben: It's a good film. I'd definitely recommend you check it out.

Ben: At one point in the novel we meet a character reading a copy of Robert Heinlein's Starship Troopers. Were you too a fan of Heinlein when you were younger? (It's okay to admit it, I was too.)
Shawn: Totally. The book's in there for a reason, though – it's been added to the curriculum at the Federal level.
Ben: Awesome, definitely an interesting book.

Ben: At the end of 47 Echo we get a few hints of future adventures for the 47 Echo team. Are we going to read more about our rag-tag team in the future, and if so when can we expect it to be out?
Shawn: One hopes. I'm doing edits on the sequel right now, with the hope that it'll be out the beginning of next year or thereabouts.

Ben: Do you have a favorite science fiction author?
Shawn: I have a bunch. William Gibson, Douglas Adams, and Frank Herbert probably round out the top three. Of course, that'll change given the day, but...

Ben: Do you have anything else to add before we leave?
Shawn: Thanks for having me! And folks, do feel free to shout at me anytime on Twitter (@Tweet_Book, where I write chunks of novels every night), and come say hi on the 47 Echo blog (http://47echo.wordpress.com).

Ben: And finally our much-expected rapid fire round. Just say the first thing when you're presented with the options.

Ben: Let's get the obligatory one out of the way: Coke or Pepsi?
Shawn: Pepsi. Specifically, Mexican Pepsi.
Ben: Olé. Take the vote down, Katie.

Ben: Chinese food or Tex-mex?
Shawn: We'll go Tex-Mex. I ate way too much Chinese food in college. One roommate I had was unable to cook anything but.

Ben: Gobstoppers or Hershey Kisses?
Shawn: Hershey Kisses, all the way. It's rare that I crave sweet stuff, but Hershey is always clutch.

Ben: Musketeer or Cavalier?
Shawn: Cavalier. As long as we ignore the horrible Chevrolet by the same name.
Ben: I was more thinking the European soldiers so we probably will be.

Ben: Goblins or Trolls?
Shawn: Can't it be both? Like Troll 2: Hobgoblin?
Ben: “They're eating her. And then they're going to eat me. Oh my goooooooooood.”

Ben: Anyway, a big thank you to Shawn for dropping by, and hopefully we'll see you when your next book comes out next year, hopefully.

Now, on to the contest. Shawn has graciously agreed to donate an ecopy of 47 Echo as a prize for one of our lucky readers. In addition we are throwing in some Sheep swag items! So, in the comments sections below leave a comment that includes:

1. Your e-mail address
2. A piece of future technology you'd love to have

A winner will be chosen on June 12th at midnight.
Followers of our blog will get double entries in this contest.

Another big thank you to Shawn and all our readers.