Reviewed by Dani Harper and Fiona the Pug 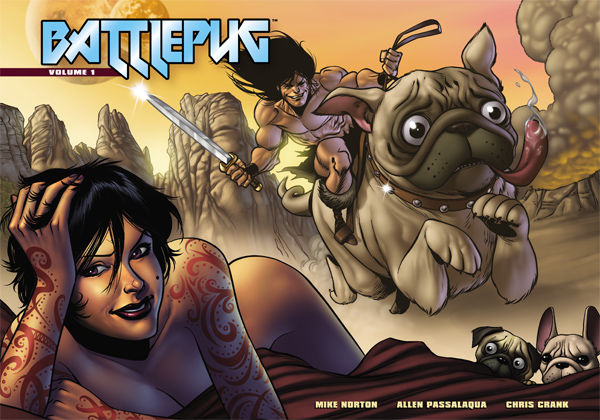 
The epic tale of blood and drool begins here! Join Molly and her dogs Mingo and Colfax, as she recounts the legend of "The Warrior and the Battlepug"—a tale of a fearless barbarian, his trusty and freakishly large pug, and evil baby harp seals. This volume collects the first year of Mike Norton’s Battlepug—the perfect opportunity to get in on the ground floor of the fan-favorite webcomic by Mike Norton, Allen Passalaqua, and Crank!
* By famed Runaways artist Mike Norton!
* Includes extras not seen on the website!
It’s a pugly job, but someone’s gotta do it!

DANI HARPER:  BLOOD AND DROOL is a collection of the first year of BATTLEPUG webcomics by writer and artist Mike Norton.
The concept in a nutshell is this:  Barbarian teams up with A Giant Pug.  Yup, just picture Conan riding a monstrous, snorting, wheezing, giant-of-a-squashy-faced-dog and you’ve got it.
FIONA THE PUG:  A VERY HANDSOME hunk of giant dog. *drool*

DANI HARPER:  The barbarian warrior is known only as “The Kinmundian”, and he is the sole survivor of his tribe. He lives for revenge, he has plenty of wrath to spare and a permanent frown. This makes him the perfect straight man for the comical giant pug. The pug doesn’t intend to be comical by the way – he’s loyal, loving and accidently handy in a fight – but his appearance does it all. Even a rainbow-farting unicorn couldn’t make a better foil for the grim-faced Kinmundian warrior.
FIONA THE PUG:  I agree with the loyal and loving part. But you forgot brave. Plus I think the pug adds immeasurable dignity to the story, and I resent your unicorn remark. Just see what happens to your shoes later… 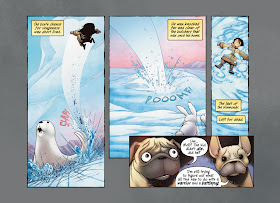 DANI HARPER:  *making a mental note to move all footwear to higher ground* The story itself is one bizarre surprise after another but still manages to have a plot. It begins with evil baby seals, and the truth about Santa Claus, and just keeps on delivering. Of course, a barbarian and a giant pug can’t help but attract pals, and the secondary characters are great. “Scribbly”, an old man whose sanity is questionable yet seems to have more common sense than the rest, keeps the story rolling along nicely by filling in details. Somebody has to – after all, the pug doesn’t talk and The Kinmundian is a man of few words. (BTW, the pug isn’t completely silent. It delivers epic lines such as "Snort! Snort! Wheeze!", which are common to the entire pug race.)
FIONA THE PUG:  *to herself* If only you knew what that really meant…

DANI HARPER:  The BATTLEPUG saga is presented as a bedtime story told by the voluptuous Molly. The narrator is naked except for her henna tattoos, although she does manage to keep her best assets coyly hidden. Moll has an audience of exactly two – Mingo and Colfax. Mingo is an adorable but not too bright pug of normal size and Colfax is a cranky French bulldog. (Obviously Mike Norton has a fixation on squashy-faced little dogs – something I understand completely as I’m owned by two pugs myself.)
FIONA THE PUG:  Actually you’re owned by me. I have paperwork to prove it. We just let Toby THINK he owns you too. 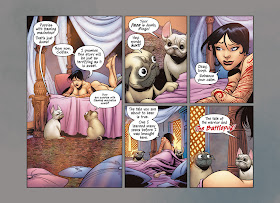 DANI HARPER:  Being dogs, Mingo and Colfax are completely immune to Moll’s curvy appeal but 12-year-old boys may have trouble turning the page. (Note to 12-year-old boys – Moll and her canine pals break into the BATTLEPUG story from time to time so it’s worth moving past the beginning.) At first I wondered if this story-telling vehicle was necessary, but quickly realized a nude narrator adds to the delightfully campy atmosphere. Moll’s sensuality and occasional innuendo is absurd in its own right, plus Mingo and Colfax squabble like kids and deliver some terrifically silly lines.
FIONA THE PUG:  Colfax keeps being mean to Mingo. Pugs are very sensitive creatures. Molly should give Colfax a time-out for the rest of the story.

DANI HARPER:  Writer and artist Mike Norton has been working in comics for over ten years, and his artwork has become well-known. Currently he’s been reunited with longtime comic book creator Sean McKeever to draw Marvel’s Fear Itself: Youth in Revolt. McKeever says “Mike and I have collaborated on over 400 pages of comics together…. Aside from being a great friend, he’s far and away my favorite artist to work with. He brings such a wonderful mix of energy and emotion to the page that he makes me look good.”  (For the rest of this article written by Ben Morse, go to: link)
FIONA THE PUG:  I agree, Norton is totally talented. Have you SEEN the cute butt on that giant pug?

DANI HARPER:  The artwork of BATTLEPUG is top of the line. Beautifully detailed and wonderfully colored. (BTW - The color artist is Allan Passalaqua, who works for DC and Marvel – there’s only about 40 people in the US who can do what he does! Here’s a link to an interview with Passalaqua explaining his craft and talking about comics he’s worked on
The panel layout of BATTLEPUG offers a lot of visual variety too – there’s nothing stiff or old-school about this comic. The lettering is easy to read, with the narrator boxes and dialogue bubbles well placed. I had no trouble following it.
FIONA THE PUG:  Everyone needs a daily dose of pugly heroism. To get yours online, go here –  http://battlepug.com/   BUT, don't you dare miss reading the pug-oriented blog below it, which publishes reader pics of their pugs. You’re sending mine in, right?

DANI HARPER:  Er, absolutely.  So, Mike Norton is a heckuva busy guy and he has also has non-pug blog. Plus he co-hosts a weekly podcast with his pal Chris Crank, who does all the excellent lettering in BATTLEPUG. Norton calls it “sort of a comic book show”, and both have mentioned that it sounds better if you’re drunk.
And for fans of BATTLEPUG, the coolest t-shirt EVER is available here 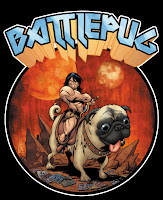 FIONA THE PUG:  Does it come in pug size? Because I absolutely want one. I want Toby to have one too so I can look at the giant heroic pug as well as wear it – hey, doesn’t this hunky pug have a name?
DANI HARPER:  Not in Volume 1. Maybe we find out later?
FIONA THE PUG:  Hope so. You’re buying me a copy, right? And I don’t want to share with Toby because he’ll lick it and get it all slobbery.

DANI HARPER:  Okay, okay, everybody gets their own – sheesh!  Anyway, with so much going for it, it’s no wonder that the BATTLEPUG web comic has been nominated for an Eisner award (Results will be announced Friday, July 13 at Comic-Con International) As for a rating, Fiona and I argued quite a bit.
FIONA THE PUG:  It has a PUG – that’s an automatic five!

Special thanks to our guest reviewer!
Dani Harper is a paranormal romance author. Fiona the Pug is her executive secretary. www.daniharper.com