Book Review: The Thing Down the Road by T.L. Smith 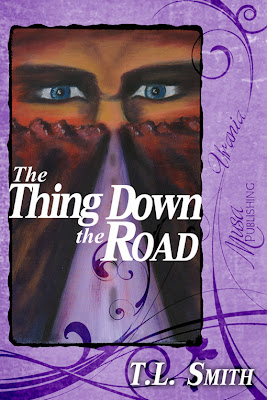 The Thing Down the Road by T.L. Smith

Beware of road-side freak shows! You never know what you’ll discover, or do, on the other side of the glass. You might go too far to ever return home.

Del detested these roadside displays of hapless creatures, mangled by fate or bad DNA, but it’s the only way to quiet his restless children. They stop to see “The Thing”, but what he discovers in this cage exceeds his expectations as a Xeno-biologist. Del rescues the creature and is taken on a harrowing tale of the lengths a man could go to, out of love, compassion, and insanity. He befriends this strangely charismatic captive, and sympathizes with the captive’s motives, fears, and final act of humanity.

This is a science fiction short story with a dark edge to it (this is a euphemism for horror for those who are afraid of that genre <G>). It took me by complete surprise. It has a deep message about human nature and makes you think what you would do in the same situation. There is one big OMG moment when you realize you made an assumption that wasn't what you thought. Yes, I am being vague because this realization is important to the meaning of the story. I didn't see it coming and that alone makes this story a winner. Not only is it a good story it is well written and I would be willing to read more by T.L. Smith.

The story is written in the first person POV of Del, a government agent for the CWS. He is on vacation with his family and finds an illegally kept creature as a road side attraction. The agency helps Del rescue the creature and the rest of the story is about how they become friends and learn to trust each other. Del desperately wants to help the creature come to terms with what happened all those years he was held captive, but some things can never be forgotten and some deeds can never be forgiven. There is a bitter sweet ending, but it is appropriate for the story.

This is a story of compassion and friendship and how on the inside we are all the same. This story is worth a read.


website
“The cure for boredom is curiosity. There is no cure for curiosity.” Ellen Parr or Dorothy Parker

T.L. Smith was born in Louisiana, but by the time she enlisted in the U. S. Air Force, she listed over 20 different residences on her security clearance. A stint in the military didn't cure Terry's wanderlust, not when there were still so many places to see. Not when her imagination carried her beyond our little blue planet.

She credits her brother for her addiction to Science Fiction. As a teenager Terry was introduced to The Hobbit, which led to The Lord of the Rings. It was her gateway drug that led to his coveted Sci-Fi library, which was never safe again.

The military introduced Terry to electronics and radars, chasing jet fighters across deserts and over mountaintops, training pilots to not get shot down in real-world combat. Sometimes dodging the occasional bad target drop of a bomb, rattlesnakes and jumping cactus. The military taught her to appreciate the military world, the technology and people behind so many 'fictions' she'd read. Now Terry strives to use those experience to give life to her characters as they reach out to the stars that we still yearn to touch.