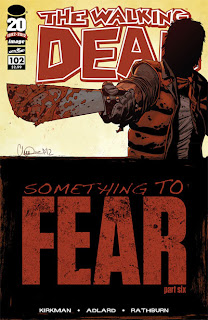 Previously in #101 Something to Fear Part Five:
Following Glenn's death (yes...I said that right), Rick and the rest of his group bring the body to be buried at the Hilltop. While Maggie and Sophia stay behind to pursue a better life, Jesus joins Rick, hoping to learn more about Negan. But when they return to Alexandria, they discover that Andrea has successfully repelled a Savior attack on the town...and taken a prisoner.

First and Foremost I believe we need to take a moment of silence in remembrance of a dear friend we lost to a brutal act of violence. Glenn, our dear friend, has been there through thick and thin and was always there to be walker bait in a time of need. Glenn was selfless, great friend, would have surely made a great father to him and Maggie's child; he stepped up to care for Sophia and proved he's a loyal companion. With that said- rest in peace Glenn, for now you are free of the daily suffering and free of being walker bait. May your piece of heaven be zombie-free dear friend. 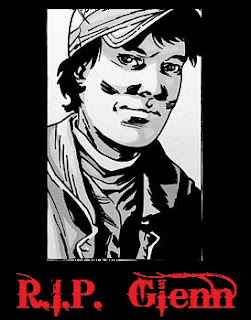 In book #102 we're starting to deal with the aftermath of Glenn being murdered by Negan, the rest of the community is just now finding out and we're seeing how folks are dealing with his death. Which we see the original group is having the hardest of times, especially Rick, since Rick feels like he has to protect everyone. Rick is not taking the death very well and Glenn's death leads them to the realization that they possibly cannot take on The Saviors and that they must fold and give in to the Savior's demands (which is they expect 50% of food/ammo/etc that the group has on a weekly kind of basis).

The community does not like the idea of just giving up, letting the hostage go, and giving into their demands but I think we've all come to know Rick well enough to know there's other intentions behind this. With Eugene possibly being able to make ammo and Jesus from Hilltop going all sleuth on the Saviors, there's clearly something cooking here that Rick is being secretive to the others about and I can't wait to see how it'll unfold.