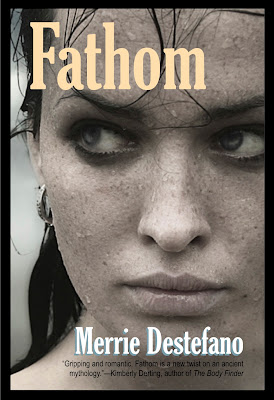 Turning sixteen can be hell, especially if everyone in town thinks your mother killed herself and your sister. All Kira Callahan wants to do is swim, hang out with her best friend, Sean, and ignore the kids who torment her at school. That is, until one day when she gets invited to a party. For three minutes her life is wonderful—she even kisses Sean. Then somebody spikes her drink and some girls from out of town lure her into the ocean and hold her underwater.

Kira soon discovers that the group of wild teenagers who have come to visit Crescent Moon Bay are not as innocent as they seem. In fact, nothing is as it seems—not the mysterious deaths of her sister or her mother, not her heritage, not even her best friend. And everything seems to hinge on the ancient Celtic legends that her mother used to tell her as a child.


Fathom is Merrie’s first foray into the young adult genre. I have read both her adult books, Afterlife and Feast, and loved them. You can find my reviews here and here. Merrie has a certain style of writing that sets her apart from other writers. Her prose has a rich dream like feel with dark undertones. I was glad to see she continues this style in her Y.A.

There is mystery and suspense, like you would find in a ghost story, and a monster, but I really can’t talk about the plot without giving away the many secrets Kira discovers about her past and future. I liked Kira’s character; she lives in a small town with the stigma of what her mother did, but with a loving father and grandmother she manages to be a pretty normal teenager. The romance is sweet and more about being a best friend, trusting one another and first kisses. There are two boys vying for Kira’s affections but by the end of the story she makes a choice which is something not often seen in YA series.

YA covers a broad age group; some YA stories aren't for the middle school group (11-13) but this story definitely would be. I think it would be a refreshing and exciting tale mixing Irish mythology with a little bit of horror for them without having too much of the teenage angsty overkill. Of course older kids, like myself, will enjoy it too.

You should give Merrie a try if you haven’t already. Like I said earlier, her writing style is a nice change of pace from mainstream YA and more of an experience than just a book you read.

I Smell Sheep is part of Merrie's Fathom blog tour and you can read her interview here.