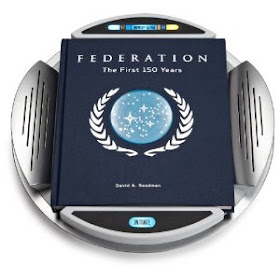 Assembled as a Special Exhibit on Memory Alpha, Star Trek Federation: The First 150 Years celebrates the 150th anniversary of the founding of the United Federation of Planets.

This unprecedented illustrated volume chronicles the pivotal era leading up to Humankind's First Contact with Vulcan in 2063, the Romulan War in 2156, the creation of the Federation in 2161, and the first 150 years of the intergalactic democracy up until the year 2311. Meticulously researched, this account covers a multitude of alien species, decisive battles, and the technology that made the Age of Exploration possible. It includes field sketches, illustrations, and reproductions of historic pieces of art from across the Galaxy, along with over fifty excerpts from key Federation documents and correspondence, Starfleet records, and intergalactic intelligence.

Housed in a pedestal display complete with lights and an audio introduction by Admiral Hikaru Sulu, this edition also features five removable documents from the Federation Archives, including Zefram Cochrane's early sketch of the warp-drive engine, a handwritten letter from young Jim Kirk, and the first-known diagram of a Trill symbiont.

One of the first TV shows I can remember, certainly one of the shows I cherish most from my childhood, is the original Star Trek series. Then, in the late eighties, when I caught my first glimpse of Star Trek: The Next Generation, my love for the show was rekindled. Beyond that, however, my inner fanboy has faded. I never became a "trekker" or "trekkie" or whatever it is the most ardent fans call themselves. The idea of becoming a collector of all things Trek never appealed to me. That said, there have been times ...

I dare say Federation: The First 150 Years was created to appeal to the completists out there, particularly the fans who have followed the franchise over the decades. The book essentially chronicles the early years of humanity's climb into the cosmos within the Star Trek universe, and it's inevitable seat at the head of the intergalactic table.

Unlike a fan's guide to the show, however, the book is presented as if it exists within the Star Trek universe, almost like a historical textbook. It's with that approach that the book falls a little flat with me. Oh, there's a ton of information collected in this book's pages, and the attention to detail is remarkable. I'm just not the kind of guy who gravitates towards books and shows that chronicle a fictional universe as if they are part of that universe. Like, if there was a documentary about Ian Fleming's James Bond franchise, but it was produced as if it was actually investigating the British secret service, I would considerably less interested. 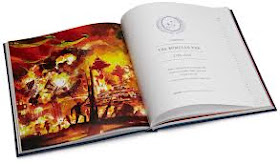 If, however, you don't have an aversion to this kind of immersion, then the book is bound to entertain. The Federation is captured and presented with a myriad of pictures, sketches, newspaper clippings, communiques, and other "official" documents to give a contextualized understanding of what the Federation of Planets actually was and what it's intentions were. Anyone who has seen the shows or watched the movies can probably recite the opening "These are the voyages ..." schtick, but the motivations behind it are put on full display in this book.

Casual fans hoping for a some Kirk and Spock biographies may walk away disappointed, as the focus really is on the Federation. In fact, because it's the first 150 years that the book focuses on, there's probably more references to the ill-fated show Enterprise than the original series. There is some new--at least new to me--back story regarding James T. Kirk and Spock in the latter half of the book, but the iconic characters are treating as facets of history, rather than the focus.

The package as a whole makes quite the collector's item, though I think you have to be a collector to actually warrant buying it. Fairweather fans and casual fans would likely settle on a Dummie's Guide, assuming there is one dedicated to the franchise. Still, dedicated fans are probably going to enjoy poring over this compendium. Personally, I'm interested to see how the next 150 years might be presented, as the franchise pretty much exploded with The Next Generation, Deep Space Nine, and Voyager all happening basically within the same decade. Heck, that decade alone in the franchise's timeline would be a huge book to put together. For now, nostalgia has its hands full with this book. 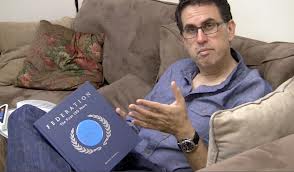 About the Author:
David A. Goodman has spent the last 24 years writing for television. His credits include The Golden Girls, Star Trek: Enterprise, Futurama (where he wrote the Nebula Award nominated Star Trek homage "Where No Fan Has Gone Before"), and Family Guy where he was head writer for six years. This is his first book. He lives in Pacific Palisades, CA with his family.