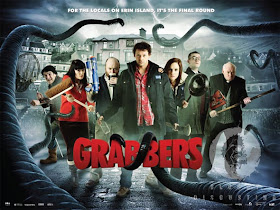 When an island off the coast of Ireland is invaded by bloodsucking aliens, the heroes discover that getting drunk is the only way to survive.

When I heard the premise of the new Movie Grabbers about a monster terrorizing an island off the west coast of Ireland, I nearly had a gromit. And I spent a blissful hour and a half on the island of Erin along with its residents as they battled a new life form that appears out of the sea.

Starring Richard Coyle (Human Traffic, Coupling), Ruth Bradley (Primeval, Doctor Who), Russell Tovey (Being Human, Doctor Who) and Bronagh Gallagher (The Commitments, Star Wars Phantom Menace), Grabbers is the first Irish monster movie and it doesn’t disappoint. What makes this movie so magical is the way it cleverly blends the Irish humour with monsters to create a sort of Father Ted meets Tremors movie. Usually Irish characters can come off as stereotypes and mockeries of the world but not so here. 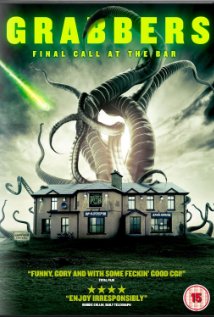 Writer Kevin Lehane does a fantastic job of nailing the Irish humour with great characters that you fall in love with straight away. From Paddy (the star of the show for me), a fisherman who loves drink and finds the first monster and who holds the key to defeating them, to pub owners Brian (who has one of the best scenes in the movie involving a water pistol and a lot of drink and his wife Una (Gallagher) who thinks the monster assault is her surprise birthday party, Father Potts who doesn't fall quite as far as Father Jack on Craggy Island but you know he could, to Doctor Smith (Tovey) who strangely seems out of place here but portrays the actual only stereotype as an all-knowing, very posh English scientist trying to discover what this creature is and refusing to let Paddy name it since he found it. Coyle and Bradley are Garda officers O’Shea and Nolan respectively, trying to solve the mystery. They share some of the movie’s nicest human moments. O’Shea is a heavy drinker but has a good reason and it becomes key to his saving the island. Coyle could have easily let this slip into farce but you end up feeling for him and wanting him to get together with Nolan. Nolan is the good girl officer who doesn’t drink and ends up pie-faced. Even Dr Smith (a sly Doctor Who reference perhaps, given Tovey was rumoured to take over from David Tennant) gets in on the alcohol action with hilarious results. Ruth is completely different here to her characters of both Molly O’Sullivan, the first Irish companion in the Big Finish Doctor Who stories and Emily, the feisty Victorian lady in Primeval. She has a guarded innocence here, a lady that goes by the book until she has to get drunk to find out how much blood alcohol it takes to kill a Grabber. Problem is, she doesn't drink alcohol and the results are hilarious, especially in the church scene where they have to convince a skeptical crowd that they have to attend a lock in at the pub, something they are reluctant to do until they hear the drink is free. 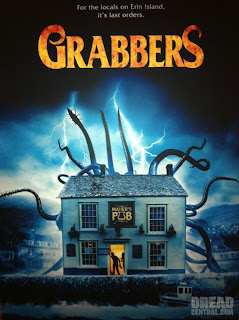 You may have noticed that drink has featured a lot in the past few sentences. Well, that’s the crux of the movie and a brilliant idea that sticks its two fingers up to the rest of the world’s view that all Irish people are drunkards. If a sea monster invaded the land then trust them to end up on Irish shores where alcohol can kill them. And who better to fight giant mutant squid monsters allergic to alcohol than a crowd of Irish people pissed as farts? Brilliant idea, brilliantly conceived and played out in deadly seriousness sprinkled with little moments of true Irish craic and humour.

That’s not to say there isn't dark horror here; there is. From the opening scene of an unseen monster murdering a boat full of fishermen to the unfortunate Tadhg and Irene Murphy who answer the door to more than they bargained for and the tense beach scene where the monster attacks O’Shea and Nolan, the script bounces beautifully between humour and horror. The monster dangles an unlucky islander at the front door of the Murphys and Irene asks what he wants. Tadhg replies, ‘A dance, I think.’

The titular Grabbers are very well done and the effects are second to none. Paddy’s run in with them is particularly well done as is the final siege at the pub.

All round this is a movie we should be proud of; it does for Ireland what Tremors did for underground worm monsters; puts us right out there. Great layered performances that make you feel like you actually know these people, a cool story that rattles along nicely and afterwards you’ll want a pint – just in case you meet a Grabber on the way home.