Movie Review: The Amazing Adventures of the Living Corpse (Another Hole in the Head Film Festival) 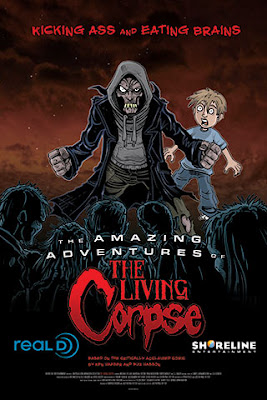 A somewhat self-aware zombie takes it upon himself to keep the rest of the walking dead at bay.

Based on the Dynamite Publishing comic series 'The Living Corpse: Exhumed, 'The Living Corpse is a rotting mass of bone and tissue. Moldy clothes hang on the ghastly frame of this impossible visage of death. Gnarled teeth gnash on a dinner of brains and blood - nutrition for what by all accounts is your typical 'zombie'. But this monster is different than your typical mindless, corpse- devouring skeletons. This monster has a soul.

Through monasteries and churches long forgotten and tunnels and catacombs never seen by mortal man, The Living Corpse searches for clues to the whereabouts of his son, Taylor, the only survivor of a zombie attack led by The Living Corpse himself.

Decades pass as The Living Corpse becomes a tool of the underworld, dispatching all manners of horrible creatures in all corners of the globe while constantly keeping up hope that his child is out there, somewhere in the terrible world. Will he find his son? Will his son forgive him? What price will be paid? All will be answered as we watch The Amazing Adventures of The Living Corpse!

I wasn’t sure I would enjoy this movie at first, because it is a computer-generated film and the graphics look like a second-rate video game. It didn’t take me to long to get past that and appreciate the graphic novel feel the movie captured. What really hooked me was the voice acting of the Corpse and the use of music to set the mood. Corpse is a guilt-ridden zombie trying desperately to find his son, while at the same time fighting his own battle not to give into the monster he has become. I was amazed at the depth of emotion they were able to achieve. The rest of the characters didn't have this effect on me though, and I found the story a little hard to follow sometimes. It also got bogged down with endless scenes of Corpse dispatching evil creatures. I think the movie would have moved at a better pace if it had been shorter.

If you enjoy graphic novels in general, then you will definitely want to check this movie out. There is a little humor, but this is an action/horror drama with a bittersweet ending. Corpse is a great tormented protagonist that walks a thin line between who he was and what he has become.