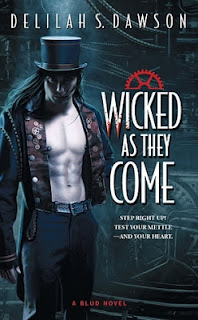 Wicked as They Come, by Delilah Dawson, is the first novel in her PNR series Blud. It's a fun mix of Steampunk, magic, and vampires all set to the pace of a side show circus! It's a fantasy novel for sure on a much bigger scale than most PNR's, and is a great start to a series I want to read more about!

Plot:
When Tish Everett forces open the ruby locket she finds at an estate sale, she has no idea that a deliciously rakish Bludman has cast a spell just for her. She wakes up in a surreal world, where Criminy Stain, the dashing proprietor of a magical traveling circus, curiously awaits. At Criminy’s electric touch, Tish glimpses a tantalizing future, but she also foresees her ultimate doom.

Before she can decide whether to risk her fate with the charming daredevil, the locket disappears, and with it, her only chance to return home. Tish and Criminy battle roaring sea monsters and thundering bludmares, vengeful ghosts and crooked Coppers in a treacherous race to recover the necklace from the evil Blud-hating Magistrate. But if they succeed, will Tish forsake her fanged suitor and return to her normal life, or will she take a chance on an unpredictable but dangerous destiny with the Bludman she’s coming to love?

If I had to sum this story up in one word it would be vivid. Dawson does a superb job creating an absolutely bright and vivid world. It's beaming with color and moving off the pages into real life. Her writing style is fluid when it comes to setting a stage and not even the smallest detail is overlooked. Corsets, top hats, and big frilly dresses abounded and I loved all the costumes! In a world run by blood thirsty animals and vampires galore, you'd expect to see the darker side to life in this parallel reality, but the beauty in the darkness is what shines through. The clockwork mechanics help seal the final rivet in this tale with that added bit of magic and mystery.

Our lead pair, Tish and Criminy, are total opposites but complement each other at the same time. However I felt that there seemed to be a lack of romantic connection between our leading pair for most of the story. Criminy falls head over heels from the first time they meet but I didn't really buy that part of his character; the pair seemed more like a friendly couple out on an adventure! I did however have a deep connection with Tish and her past struggles which lead up to where she is mentally and the fears that are holding her back. Maybe this is why I can overlook the romance part more, but really I am hoping for a lot better as this series progresses! I want passion and devotion and you can't sell me one without the other!

I wanted to love this book more than I did. I thought that maybe it was a tad too redundant in areas, but not to the point of overkill on the plot-line. As I stated though, there is a lot to like and I am totally willing to give this author and her series another try. There's adventure, mystery, magick, and fun to be had here for sure and while the believability of the time travel was a little too far-fetched for me, I ended up really liking the drama of it all by the end.