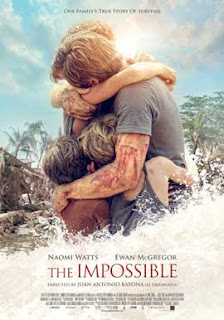 The Impossible (12a)
Directed by: Juan Antonio Bayona

A family vacation takes a catastrophic turn for the worst as the family find themselves in the grips of the 2004 Boxing Day tsunami.

Basking in the idyllic surroundings of Thailand after a happy Christmas day, the winter vacation of Maria, Henry and their three sons could not be more perfect. It does indeed seem impossible that such a picturesque scene could be broken by such a devastating turn of events, but broken it is.

Based on a true story, The Impossible reconstructs the events of the 2004 Boxing Day tsunami which destroyed huge parts of coastline and wiped out inhabitants. In terms of its depiction of the disaster, The Impossible certainly paints a graphic and heart-rending picture. In the blink of an eye, the lives of the family are changed forever.

The graphics go some way to representing the terror of the tsunami with long shots of the wave giving an indication of the scale of the catastrophe. However, unlike so many other new movies focusing large-scale disasters, The Impossible doesn’t rely on special effects. The quality of the acting shines through with both Ewan McGregor and Naomi Watts (who play Henry and Maria) providing convincing and moving performances. Their desperation and despair at the family’s separation following the tsunami evoke nothing less than the audience’s worst nightmares.

Much of the film is uncomfortable to watch. We witness the gore of Maria’s torn open arm. Underwater shots allow us to see the struggles of the victims as the wave hits land. The film doesn’t sugar-coat the horrific events but there is a sense that the film has been tailored to suit a Western audience. The family is not indigenous to the area but is in fact British and there’s a feeling that many of the scenes have been constructed solely to achieve maximum tear-jerking effect.

Nevertheless, the film does provide a thought-provoking symbol of the fragility of life. Maria and Henry’s son, Lucas, once a spoilt and awkward boy, shows his heroism as he attempts to save other families as well as his own. We are reminded that this type of film could only ever provide a snapshot of the events of Boxing Day 2004. The horrors faced by the family are representative of the many thousands of other families affected by the tsunami. A gripping and vivid viewing experience, the film succeeds in providing a poignant reminder of the destructive power of nature.

4 out of 5 Sheep
Reviewed By: Emma Carey from Following the Nerd