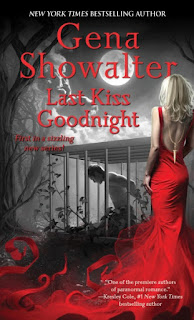 Last Kiss Goodnight: An Otherworld Assassin Novel, by Gena Showalter is a thrilling new paranormal series with a breathtaking tale of a warrior enslaved by desire and the woman who frees his soul. This novel presents a darker side to Showalter this time around and while the plot was different than what I've come to expect, I did enjoy the story and the new saga that's unfolding.

Black ops agent Solomon Judah awakens caged and bound in a twisted zoo where otherworlders are the main attraction. Vika Lukas, the owner’s daughter, is tasked with Solo’s care and feeding. The monster inside him yearns to kill her on sight, even though she holds the key to his escape. But the human side of him realizes the beautiful deaf girl is more than she seems—she’s his.

Vika endures the captives’ taunts and loathing, hoping to keep them alive even if she can’t free them. Only, Solo is different— he protects her. But as hostility turns to forbidden romance, his feelings for her will be used against him . . . and he’ll be put to a killer test.

When writers go through life changing events sometimes those events manifest in their stories. I'm not personally aware of all the little details in Gena's life but I know she's at a place where she is opening herself up to new ideas, new ways of thinking, and new ways of sharing. That being said, Gena has taken a slight turn from what fans of her series may have expected. Last Kiss Goodnight is heavy on the dialog and lighter on the romance and while I don't read romance novels for just the "romance" bits, I did expect a bit more heat mixed with action and adventure.

The story starts out very well; we meet a young woman who's being horribly abused by her father who's a circus owner. He's a cruel man with some serious devilish issues, maybe Dr. Phil will have some good luck with this one. Daddy's life is NOT working out but he doesn't care and will beat the crap out of anyone that says different. Vika and her animal friends are trapped in this desperate situation and we find that her daddy dearest is making use of new animals for his sick and twisted sideshow called Otherworlds, made up of various group of immortals with fantastical talents and unique personalities.

Solomon is our leading male who's been captured and locked in a cage, forced to endure the most hideous of acts or face execution. It's pretty sick stuff but it's not grotesque to the point of being unbearable to read. There's some major bible themes going on with the story and while I enjoy the good vs evil, I did feel like the story became majorly focused at times to the point preaching.

As the romance between our pair heats up, the story becomes very tender. The passion between the two is kept at a slow burn and never really lifts off from that point. It wasn't really a let-down, but definitely not what I expected from a writer known for her character passion. There's a lot of give and take and countless times where an easy answer is found and any dramatic build up is pretty much quickly defused.

Regardless of all the nit picking, the story itself was enjoyable and diverse. Definitely different and dark compared to her other books, but wonderful in its complex darkness. Greed and compassion are major players this time around and written in a very elegant way.

To date, the Lord of the Underworld series has been the most rewarding series I have read and Showalter is one of the best writers on the shelf today. This new saga may not be for everyone, but I was glad I gave this unique world a try. I look forward to reading the next edition and seeing where the saga leads next!