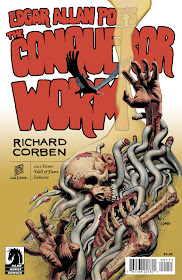 A horrifying adaptation of Edgar Allan Poe’s classic by comics legend, Richard Corben. A betrayed man hunts down his wife and her lover only to stumble upon a gruesome puppet show based on his life.


“That the play is the tragedy, “Man,”
And its hero the Conqueror Worm.”
~Edgar Allan Poe


When it was seen that Poe mentioned puppets in his poem, “The Conqueror Worm,” the comic artist went to work sketching puppet ideas for this adaption. Suddenly, this comic is set in what appears to be the Old West, where we meet a man chasing down his cheating wife with her lover, who also happens to be his cousin. After killing both, he stumbles upon the carcass of a man being devoured by strange worms he has never seen before. It is at this time two people approach him, with an offer to see a play of ‘hopes and fears.’ Which he takes his relatives too, getting more then they all bargain for. 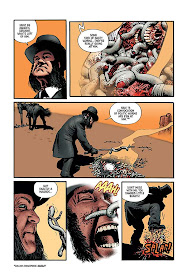 With visions of skeletons, skulls, turkey vultures (in place of condors mentioned in Poe’s poem), and puppets, the comic art is properly Poeish in nature. It brings to mind, that much of Poe’s written work is surreal and more of terror psychologically, words dreams brought to flesh—including conqueror worms—by the brush of artwork.

I give this 5 sheep, and hope more of Poe’s work is adapted like this.