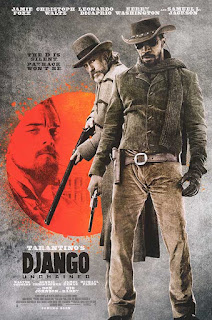 Django Unchained, written and directed by Quentin Tarantino, stars Jamie Fox, Christoph Waltz, Leonardo DiCaprio, Samuel L. Jackson, and Don Johnson. If you like a good punch to the gut, repeatedly, and you know and love Tarantino films then this is one to see!

Plot:
Set in the South two years before the Civil War, Django Unchained stars Jamie Foxx as Django, a slave whose brutal history with his former owners lands him face-to-face with German-born bounty hunter Dr. King Schultz (Christoph Waltz). Schultz is on the trail of the murderous Brittle brothers, and only Django can lead him to his bounty. Honing vital hunting skills, Django remains focused on one goal: finding and rescuing Broomhilda (Kerry Washington), the wife he lost to the slave trade long ago. Django and Schultz's search ultimately leads them to Calvin Candie (Leonardo DiCaprio), the proprietor of "Candyland," an infamous plantation. Exploring the compound under false pretenses, Django and Schultz arouse the suspicion of Stephen (Samuel L. Jackson), Candie's trusted house slave.

I don't think to date I've walked out of a film feeling sick to my stomach yet oddly fulfilled at the same time. It was such a mix of emotions rocketing thru my veins that I truly was left shell shocked, and might still be. The subject matter that is the film's heart, slavery, was one that I think everyone should know and see. This is a dark and ugly past, but a past nonetheless and if we're to learn from our past to prevent the same mistakes, then so be it. Message received loud and clear! 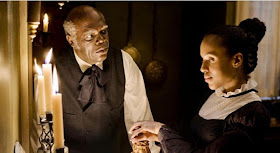 Django Unchained has a spaghetti western feel at times, with comedy thrown in to lighten the serious nature of events. Set two years before the Civil War we meet a plethora of southern money hungry characters. Leading the way is Don Johnson and Leo DiCaprio, both of whom you love to hate. Some outrageous scenes of what looked to be the start of the KKK makes for what would have been a dramatic scene of hooded men, but soon turns to being full of belly laughs. But aside from the comedy there's deep seeded darkness in a lot of these men. I can't think of one film where Leo has played such an awful slimy bad guy and really I have no desire to see it again. He not only pulls it off and sells the role with gusto, but the man makes it 100% believable. Cute dimples aside, he's creepy and gross and I'm not wanting to have any more Titanic dreams about him at the moment! 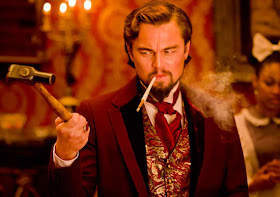 On the flip side, we have Christoph who's playing the good guy! It's like the cosmic acting tables are reversed with this movie and everyone who's usually a good guy actor is a bad guy. I loathed it and loved it all at the same time. My world was thrown upside down and shaken to bits while I was stuck inside! Gah! I will admit, however, it was not only refreshing to see him as a good dude but he plays it almost better than his evil side. His evil counterpart is pretty awesome though so that's saying something! 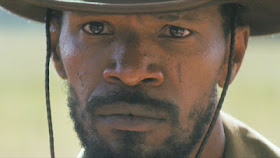 With plot complexity layered on top of blood, guts, and explosions the true winner here has to be Jamie Fox. What a role for this man to play and sell with every fiber of his being! This is a comedian turned serious actor and the subdued nature of his character was not only spot on but you could see, in his eyes, that this film meant something to him. And I just refuse to believe that the million dollar paycheck was all he was looking for, he slayed my heart with utter venerable passion.

I was emotionally blown away by it all, in equal measure. The film is over the top for sure but that's Tarantino style and it suits him well. If you've got a stomach made of steel and want to see a movie that will rattle your cage then get out there and see this film!