I am so excited! When I got my first kindle 3 years ago Joleene Naylor's Shades of Gray was the first book I bought because it was about vampires and only $.99. I instantly knew I was going to like my PNR and UF dark and action packed. I also might have an unhealthy attachment to the series hero Jorick. Since then Joleene has published 4 more books in her Amaranthine series with book #5 coming out soon.
I invited Jo to cook up a steaming hot serving of Jorick for you along with Verchiel, a relatively new additon to the Amaranthine series, much to Jorick's dismay. 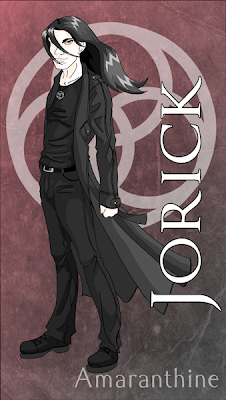 Compress bad temper until it appears to be “under control”, then mix all ingredients except the heart and let soak for five hundred years. Meanwhile, chip heart from the icy block of self-imposed isolation and allow to soften. Add to previous mixture and heat until it’s sizzling. Makes one steamy, dark vampire.

Katelina and Jorick walked down the gravel road. On either side of them were fields of snow, occasionally broken by a handful of dark houses, and yards lit by orange security lights.

Katelina’s toes were numb and she kept her hands burrowed in her coat. She was sure she’d have frostbite, on her nose at the very least, and she voiced the opinion more than once. Jorick’s patience soon ran thin, though he managed to keep his voice calm.

When her legs and feet finally gave out, she stopped in her tracks and declared loudly, “I can’t go any further. Are you trying to kill me?”

Jorick gave a low sigh, then wordlessly scooped her up and unceremoniously slung her over his shoulder like a sack of potatoes.

“Hey!” she cried. “What are you doing? I'm not baggage, you know!” She wriggled and kicked one leg uselessly.

“No, you're far too noisy to be baggage,” he joked and then sighed. “Do you have a better suggestion? Maybe I'll just whip out the magic carpet I keep in my pocket and you can fly in comfort?”

“Very funny,” she muttered. “The blood's going to rush to my head like this!”

“I'm sorry if you're uncomfortable, but it's the only practical way. It leaves my arm free in case I need it. I know you missed most of it, but vampires just attacked Oren's den, set it ablaze and, though we fought them, one disappeared into the night. I'm not really sure where he’s gone, and I don't like the idea of being surprised without at least one free arm to fight him off.”

“And you really think that he’s still lurking around?” She rolled her eyes. “It’s been at least six hours!”

“It’s been two hours; three at the most,” he corrected her. “Don't make me put you to sleep again. I will, you know.”

“Don't you dare! I don't like those stupid mind things you do and you know it!” She was as irritated as he was. This was the stupidest plan ever! To just stomp off in the middle of nowhere with no car, no food and freezing temperatures. There was absolutely no forethought put into it, that much was obvious.

“If you think you can do better on your own,” Jorick snapped in reply to her thoughts and then took a deep breath to calm himself. “Fine,” he said gently. “It wasn't the best plan, all right? But it's done now, and we've no choice except to make the best of it.” He paused before continuing. “And I know you don't like it, Katelina, but you're making enough noise to alert every vampire in at least the five surrounding states. If you don’t quiet down I’ll put you to sleep. I’m sorry, but I'll do whatever is necessary to keep you safe, whether you like it or not.” 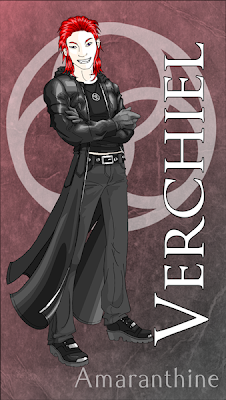 Mix all ingredients together and boil over an open flame. Allow to rise for a few hundred years in a dark, but noisy atmosphere. Shape and decorate with crayon-colored frosting to create one sinfully delicious dessert that is surprisingly low in calories. Serves as many as he can at once.

As the minutes ticked by, the only sound was the rustle of the book pages and Katelina’s breathing. The tense silence was like a load of bricks on her chest. When someone knocked on the door, she fell all over herself to get it opened without thinking who might be behind it.

After she saw who it was, she wished she’d thought first.

“Hey, Kately!” Verchiel grinned. “I thought you guys were clearing out last night?”

At the sound of his voice, Oren leapt to his feet and stormed towards them. He jerked the door out of Katelina’s hands and nearly knocked her over. “Unless you have official business, I suggest you leave.”

Verchiel held up his hands in a gesture of peace. “Well, you’re just as friendly as Jorick! Is that an inherited trait?”

Oren’s fists clenched at the comparison, and Katelina had a sudden vision of Verchiel getting punched again.

“Do you need something?” she asked quickly.

He put his hands behind his head, the picture of casual innocence. “I just thought that since Jorick was busy, you might be bored.”

“She’s none of your business,” Oren snapped. “Go away.”

Verchiel didn’t move. “So Jorick has you babysitting? That has to be annoying.”

“Go away,” Oren repeated with more venom in his voice.

Verchiel shrugged. “All right. I had no idea you enjoyed spending time with little Kately so much. But, if you’re resigned to waste your time as a second class babysitter, then far be it from me to interfere. I just didn’t peg you as the kind of guy who’d let someone slough demeaning tasks off on them.”

“Demeaning?” Katelina cried, hands on her hips. “What’s that supposed to mean?”

The damage was done. Oren growled threateningly in his throat, but took a step backwards. “I am not babysitting the human. I just don’t like you. I don’t give a damn what she does.”

“Good, then you won’t mind if I borrow her?” Before either of them could object, Verchiel tugged her out the door and down the hall. He slowed when they reached the elevators. “You can thank me later.”

“For what?” She jerked her arm loose. “Do you have any idea how pissed Jorick’s going to be?”

Verchiel looked stunned. “Wow! What did Jorick do to you guys last night? Took all the rebellion out of you.”

“He didn’t do anything! And I’m not rebellious!”

“Oh, yes. I can see that.” The elevator doors swished open and he pulled her inside. “Vampires or humans?”

“Humans,” she snapped without thinking.

“Ah, come on. There’s more fun downstairs on the first floor. Can’t you suck it up and deal with them?” He broke off and snickered. “Suck it up. Good one.”

“Oh, you’re right. Being surrounded by a bunch of bloodthirsty vampires sounds like a great time!” She crossed her arms over her chest, her eyes on the floor of the Atrium as it grew closer and closer.

“They’re not all bloodthirsty. In case you haven’t noticed, most of us can control the insatiable blood lust, at least in public. I mean, it is hard not to just attack you right here, with all that luscious blood, but…”

“Yeah, whatever.” Her eyes narrowed. “What are we doing, anyway? What are you doing?”

His surprise was overdone. “I’m rescuing you, of course! Jorick’s gone to see Malick and left you alone with the gloomiest vampire ever born! It was only a matter of time before you’d have to commit suicide out of sheer, naked depression. I couldn’t have that on my conscience, now could I?” 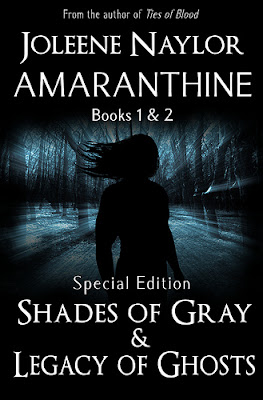 
Two books in one: Shades of Gray and Legacy of Ghosts, the first two novels in the Amaranthine series weave a bloody tale of death, war, love and most of all vampires.

Shades of Gray (book #1): Hunted by a coven of vampires, Katelina has only one person she can trust: Jorick. But when her knight in shining armor turns out to be one of the monsters she has to examine her perceptions of good and evil to survive.

Legacy of Ghosts (book #2): For Katelina and Jorick, peace is hard to come by. Kateesha plans to fight the same battle as Jorick’s fledgling, but a common enemy isn’t enough to overcome previous betrayals. Drawn into a deathly conflict, Jorick and Katelina must let go of old regrets, or lose their future to the ghosts of their past.

*What’s a special edition without special features? Includes the “Lost Chapters” from Legacy of Ghosts, the short story “How to Silence a Human”, links to downloadable content and a character gallery featuring original artwork. 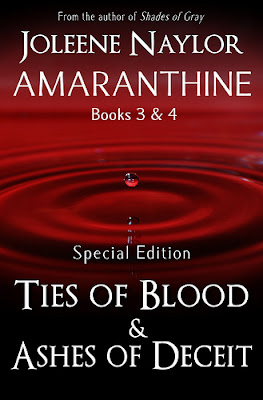 Amaranthine Special Edition Vol II
buy for only $2.99
amazon-BN
Two novels in one: Ties of Blood and Ashes of Deceit, the third and fourth books in the Amaranthine series, continue the saga of Katelina and her new world of blood, night and vampires.

Ties of Blood (book #3): A trip to Katelina’s home starts a chain reaction; she and Jorick meet Verchiel, a too friendly vampire, then the police arrest Jorick for kidnapping. Worse, The Guild wants to question them. Will Malick, the head of the vampires, punish them? Or will the mysterious vampire following them do the job first?

Ashes of Deceit (book #4): Katelina and Jorick must rescue a captured vampire and discover who really took him. The truth isn’t easy to find. As Oren’s attack on the Guild draws closer, Jorick and Katelina are led back to the Citadel. When the flames of war ignite, can they rise from the ashes, or will they be consumed?

*What’s a special edition without special features? Includes character interviews, the story of Lilith, links to downloadable content and an Executioner gallery featuring bios and original artwork. Why should DVDs have all the fun? 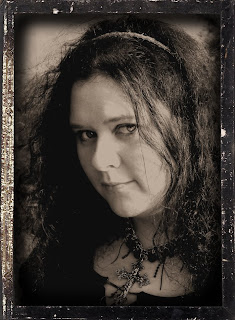 Joleene Naylor grew up in southwest Iowa surrounded by soybeans, corn and very little entertainment – so she made her own. She has been writing and drawing since she was a small child, with a particular leaning towards fantasy, horror and paranormal. It is this love of all that goes bump in the night that led her to write the Amaranthine series.
In her spare time she is a freelance artist, book cover designer and photographer. Her current projects include the fifth novel in the Amaranthine series, and Patrick: The Prequel. Joleene maintains blogs full of odd ramblings and hopes to win the lottery. Until she does, she and her husband live near Bolivar, Missouri with their cats, dogs and turtles. However, unless they start buying tickets she may never win anything

GIVEAWAY
Jo is giving away a print copy of Volume 1 & 2 of the Special Editions to one person. That is all 4 of her stories!
Sorry, but US only


all books available for ereaders and print
Sharon Stogner at 12:30 AM
Share