Book Review: After: The Shock by Scott Nicholson 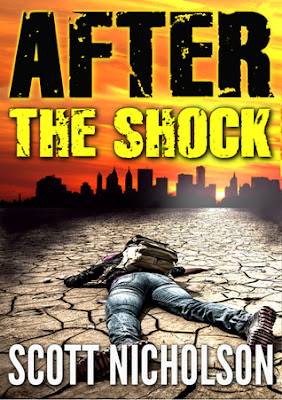 After: The Shock by Scott NicholsonA massive solar storm erases the world's technological infrastructure and kills billions. While the remaining humans are struggling to adapt and survive, they notice that some among them have...changed. Rachel Wheeler finds herself alone in the city, where violent survivors known as "Zapheads" roam the streets, killing and destroying. Her only hope is to reach the mountains where her grandfather, a legendary survivalist, established a compound in preparation for Doomsday.

Other survivors are fleeing the city, but Zapheads aren't the only danger. Rogue bands of military soldiers want to impose their own order in the crumbling ruins of civilization. When Rachel discovers a 10-year-old boy, she vows to care for him even at the risk of her own life.

And the Zapheads are evolving, developing communal skills even as they lay waste to the society they will eventually replace.

There have been a ton of post-apocalyptic books coming out lately and zombies have been the most popular reason for the downfall of civilization. All these stories have pretty much the same premise… a big OH CRAP moment, survivors try to… well, survive, ad they find out the scariest thing isn’t the (insert vehicle of destruction) but humans. What makes a post-apocalyptic book stand out from the crowd is how well-written it is and the stellar cast of characters. Long story short, Scott Nicholson’s After: The Shock stands out and is worth a read.

The book picks up two weeks “After” a major solar flare zapped all technology back to the stone age and everybody as well. Most people died instantly, others appeared to have their brains “altered” (I have my own ideas of what happened to their brains, but don’t want to spoil) and are going around in a rage killing everything, and an even smaller number of people survived with no apparent ill effects. Scott has created some very interesting characters that are trying to survive in a world crumbing apart. There is no way to avoid some of the stereotypical survivor archetypes, but stereotypes are around for a reason and in NC these characters are pretty much true to form. Scott has managed to make these characters interesting, despite relying upon common character archetypes. We follow the journey of several small bands of survivors who seem to be fated to meet in later books. My favorite characters are Devontay, a young black man with a glass eye and a radical survivalist up in the NC Mountains. There is also a young woman named Rachel who is traveling with Devontay. She is a devoted Christian and is trying to hang onto her faith in this time of trouble. The only problem I had with her character was when she contemplated doing something that was VERY out of character for her. It didn’t make sense and I can’t be more specific cause of spoilers <G>. Also there is a Mexican immigrant and his family, which you normally don’t see in post-apocalyptic stories

There is action, character development, a little dark humor, great pacing and it is all set in my home state of NC. It was kind of strange reading about the characters trekking through areas I am connected to, but cool at the same time.
After is going to be a trilogy and the ending of this first book kind of snuck up on me. The characters and action were at a stopping point, kind of like the end of a TV series, but no previews for next week’s show <G>.

Solid well written story that will have you turning pages! Looking forward to After: The Echo coming early 2013.


about the author:
website-fb-twitter-blog
Nicholson has written hundreds of songs and poems and was a musician in a former life. a newspaper reporter, he won three North Carolina Press Association awards. He's had the usual collection of odd jobs: dishwasher, carpenter, painter, paranormal investigator, baseball card dealer, and radio announcer. Now he haphazardly trades words for magic beans and uses "haphazardly" as often as possible while decrying the overuse of adverbs.

Entering the digital era with a vengeance, Nicholson is releasing orginal titles and collections while conspiring to release interactive books in the near future, building audio files, video, and collaborative fiction projects. He also launched eBookSwag to embrace the future of free ebooks.

Nicholson won the grand prize in the international Writers of the Future contest in 1999. That same year, he was first runner-up for the Darrell Award. He studied Creative Writing at Appalachian State University and UNC-Chapel Hill. He has been an officer of Mystery Writers of America and Horror Writers Association and is a member of International Thriller Writers and inaugural member of the Killer Thriller Band.

Unfortunately, they never taught him to write: he had 105 rejections before his first story sale and over 400 before he sold a novel. He hasn't learned much from his mistakes but thinks he'll probably improve with practice. If nothing else, he's become a better liar.