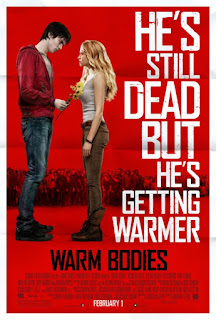 Warm Bodies, directed by Jonathan Levine, stars Nicholas Hoult, Teresa Palmer, Rob Corddry, John Malkovich, and Dave Franco. There are films that are made to create deep emotion, films  made to shock and awe the audience with an abundance of spectacle and visual effects to back them up. But then there are the films that are just plain old fun to watch and Warm Bodies is firmly in the second category.

Plot:
A funny new twist on a classic love story, WARM BODIES is a poignant tale about the power of human connection. After a zombie epidemic, R (a highly unusual zombie) encounters Julie (a human survivor), and rescues her from a zombie attack. Julie sees that R is different from the other zombies, and as the two form a special relationship in their struggle for survival, R becomes increasingly more human - setting off an exciting, romantic, and often comical chain of events that begins to transform the other zombies and maybe even the whole lifeless world.

The film picks up with our main dead guy, R, who's living the solemn life of the walking dead. Braaaains! Shambling around an airport with like minded, or rather mindless, folks looking for their next human meal. Or, just killing time. See when you're the undead you certainly have an abundance of free time to kill. As we follow R around in his daily life it's clear that the film makers took some liberties with the typical undead corpse. These zombies have a bit more brain left functional, and contrary to belief, can absolutely climb stairs and hold some interesting grunting conversations. Yes, Summit Entertainment is the same group that brought the Twilight Saga to the sliver screen and yes, there a few Twilight-esque moments, but this film stands far and wide apart from the Twi-herd. (Which I am a part of. Baaaaaa.)

Fighting the hordes are a group of humans who have bunkered down in a small portion of a major city, surrounded it with a massive wall and armed guards and are trying to survive in an impossible situation. As a small group of young adults sets out to scavenge for supplies they run into R's herd of zombies, at which point an instant connection is made between Julie, played by Teresa Palmer, and R .You'll remember her from I AM Number 4, where she was kick ass amazing!

R pretty much kidnaps Julie and takes her to his humble abode, an airplane that he's pimped out for his own pleasure. A relationship builds against all odds and slowly grows from this point until the end of the film. There are plenty of laugh out loud moments and funny situations that kept me entertained and eagerly waiting to see what could possibly happen next. With two different sets of zombies on the loose, you soon learn that there's a group of zombies becoming totally twisted and another that's just barley hanging onto their last scraps of humanity. A big helping of this story focus on friendship and overcoming the odds to change something inside you and those around you.

Warm Bodies is filled with enough gore to keep the horror folks happy while at the same time opening a door for those who like a little less blood and guts. I fall under the latter category and while I can say brains look tasty, I'm glad it's not my food of choice. In addition there was stunning zombie makeup with a realistic human level that breathed unlife to the actors. Aided by some wonderful cinematography that helped keep the movie flowing and give a sense of vastness of the film. All of this was paced to a slamming music soundtrack that had me bopping my head at the appropriate times.

If one important thing can be learned here it is this: never monologue before you're about to kill something. When you stand there, with gun locked and loaded in hand, and start to monologue...dude, you're asking for trouble! Has no one watched The Incredibles but me?!

This is a fun film that guys and gals can both agree on. Take a group if you can and get ready to laugh, for once we can root for the zombies!

Getting 4 'you missed a spot' Sheep
KD