(Kate O’Hara shows up in a rush, hair in a pony tail with curls springing like crazy and her smudged glasses askew.)

Oh, hey, hi! Am I late? Sorry. Swear to God, I could get lost in a telephone booth.

I’m here today to talk about my author, Cathy Yardley. She tried to offer me twenty bucks and the chance to “take it easy on me” in the third act of book two if I behaved myself, but I said to myself, “Self, what other chance am I going to have to humiliate my author?”

So I decided I’d talk about my all time favorite story about her. Specifically, why she doesn't carry a purse.

See, she was going off to college at the University of California, Berkeley. That’s just north of Oakland. And a lot of the people in the small town she grew up in warned her that there was tons of crime, and that she’d probably get robbed. There’s a ton of people at the school – they’d probably just pickpocket straight out of the large purse she always carried.

No, no, she assured them. She’d be careful. She’d be vigilant. But there was no way she was abandoning the purse.

“Wear it crosswise over your shoulder,” the cautioned. “Always make sure it’s shut if you’re not using it!”

“I promise,” she responded.

So one day, she’s in a huge class… hundreds of students. They’re being dismissed. She puts her purse over her shoulder crosswise, gets up, and promptly gets crushed in the mob of students trying to escape.

Her bag’s caught behind her, and she realizes she hasn't checked to make sure it was zipped shut. So she blindly reaches back and feels for the zipper.

Only to realize that her purse feels… sort of funny.

Frowning, she looks over her shoulder…

… and discovers that she hasn't checked the zipper on her purse.

She’s checked the zipper on the pants of the man standing behind her!

Ever since, she has never, ever carried a purse! True story!

(Cathy buries her head in her hands.)

Well, to the guy’s credit, he was definitely carrying more than a change purse and a pencil. Or so I’m told.

(Cathy glares over her hands.)

I’m really going to catch hell in the second book, aren't I? 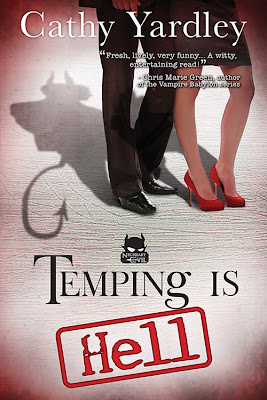 WORST. JOB. EVER. Kate O'Hara can't wait until this temp assignment is over. The woman who hired her is a psychotic pageant queen, her coworkers are convicts-turned-clerks, and it's so boringly corporate it makes her skin crawl. Even her sexy-as-sin boss, famed billionaire Thomas Kestrel, isn't enticement enough to keep her there. Once she makes enough to pay off her bills, she's out. Or so she thinks...

WHAT THE HELL?Next thing she knows, she's accidentally signed over her soul. Literally. And she's discovered Thomas's real mission: to kill thirteen bad guys in one year, in order to get his—now his and Kate’s—souls back.

IT'S NOT JUST A JOB. IT'S A MISADVENTURE. From learning to boost the morale of some paper-pushing demons to navigating her way through blood-red tape, Kate has to work closely with her super-hot supervisor and get her flaky act together, before somebody clocks her out—permanently! 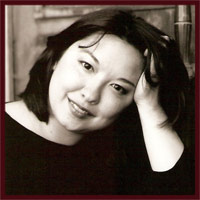 About the Author:
website-fb-twitter
After years in the corporate world, Cathy Yardley managed to tunnel her way out of her cubicle with a spoon she'd stolen from the break room. She now writes urban fantasy and romance, and celebrates her freedom from the cube farm in an undisclosed location somewhere near Seattle, WA. You can read an excerpt from her latest novel, TEMPING IS HELL, on her website.


***GIVEAWAY***
e-copy of Tempting Is Hell
1.leave a way to contact you in the comments
2. what is the worst job you ever had? (if you haven't had a bad one tell us the best job you had.)
Katie Dalton at 12:00 AM
Share