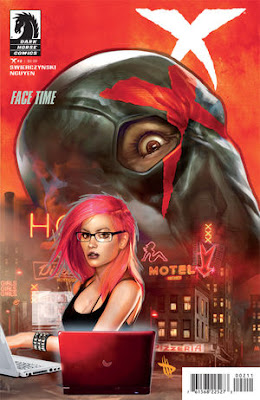 I never read comic books as a kid. Did The Punisher get his ass kicked a lot? I only ask since there is a vague Punisher vibe coming from the X Killer. That whole killin' villains with hyper-violent pinache kind of vibe, you know. And when X does it, he tends to walk away with as much of his own blood on his hands as of his enemies. But the dude's tougher than Samsonite luggage wrapped in kevlar.
Still, underground reporter, Leigh Ferguson, finds the masked vigilante battered and bloodied in an alleyway and doing something she didn't expect: asking for her help. What's a girl to do?
Most gals would have high-tailed it out of there before the corrupt police force or the seemingly few surviving gangsters showed up to finish him off. Leigh ain't most girls and piles the masked sack of tenderized meat into her car. Getting blood out of the upholstery is a pain, but so is the police barricade they run into. What's a girl to do? 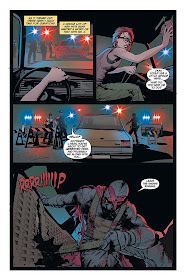 In Leigh's case, her sleuthing has drawn the ire of not just the sleazy mayor who wants the anonymous blogger spilling the goods on his schemes, but also the X Killer himself. At this point it's a small miracle she hasn't received a gift-wrapped bullet to the brain. But it's not like X can be all that mad at her, since she did pull the proverbial thorn from his paw at the start of this issue. That's gotta count for something, right?

Swierczynski's and Nguyen's X is a cross between a Gatling gun and a rampaging elephant. If he isn't putting a bullet in you, he's stomping a mud hole in you, with a mop and a bucket required at the end more than a body bag. Revenge thrillers don't come with much more carnage than this, unless maybe if you're watching Old Boy or Ichi the Killer. If the action is getting ramped up further in this series, I can't imagine how.