Book Review: The Wolf's Mate Book Six: Logan and Jenna by RE Butler 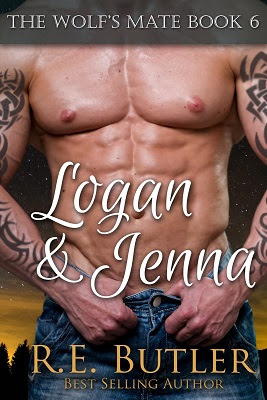 The Wolf’s Mate Book Six: Logan & Jenna (May 2013)
Jenna Odile planned to spend the eve of her twenty-fifth birthday partying with her friends before she cast a spell to find her truemate. Before she can, she’s captured by a group of criminally-minded werewolves who want to use her fae-abilities to commit crimes. Poisoned and left for dead, she used the last of her strength to cast the spell for her truemate, hoping that he would find her before it was too late.

The last thing Logan Anderson wanted to do with his Saturday evening was watch over the young male wolves in his pack while they attended a dance in hopes of finding their mates. As the night wore on, he began to feel compelled to leave, and his instincts led him to race into the woods at the side of the highway. In the darkness of the woods, he finds a woman near death, who begs him to protect her. Now, nothing is more important than helping her get well. He’ll deal with those who hurt her… later.

This story contains a male werewolf with a dark past, a fairy who can’t wait to find her truemate, and the betrayal that brings them together. Features hot werewolf-fairy loving, mythical creatures, full moon madness, and lots of neck biting.

I'm a sucker for a hero with the name Logan, the fact that he's a wolf is just icing on an already yummy cake.

Usually with the paranormal romance I'm reading, the hero is a powerful shifter and the heroine a mere unsuspecting mortal. I was glad to see that author R.E. Butler decided to make Jenna, the heroine, a fae giving her more equal footing with Logan. Though she's technically a fae of lower rank in her world, she doesn't let any one put her down or treat her as a lesser being. Jenna has been to the mortal realm before, while on vacation with her parents but Logan's world is still somewhat new to her. She isn't stupidly naive about it though. She's boldly curious and learns to adapt quickly. It's her world that Logan has trouble with!

I loved the different realms and how what was normal for Jenna was literally a different world to Logan. His reaction to Jenna's world was amusing. Blue horses, blue boars? And a feisty sprite named Darlie? She was my favorite. Deciding to make her home in Logan's backyard, Darlie was confident, bossy and and as tiny as she was, she didn't show any fear of Logan at all.

Old characters from previous books make an appearance, but for the most part it is strictly Logan and Jenna's story. Their romance is front and center and doesn't disappoint. As far as the paranormal aspect of the story goes, I would rate it a 3. It's there and it partially defines the characters but it isn't a main factor in the book.

Fun, uncomplicated and sexy, Logan & Jenna can be read as a stand alone without any fear of spoilers even though it is book six in a series. 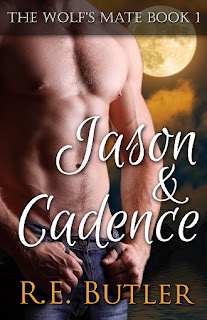 The Wolf’s Mate Book 1: Jason & Cadence (January 2012)For 14 years, alpha wolf Jason has watched his partially marked mate Cadence live her life without him. Circumstances force his hand and he must find a way to get her to uncover her buried memories of their past before someone else steps up to take her from him. For as long as she can remember, hybrid wolf Cadence has loved Jason with every fiber of her being,but he’s consistently shoved her away until the love that’s there is bound tightly in anger and shame. No one can take his place in her heart, but that doesn’t mean that there aren’t wolves willing to try. Will Cadence be able to get through Jason’s icy demeanor to the heart of the boy she’s always loved? Can Jason undo the past so they will have a future together? This book contains red-hot werewolf loving, plenty of neck biting, and misuse of a kitchen counter. The Wolf’s Mate is a book for mature audiences only and contains sexually explicit content.

Available for 99 cents on 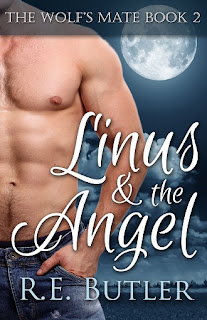 Linus Mayfield has a lot of good things in his life: fourth ranked in the Tressel wolf pack, nice house, decent job, and plenty of friends. What he doesn’t have is what he longs for most – a true mate. His first foray into marriage was a disaster and he’s certain he’ll never be free to love again.
She’ll prove him wrong:

Karly is an Angel, a supernaturally perfect mate for one special werewolf. She’s spent the last 15 months looking for her mate, only to nearly die before she ever meets him. One icy winter night changes both of their lives forever.

When their past interferes with their future, will all be lost in the darkness, or will he find his perfect angel in time? This book contains plenty of claws and fangs, possessive werewolves willing to move heaven and earth for their mates, red hot werewolf sex, a sweet wolf with a heart of gold and an angel made just for him.

Available for 99 cents on 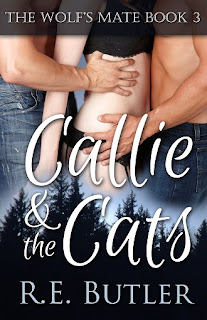 The Wolf’s Mate Book 3: Callie & The Cats (June 2012)
Callie Hunter, best friend to alpha half-wolf Cadence, has had enough of the pack life. Setting her sights on anyplace without wolves, she heads north only to be sidetracked by a devastating car crash that brings her face to face with twin mountain lions.

Ethan and Eryx, small town sheriff’s deputies, knew the moment they touched Callie that she was the mate they’d always wanted. But mountain lion females don’t take kindly to sharing their males with anyone else and will do anything in their power to discourage Callie from sticking around. Will Ethan and Eryx’s desire for Callie cost them everything, or will Callie find her inner wolf and the home she’s always dreamed of?

This novel contains menage-a-trois, hunky cops, handcuffs, an on-the-run she-wolf, sex in every room in the house, and inappropriate use of the phrase “assault with a deadly weapon”. 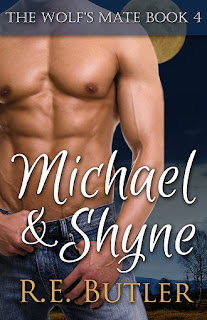 The Wolf’s Mate Book 4: Michael & Shyne (October 2012)Michael Gerrick was beginning to wonder if he would ever find his truemate. Fate seemed to smile on him, when he fell hard for the delectable fitness instructor, Shyne. The only problem: three were-hyenas want her for their clan and are willing to do anything to get him out of the way.

Shyne Jackson was smitten with Michael from the moment they met. Swept up by his devastating good looks and sense of humor, she’s unaware of the plotting of her were-hyena bosses behind the scenes as they attempt to keep her and Michael apart. When they cross the line, will a showdown of fur and claws destroy everything she holds dear?

This book is for mature readers only and contains a wolf looking for his mate, a woman with a dark past, neck biting, plenty of teasing, wisecracks galore, and creative use of a pool table. 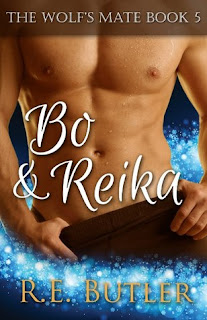 The Wolf’s Mate Book 5: Bo & Reika (January 2013)
She’s on the run for her life …As a child, she-wolf healer Reika Snow was promised as a mate to three were-lynxes to prevent a war between her pack and the lynx clan. Her freedom is coming to an end as her twenty-third birthday arrives. With her bleak future as the subjugated bride of the three males looms near, she does the only thing she can think of … she runs. With the lynxes hot on her tail, the only thing she can do is pray she can find safety, somewhere.

He’s not going to let her get far …Bo Elliot, highly ranked member of the Tressel wolf pack, rescues a she-wolf from the claws of three were-lynxes as they attempt to capture her. When she awakens, he’s surprised to find himself staring into the beautiful blue eyes of his truemate. With his bum leg, Bo doesn’t want to tie Reika down to a wounded male like himself by acknowledging that they’re mates, but he vows to set her free from the lynxes and give her back her life. It will take every trick in Bo’s book to keep Reika from taking off on her own in a misguided attempt to spare him from getting tangled up in the hot mess of her life, but Bo will do anything for his truemate, even if it means walking away once she’s free.

This book contains a scarred wolf with a heart of gold, a she-wolf healer who wants to protect her truemate at any cost, and a wolf-on-lynx battle that will determine where Reika spends the rest of her life. Readers should expect possessive werewolves, passionate sex, neck biting, and the kind of horniness that only the full moon can bring. 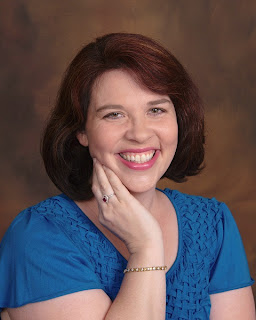 About the Author:
website-FB-twitter-email
I always wanted to be a homebody and live in one place for my entire life, but fate had other plans. In the past twelve years of my married life, we’ve moved seven times, including from one coast to the other. Southern New Jersey is home now and I love it. I have two young children, a husband who begrudgingly pays for my ebook addiction, and two dogs that think they’re people. After college, I spent eight years as an executive assistant before “retiring” at twenty-seven to become a stay-at-home mom. I have a soft spot for self-published authors, Ghirardelli chocolate, muscle cars, and men with tattoos. Most people who know me don’t know I have a tattoo of a tiger on my hip or that I have an unhealthy obsession with The Simpsons.

I love sunsets, several cups of coffee in the morning, and I absolutely cannot live without books. When I’m not busy with my family, you’ll find me sitting at my desk working on any number of projects, including reading, reviewing, and writing.