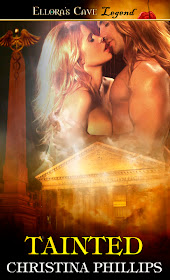 Tainted
by Christina Phillips
ISBN: 9781419940734
Ellora's Cave
A dangerous love that Rome will never allow…
Driven by the knowledge he failed to protect his king and embittered at losing the woman he loves, Celtic warrior Gawain despises the lust he feels for the beautiful Roman patrician, Antonia. She is everything he’s never wanted in a woman, yet she ignites his passion like no other. Despite the danger of discovery he embarks on an illicit liaison with her, determined to uncover the reason for the infinite sorrow that haunts her eyes.

Newly arrived in Britannia from Rome, Antonia is inexplicably drawn to the cold, tough Celt whose touch stirs a desire she long thought died at the hands of her brutal former husband. With Gawain she learns the pleasure of sex and his unexpected tenderness thaws her frozen heart. But she hides a deadly secret that could be her undoing, and knows her growing feelings for him can lead nowhere. Yet when a shadow from her past threatens her future Antonia is torn between the Empire of her birth and betraying Gawain, the man she’s grown to love.

Inside Scoop: This medieval romance dabbles a wee bit in the paranormal. 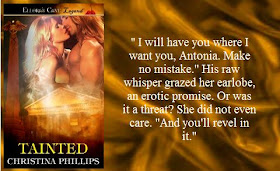 A door opened to her left and she turned to see Gawain stroll in from the bathhouse. Her heart thudded against her chest, making it hard to draw breath, and the pit of her stomach trembled with strange, liquid heat.


He looked utterly foreign, a savage warrior, and sunlight glinted on the barbaric jewelry around his throat and at his ear. He smiled, a slow, seductive smile that sent tremors through her blood and did nothing to ease the constriction in her breast.Except for Elpis, she was alone with a strange man, a man she had virtually propositioned in the street. A native of a conquered land who made no secret of the fact he despised her people. And yet it wasn’t derision that glowed in his eyes. It was lust.

“Lady Antonia.” His smoky voice wrapped around her senses, as potent as though he had wrapped his arms around her naked body. “You kept your word.”

“Did you doubt I would?” She scarcely recognized her voice. She sounded like a sultry seductress. Perhaps, after all, Gawain would never guess what a novice she was when it came to playing such dangerous games.He stopped in front of her, so close that the amber flecks in his dark eyes mesmerized her. “No.” The word sank into her blood, igniting sparks of pleasure that skittered across her exposed flesh. “You want this as much as I do.”

About the Author:
Website Facebook Twitter Goodreads Blog
Christina loves writing dark tales of tough, sexy warriors who are brought to their knees by their heroines. A mystical touch of fantasy or paranormal usually weaves its way through her stories, although strangely enough this wasn’t her intention when she first starting writing her Roman/Druid romances. But when ancient gods and goddesses get involved, it’s best just to go with the flow J

She is published by Ellora’s Cave and Berkley Heat and has dipped her toe in the indie pub waters. She is a member of the Romance Writers of Australia, Romance Writers of America, the DarkSide Down Under Group Blog and Historical Hearts Group Blog.
Christina is an ex-pat Brit who now lives in sunny Western Australia with her family. She is also owned by three gorgeous cats who are convinced the universe revolves around their needs. They are not wrong.