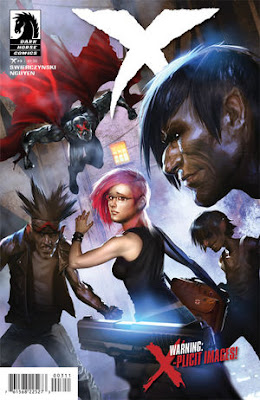 The vermin of Arcadia’s underworld chase Leigh into a literal urban maze . . . and what’s waiting at the end ain’t cheese! A revived Berkshire’s got a beautiful new face and an appetite for revenge, mobilizing the entire police force against X.

“Very gritty story here, and that goes for the artwork as well! Bullets flying and blood splattering is on the menu, so if that’s your thing, don’t miss out!”–Comic Attack


Leigh wants answers, but it looks like all X has is a huge chip on his shoulder. In the beginning of this issue, it seems like Leigh is on the X Killer's shit list, already served a photograph with one red slash across her face. A warning, since two red slashes make an X--and an X means you're in the X Killer's crosshairs.

The cat-and-mouse antics between the X Killer and the corrupt mayor and his minions has gone up another notch in this issue, too. That's pretty remarkable considering how absolutely insane the violence has gotten in this series so far. The switch in this issue is that it looks like X is on the run, and the convalescing mayor Berkshire is gradually penning the vigilante in as he focuses on finding Leigh to extract from her X's whereabouts.
I only just realized in reading the letters to the editor at the back of this issue that X had a previous run. I'm not sure what that original series looked like, but it's hard to imagine the original series could be as sharp as this incarnation. Like razor-wire sharp. 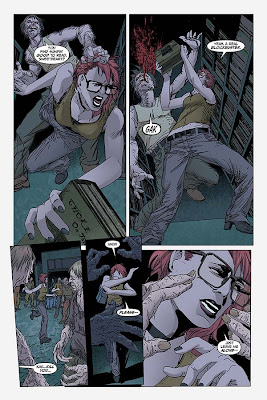 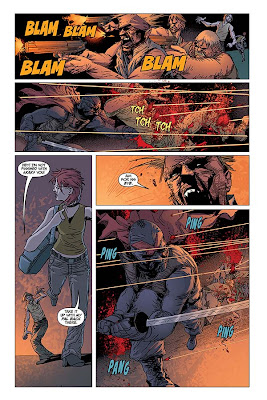 Swierczynski has such a keen focus on where the story needs to focus, I'd swear he uses a laser-sight. As for Nguyen's blood-soaked depictions of the action and gritty portraits of what pass for quieter moments in the story are like bear traps for your eyeballs.

There's another showdown brewing for the fourth issue and I have a hunch it's going to be the best one yet.