Today we have urban fantasy author Kerry Schafer visiting. Unfortunately she had to leave her dragons at home. We talk about totem animals, Zee cookies, flesh eating penguins and a viking (but don't touch the viking, Kerry appears to be very stingy when it comes to him)

be sure to check out her theme music 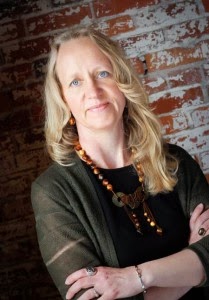 Sharon: Hello! Welcome to the Flock. We love dragons here. We even have our very own dragon named Jake. He lives in the dungeon over in our Facebook group…he likes gummy bears and cinnamon hearts.
Kerry: Thanks so much for inviting me over. I've left the dragons at home because they eat sheep and I'm not sure how they would get along with Jake. I've tried to instill some manners, but you know – dragons.
Sharon: I know, you can take the dragon out of the wild, but not the wild out of the dragon.
Kerry: Ain't that the truth? 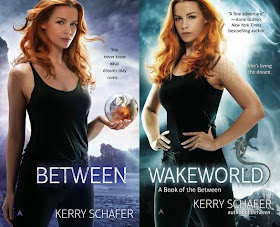 Sharon: Let’s start out with telling our readers about your series The Between.
Kerry: The Between is a place between waking and dreaming where anything is possible. And in case that sounds awesome, it's important to remember that nightmares are also dreams, and those dream monsters that chase you are very real in the Between. Vivian is a Dreamshifter, which means she is not only responsible for guarding your safety by keeping the doors closed between dreaming and waking, but she can also enter dream worlds at will. (Except when she gets locked out, of course, which is what happens in Wakeworld.) She also has dragon blood burning through her veins, which results in a disconcerting tendency to turn into a dragon. This causes her some distress, especially since Zee, the love of her life, was born to be a dragon slayer.
Sharon: Dinner with the future in-laws could be a-w-k-w-a-r-d… If the nightmare monsters are real, then that mean my dream Thor would be too, right? See where I am going with this?
Kerry: I do! Be careful, though, because a dream liaison of that sort can have certain – consequences – as Zee finds out to his dismay in Wakeworld.


Sharon: I also see you have a novella series called Dream Wars. How much does it cost to hire a dream runner and would you recommend it?
Kerry: I do not recommend ever hiring a dream runner. It seems like a great idea at the time, but since you never know what it's going to cost you until after you've ordered in your designer dream, it's a proposition that could cost you your soul, your memory, or even your life.


Sharon: In Denise’s review of Wakeworld she mentions a penguin named Poe? What’s his story?
Kerry: Poe is a dream penguin, and Vivian's totem animal. He follows her out of a dreamworld early in the book Between, and stays with her as a companion. Even though he never speaks, it's clear that he has thoughts of his own and he sometimes acts as a guide.

Sharon: I take it penguins aren't tasty to dragons? What would your totem animal be?
Kerry: Oh, most dragons would be more than happy to have a nice penguiny morsel. Fortunately, Vivian has some control over her dragon tendencies. Most of the time, anyway. The first time ever that I drew a card from an animal totem deck I got a Mountain Lion. I'm sticking with that.
Sharon: If someone wanted to make a Zee cookie what are some of the ingredients would they need?
Kerry: Ahh! Um, one part soul of artist, two parts warrior, infuse with essence of passionate lover.

Sharon: Dental hygiene must be a big priority for a dragon. How do they keep those teeth sharp and pearly white?
Kerry: Well, they sharpen them on the bones of their prey, but I fear their teeth are more often bloodstained than pearly white.


Sharon: If every time you walked into a room theme music played (you know, like a superhero) what would yours be?
Kerry: Another One Bites the Dust? Just kidding. Let's see – it would have to be a Mark Knopfler song. Let's go with The Bug. Apart from the fact that I adore Mark Knopfler, this song is my reminder that the good and bad things in life are all mixed up together and to just enjoy the ride.
Sharon: His voice always makes me think of early MTV. I loved Skateaway.
Kerry: I might maybe be a little obsessed.


Sharon: You are a native Canadian, but live across the border in Washington now. Is there a place in the US you haven’t been too, but hope to one day?
Kerry: Tons of places! I have seen very little of the south and would really like to visit. And I love the ocean. You know what would be really fun? Driving the entire coast all the way around the country.
Sharon: When you hit NC I can help you out. I grew up near the coast.
Kerry: Excellent. I've got some familiarity with the West Coast, but that's it.

Sharon: Your bio mentions a childhood book collection. How big is it and which book/series had a big impact on you? 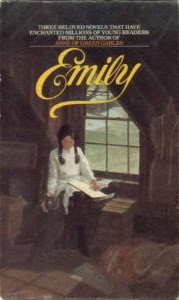 Kerry: I've lost a few along the way, but let's just say that I have more books than shelves at the moment and I really need to do something about this soon. The collection stems from early childhood, so there's a whole row of Dr. Seuss books. And then there's everything Louisa May Alcott wrote, not just Little Women. The Five Little Peppers and How they Grew books. Pretty much everything by Lucy Maud Montgomery, who wrote some other fabulous books besides Anne of Green Gables. I particularly loved her Emily books, partly because Emily was a struggling young author with huge aspirations, but also because Emily gets glimpses through the "curtain" into the supernatural. Well, that and her love story with Teddy. My mother encouraged my love of reading and our house was full of books, but she was not (and still isn't, by the way) a fan of fantasy. So my early introduction to my favorite genre came from fairy tales and King Arthur stories discovered in the library and at school.
Sharon: When are parents going to learn? If you don’t like something then your kids will! I grew up around mysteries, literary fiction and historicals… I don’t care for those, I want books about sexy men fantasy!
Kerry: Funny how parents don't encourage those books, isn't it?

Sharon: bookmark or dog ear?
Kerry: neither. I have place finding radar.

Sharon: windows up or windows down?
Kerry: how cold is it? Definitely down in the summer.

Sharon: Pepsi or Coke?
Kerry: not big on soda, but definitely Coke
Sharon: *shakes head and wipes a tear away* damn, and I thought we could be friends… <G>
Kerry: 'tis a great sadness. Well, better to know, than not.

Sharon: sci fi movie or romantic comedy?
Kerry: sci fi, but I do love me a good rom com every now and then

Sharon: Is there a movie you are excited for? I can’t wait to see the new Godzilla because…GODZILLA!
Kerry: Hmmm. Right now? Nope. Actually can't think of anything I'm dying to see.

Thanks for taking the time to visit. Is there anything you would like our readers to know before we give you a tour of the dungeon?
Kerry: Dungeon? This sounds ominous. I forgot to bring gummy bears for Jake. If I don't reappear, somebody please let my Viking know to come rescue me? Also – I love hearing from readers. You can tweet me @kerryschafer, or hang out on my Facebook Page: http://www.facebook.com/kerryschaferbooks
Sharon: WHOA! Wait…what Viking? You never said anything about a Viking. Does he have any friends?
Kerry: MY Viking. MINE. Guarded by dragons and flesh eating penguins. 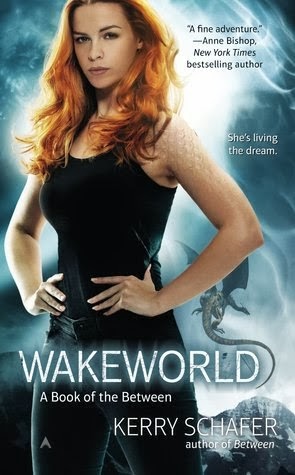 Wakeworld (The Between #2)
By: Kerry Schafer

Mass Market Paperback, 304 pages
Release: January 28th 2014
Publisher: Ace
Vivian Maylor is trying to hold it together. But her attempts to build a life with the man she loves seem doomed by the dragon inside her yearning to break free. Vivian is a dreamshifter, the last line of defense between reality and the dreamworld, and the only one of her kind.


Weston Jennings also believes he is the only one of his kind. He fears his powers as a dreamshifter, and resists learning to control them. After suffering a tragic loss, Weston heads deep into the woods of the Pacific Northwest to embrace a safe life of solitude. But when a terrible mistake leads to an innocent’s death, his guilt drives him to his former home, where he encounters what he never thought he would find: another shifter.

Now Vivian and Weston must work together to defeat a new threat to the dreamworld.

About the Author:
website-FB-twitter
Kerry Schafer is licensed both as a Mental Health Professional and an RN, and spends most of her daylight hours helping people–usually even with a smile. In books, she gets to blow stuff up, preferably with something more interesting than a bomb. Dragons are good; exploding giant slime toads are even better. She has published two novels with Ace Books: BETWEEN, which was released in January 2013, and WAKEWORLD, slated to hit stores in January 2014. She is also the author of THE DREAM WARS novellas, available where electronic books are sold.
Kerry and her Viking live in Colville, Washington, in a little house surrounded by rocks, trees, and gangs of deer and wild turkeys.
click images to go to amazon page