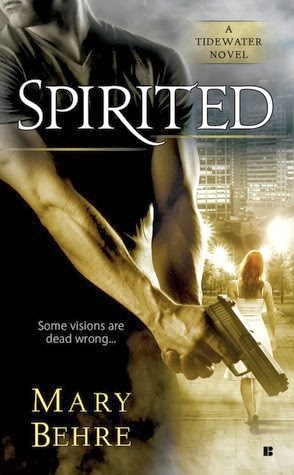 All Jules Scott wants is to live a normal, quiet life—preferably one that doesn’t include ghosts. Jules’s talent for communicating with the dead has brought her nothing but trouble. Despite her best efforts, needy spirits always find her and draw her into their otherworldly drama. When one implicates her in a series of deadly crimes, she may need to entrust her secrets to the person least likely to believe her
He’ll do whatever it takes to catch her.

Detective Seth English can’t get distracted from the big case he’s working on, not even by his alluring new neighbor. He doesn’t believe that Jules had anything to do with the string of robberies-turned-murders that he’s investigating, but when she keeps showing up in all the wrong places, his gut tells him she knows more than she’s letting on. To solve his case, he’ll need to expose what the sexy redhead is hiding—no matter how impossible the truth may be.

Spirited was a fun little romp. Jules Scott is a wonderful character who has been hurt and damaged, but is resilient with a loving heart and strength of character. Oh and by the way she just happens to see dead people, that is, the ghosts of dead people who seem to pop up at the most inopportune times. This leads to drama and mayhem, a few tears, and definitely some giggles throughout the tale. While Spirited is a light read that is a bit formulaic, the writing and character development was very well executed. There is definitely some heartbreak and drama, as well as some surprises all of which make this a fine beginning for a fun series. I have to admit that while I was often certain about how various characters would evolve or events would unfold, as well as busy predicting the solution to the mystery - I ended up being fooled every time and it was wonderful to be completely surprised by who-done-it at the end.

The one point that keeps this from a light reading five star for me is Seth. Of course this most certainly stems from personal bias, as he is all you want in a handsome smexy tortured hero; yes there is some smexy going on in the story that is sensual and sizzlingly well written. However, he tended to be a bit annoying in that from the beginning of the story, having known Jules for a day or less, he is calling her precious and continues to do so throughout the tale causing me to cringe. I was just unable to accept this from his character profile and found myself visualizing a certain character, a little gold ring, and a trip down into Mordor wanting to jump in every time he said it. In all fairness there is a time where there is a bit of light banter that deals with this and I was able to tune out his continuing transgression as the story progressed.

Like many first books in a series or trilogy, Spirited sets the scene for more to come, the ending was very satisfying and left me wanting to read more. By the way there was a sneak peek of book two, which I have to say looks like a real hoot and I cannot wait to read it. I received this book via Netgalley. 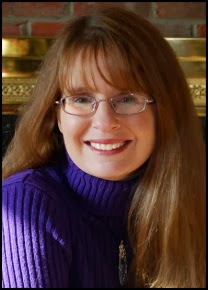 About the Author:
website-FB-twitter-blog
Mary Behre is the lone female in a house full of males and the undisputed queen of her domain. She even has the glittery tiara to prove it. She loves stories with humor, ghosts, mysteries and above all else, a good romance. When not writing she enjoys reading, gluten-free baking, and spending time at the ocean with her family.

Her debut paranormal romance, SPIRITED (A Tidewater Novel) was an award-winning manuscript before it was sold to Berkley Sensation. The first in a new series, SPIRITED, follows the life of Jules Ward, a reluctant psychic who’d rather be a florist than a medium but is caught up in a murder mystery when her cell phone is found in the hands of a dead woman. The only person who can help her, Detective Seth English of the Tidewater Police Department, wants to help Jules. He senses she’s not part of his case but is hiding a secret. Can they ignore their burgeoning passion long enough to solve the mystery or will Jules be the next victim? SPIRITED (A Tidewater Novel) releases March 4, 2014.