I was raised on a steady diet of Asimov, Heinlein, Niven, and Pohl. Hard science fiction gave way to fantasy, both epic and comedic favorites Tolkien, Robert Aspirin, and (dare I admit?) Piers Anthony. My Terry Pratchett obsession came later than many, and I had not yet encountered the dark beauty of Neil Gaiman's prose.

My uncle introduced urban fantasy to me by an older name, a more literary term, "magic realism". He loaned me book after book by Charles de Lint. I fell in love with his Newford books, from frizzy artist Jilly Coppercorn to the silly but dangerous Crow Girls. If you haven't read de Lint, I suggest you start where I did, with Dreams Underfoot. Here was a fantasy world set in modern times, in a fictional North American city, full of people I wanted to hang out with, monsters barely glimpsed or overt, and a sense of wonder as great as any I'd found in epic fantasy. And though I love the grand scale worldbuilding in most science fiction and fantasy, Newford is a more accessible fantasy world.

And then came Gaiman's dark, beautiful prose. Neverwhere and its London Below showed an unseen world right under the noses of everyday people. I had to read more, and fell head over heels for American Gods and then his collaboration with Pratchett, Good Omens.

In more recent years, I've been infatuated with Jim Butcher's Dresden Files books, each one more over the top than the last. Butcher mixes wizards, vampires, werewolves, deadly fairy folk, skinwalkers, and even mobsters in the familiar world of 21st century Chicago. I didn't tell you I was a Philip Marlowe fan, but that's one reason I love Harry Dresden so much. Butcher infuses a touch of noir and mystery into wondrous magic and supernatural danger that's impossible for me to refuse.

So when I set out to write my first urban fantasy novel, Four 'til Late, I meant to emulate that magical realism that charmed me into reading the subgenre in the first place. I wanted the reader to be drawn into the world of the Road Ghosts bit by bit, from normal to supernatural to paranormal. In Sinking Down, I let myself be a bit more overt, more tangible with the fantastical elements of the story. Me and the Devil (coming this spring) builds on the other two and moves further into fantasy, while remaining in our own world - or at least alongside it.

So why do I love urban fantasy? Because the author's armchair world is so like our own. The characters are often people we could meet downtown and never know their true nature. Are there punk elves out clubbing, or maybe gothic goblins taking up the sofas at Starbucks? Wouldn't it be cool if there were? 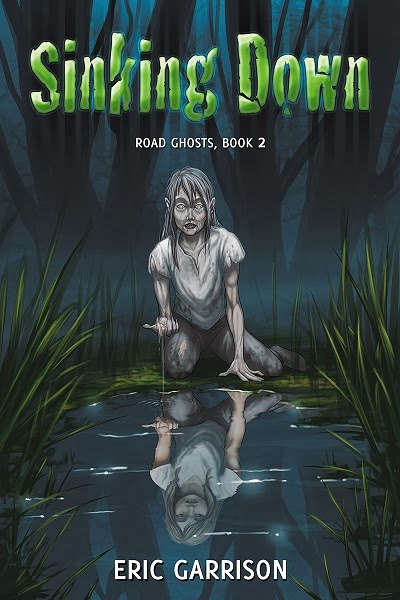 Sinking Down: Poor Little Ghoul Paranormal investigators Brett and Liz find themselves back in over their heads when a forest hunt for a roadkill-eating creature offers up a little surprise. Back home with their ghoulish house guest, it becomes clear there’s more to this investigation than either of them thought. Worse than that, Brett's own fate is linked to the little ghoul's.

So it's back out on the road, with plenty of time for pit stops with a greedy ex, a convention of ghost hunters, partying with fake vampires, and even drinking and fighting alongside good ole Uncle Gonzo. But as the investigation goes deeper, and unseen connections come to light, Brett finds there’s much more at stake than getting through a rough patch with Liz.

A rescue mission. A race for a cure. New friends and old adversaries. Unbreakable bonds and supernatural danger. It’s going to be a wild ride. Can the friends save the nearly undead tween? Can she and Brett stop themselves from ...Sinking Down?
Sinking Down is the 2nd Book in the Road Ghosts Trilogy! 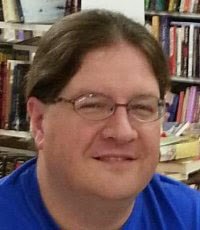 Website-Facebook-Twitter
Eric Garrison is active in the writing community in Indianapolis, Indiana. He lives in the Circle City with his wife, step-daughter and four cats. He also enjoys gaming and homebrewing beer.

Seventh Star Press published the first of his Road Ghosts trilogy, Four 'til Late, in July of 2013. Sinking Down was released in December of 2013, with the final title to appear in 2014.

Eric's novel, Reality Check, is a science fiction adventure released by Hydra Publications. This book reached #1 in Science Fiction on Amazon's Kindle store during a promotion in July 2013. 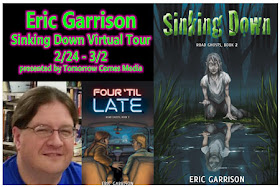