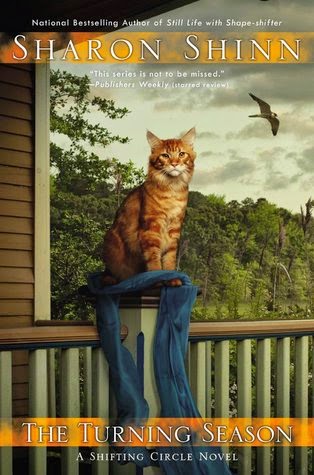 
In national bestselling author Sharon Shinn’s latest Shifting Circle novel, a woman must choose between hiding her nature—and risking her heart...
For Karadel, being a shape-shifter has always been a reality she couldn’t escape. Even though she’s built a safe life as a rural veterinarian, with a close-knit network of shifter and human friends who would do anything for her—and for each other—she can’t help but wish for a chance at being normal.

When she’s not dealing with her shifts or caring for her animal patients, she attempts to develop a drug that will help shifters control their changes—a drug that might even allow them to remain human forever.

But her comfortable life is threatened by two events: She meets an ordinary man who touches her heart, and her best friend is forced to shift publicly with deadly consequences.

Now Karadel must decide whom to trust: her old friends or her new love.

Is any one of us really normal? Not Karadel, she is far from it, she is a shape shifter who longs to have a normal life. That’s why she is determined to create a drug that hopefully will help her kind stay human forever or at least longer.
Karadel is also a veterinarian who has set up a safe life for herself. The shape shifter world is a secret to humans, however Karadel has both human and shifter friends who would do anything for her and for each other. To what extent would they go?
The story started slow and kept that pace throughout. I liked the characters and I think I liked Alonzo the best even though he was quiet and reserved. Once you read you will understand why, it was for good reason. Joe, Karadel’s human boyfriend was another character I liked, he seemed to just take things in stride. I felt sorry for him, especially after the story he told about his ex-wife and dancing. Then I felt even sorrier for him with what happened between Alonzo and him. Talk about bad luck on both sides.
I can’t say I loved the book. It was not an action packed page turner. I took a step back when I was done to think what Shinn was really trying to portray and as I thought about it I don’t think it was about the action, but more the relationship between the characters themselves, their love and trust. If that is what you are looking for then I suggest reading this. However, if you are looking for something that puts you on the edge of your seat, this is probably not the book for you.
3.25 Shifter Sheep

About the Author:
website-FB
Sharon Shinn is a journalist who works for a trade magazine. Her first novel, The Shape-Changer’s Wife, was selected by Locus as Best First Fantasy Novel of 1995. She has won the William L. Crawford Award for Outstanding New Fantasy Writer, and was twice nominated for the John W. Campbell Award for Best New Writer. She has also received an RT Book Reviews Reviewers’ Choice Award and won the 2010 RT Book Reviews Career Achievement Award in the Sci-Fi/Fantasy category. A graduate of Northwestern University, she has lived in the Midwest most of her life. Visit her website at sharonshinn.net.
Sharon Stogner at 12:00 AM
Share